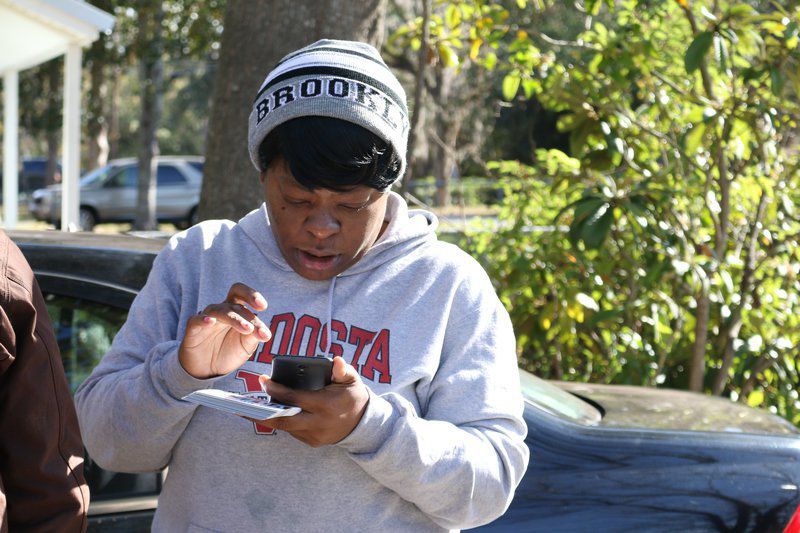 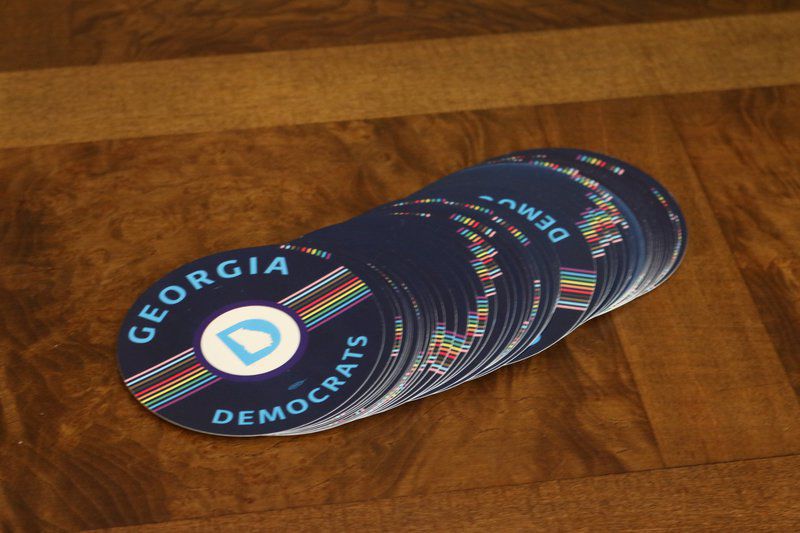 Derrek Vaughn | Valdosta Daily TimesWith stickers and literature in hand, canvassers from the Democratic Party of Georgia knocked on doors Tuesday in Valdosta. 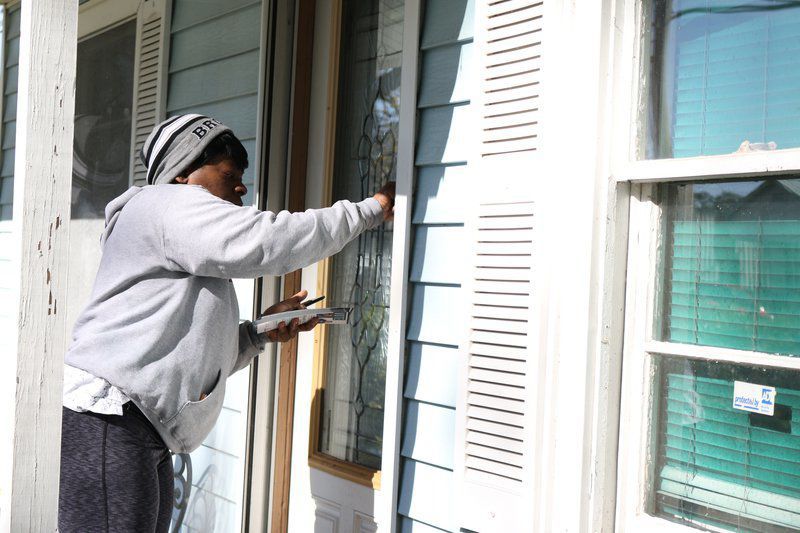 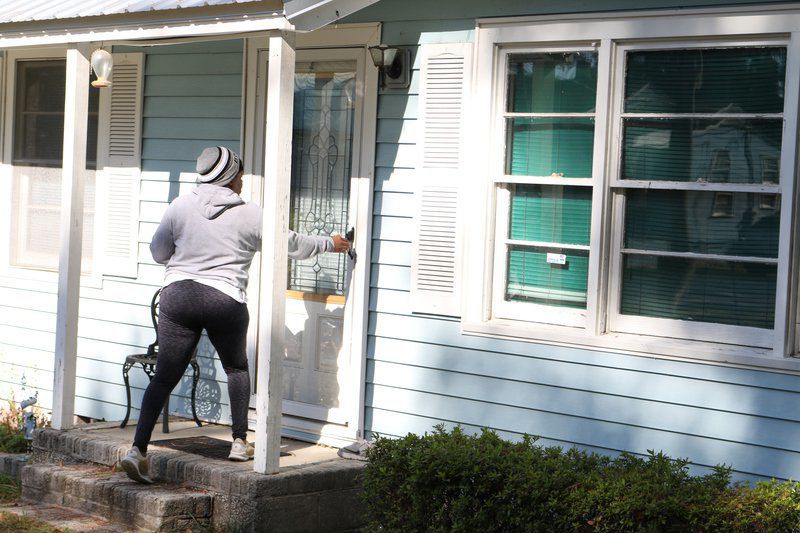 Derrek Vaughn | Valdosta Daily TimesGlenda Jackson said she was excited to canvass for her first time as she knocked on doors for the Democratic Party of Georgia Tuesday.

Derrek Vaughn | Valdosta Daily TimesWith stickers and literature in hand, canvassers from the Democratic Party of Georgia knocked on doors Tuesday in Valdosta.

Derrek Vaughn | Valdosta Daily TimesGlenda Jackson said she was excited to canvass for her first time as she knocked on doors for the Democratic Party of Georgia Tuesday.

The Democratic Party of Georgia strolled down Interstate 75 to help coordinate a Get Out The Vote effort for the nonpartisan runoff races for Valdosta mayor and the Valdosta City Council at-large seat.

Volunteers walked house to house with literature about why J.D. Rice and Adrian Rivers should receive residents' votes.

Tuesday's runoffs resulted in Matheson leading Rice by 123 votes with 130 provisional ballots and three mail-in ballots left to be counted. Meanwhile, incumbent at-large Councilman Ben Norton retained his seat by defeating Rivers with 604 more votes. All results are unofficial until certified by the elections office, expected this Friday.

The effort is part of a statewide effort to focus on municipal runoffs in Valdosta, Savannah and metro Atlanta, said Scott Hogan, executive director of the DPG.

With shifts from 10 a.m.-2 p.m and 3-7 p.m. Tuesday, 20 Democratic Party of Georgia volunteers knocked on doors in hopes of convincing residents to head to the polls in favor of Rice and Rivers.

The DPG is not coordinating with the Rice or Rivers campaigns because state party efforts are independent expenditures to comply with campaign finance law, said Justin Pitts, director of organizing and outreach of the DPG.

Also, the city seats are non-partisan, meaning candidates do not run as Republicans or Democrats.

Tthe DPG was not involved with the Nov. 5 election because five candidates ran for mayor and four ran for the at-large seat, Pitts said. Narrowed down to two for the runoffs, the DPG identified Rice and Rivers as the candidates whom they would support.

With their preferred candidates recognized, the DPG felt confident in the efforts around Valdosta.

"I think GOTV efforts leading up to Election Day certainly can make the difference in a tight race," Hogan said. "In a low turnout, in an off-year, in an off-cycle race - especially a runoff - this late-stage effort all the difference in the world, and that's why we're putting the resources into it."

Hogan and the DPG expected the mayoral runoff to be a tight race, so the organization sent down a GOTV team locally in addition to text messages to residents about voting and Election Day.

"We have made a determined effort under our new chairwoman, Sen. Nikema Williams, to get involved at every level of government from the bottom of the ballot up to the top of the ballot down," Pitts said.

Henceforth, the DPG plans to compete and support candidates in statewide elections.

"It's our full expectation to play in as many places throughout the state as we can," Hogan said. "We feel very good about this race and races around the state."

The Tuesday runoff was different than the typical election, however.

"Runoffs generally have lower turnout than regular elections," said Trey Hood, professor of political science at the University of Georgia.

Mentioning that low turnout in elections in Georgia usually benefit Republican candidates, Hood, an expert in Southern politics and election sciences, said he couldn't determine what effect the DPG GOTV effort would have on the runoff races.

"It might be negligible, but anything can tip the balance potentially when the turnout is so low, especially given around the holidays," Hood said. "It certainly can't hurt if they can induce even a couple hundred of people to get to the polls who weren't already predisposed to doing that, it could have an impact potentially."

Pitts specified that canvassers targeted only two types of voters: residents who had not already voted early and residents in danger of being purged from voter rolls.

"The only thing we paid particular interest to is also tied in with voter protection," Pitts said. "The secretary of state released a list of voters being purged and so we did specific outreach to those folks, because if they vote today, then that will reactivate their voter registration and they're not at risk of being purged."

Volunteers such as Christina Turner had their own interpretations of the GOTV's impact on the runoffs.

Turner, a second-year student at Wiregrass Georgia Technical College majoring in business management, was one of the volunteers knocking on doors Tuesday.

Saying Pitts reached out to her after Thanksgiving, Turner canvassed for Stacey Abrams in the 2018 Georgia gubernatorial race and was activated along with several others who helped in the Abrams campaign.

Two hours into her shift, Turner's effort touring through East Mary Street and Marion Street had been mostly for naught.

Glenda Jackson, another volunteer paired with Turner, agreed citing the time of day and being a Tuesday.

"It's early morning so everyone's at work," Jackson said.

With confusion over where to meet that morning, the pair was skeptical about organization.

"As far as coordinating the effort, I don't think it was really planned," Turner said. "Seemed like it was spur of the moment."

Turner and Jackson said they believed the GOTV effort would be rendered ineffective.

"You might get one or two (voters)," Turner said. "In the grand scheme of things, does one make a difference?"

"I don't think it's going to (benefit Democrats)," Turner said. "The fact that it is today — most people already have plans made and the areas we're canvassing, a lot of people would need to coordinate transportation."

Pitts said the Lowndes County Democratic Party coordinated rides for voters to the polls and that canvassers were provided with the phone numbers for the ride dispatch.

Jackson, a recent graduate from Valdosta State University with a master's degree in public administration, saw a need for structure change to transform people in the surrounding neighborhoods into consistent voters.

"This is a no-income area, as we say in Valdosta, so, a lot of people here, in terms of voting and being reached out to, we haven't — I don't want to say neglected them — but we haven't brought them into what voting is all about," Jackson said. "Without doing this on my own and canvassing and asking do they (know) J.D. Rice and Adrian (Rivers), they'll be like, 'no,' so how are you going to vote for somebody if you don't know their policies and you don't know who they are?"

Citing the need for more diversity in Valdosta political offices, Jackson said she was excited to become more involved in local political and canvass more. Turner said she wanted the canvassing approach to change from telling people to vote today to a more strategic method of talking about policies. She said involving churches would be a more effective way to get voters to the polls.

Turner said she believed the intention of the GOTV effort in Valdosta was more about exposure than efficacy.

"Personally, I think $1,200 probably has been thrown at this particular day just to say, 'yeah, we got out in Valdosta, and we talked to some people to go vote,'" Turner said.

She echoed Jackson's belief of long-term structural change being the best route to energize voters.

"I feel like if this was really a big deal, then it's something that should have gone on for a while," Turner said.

Once he heard Turner and Jackson's concerns, Pitts said that having months to plan and build outreach infrastructure is the most effective method, but that was not possible with Valdosta with so many candidates running for mayor and the at-large seat.

"I think we were concerned about people being out of town last week," Pitts said. "We feel like the most effective bang for our buck would be to have this big GOTV push, as opposed to having a diffuse campaign over a week or two when you have Thanksgiving in the mix."

Acknowledging the one-day push was not the perfect formula, Pitts remained hopeful efforts would ultimately push Rice and Rivers over the line.

"Ideally, we would have a longer term build, but if it's a question spreading out a couple canvasses here and there over a couple weeks or having 20 shifts for GOTV on Election Day, I would go with the latter," Pitts said.