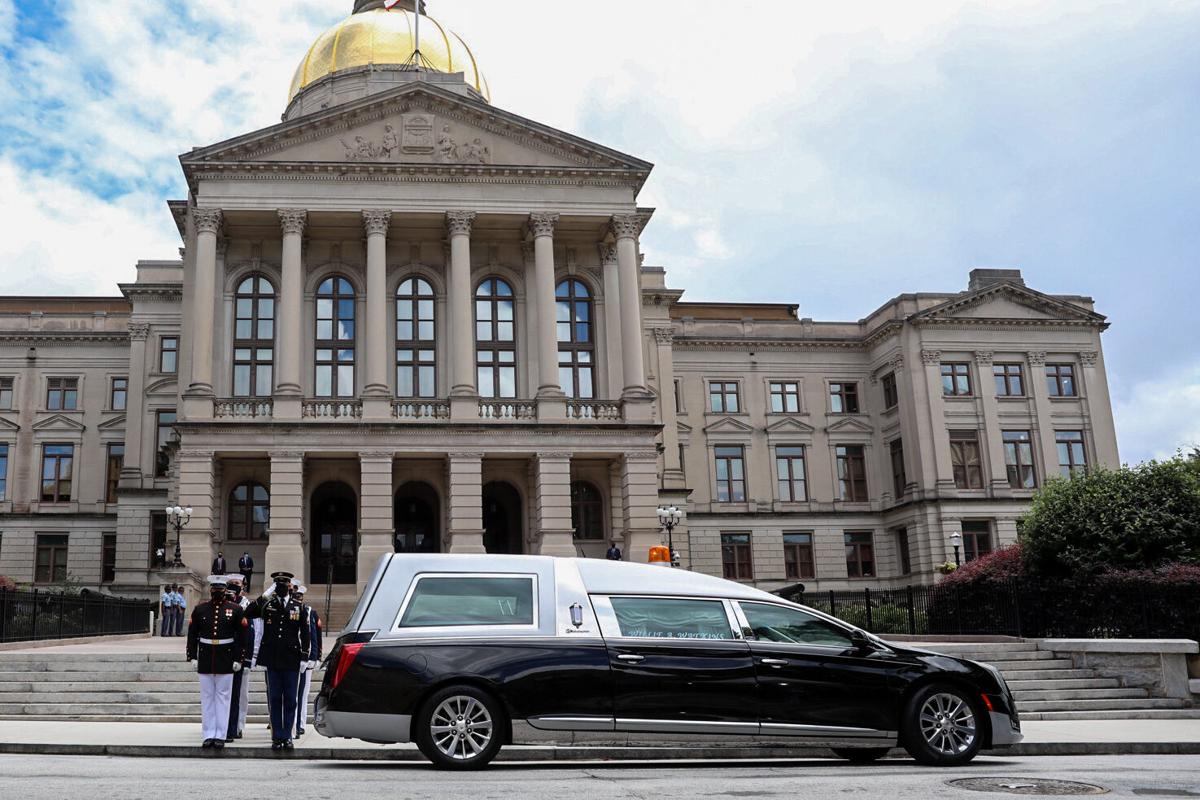 The casket carrying Georgia Congressman John Lewis makes its way into the Georgia State Capitol Building to lie in the rotunda on July 29 in Atlanta. 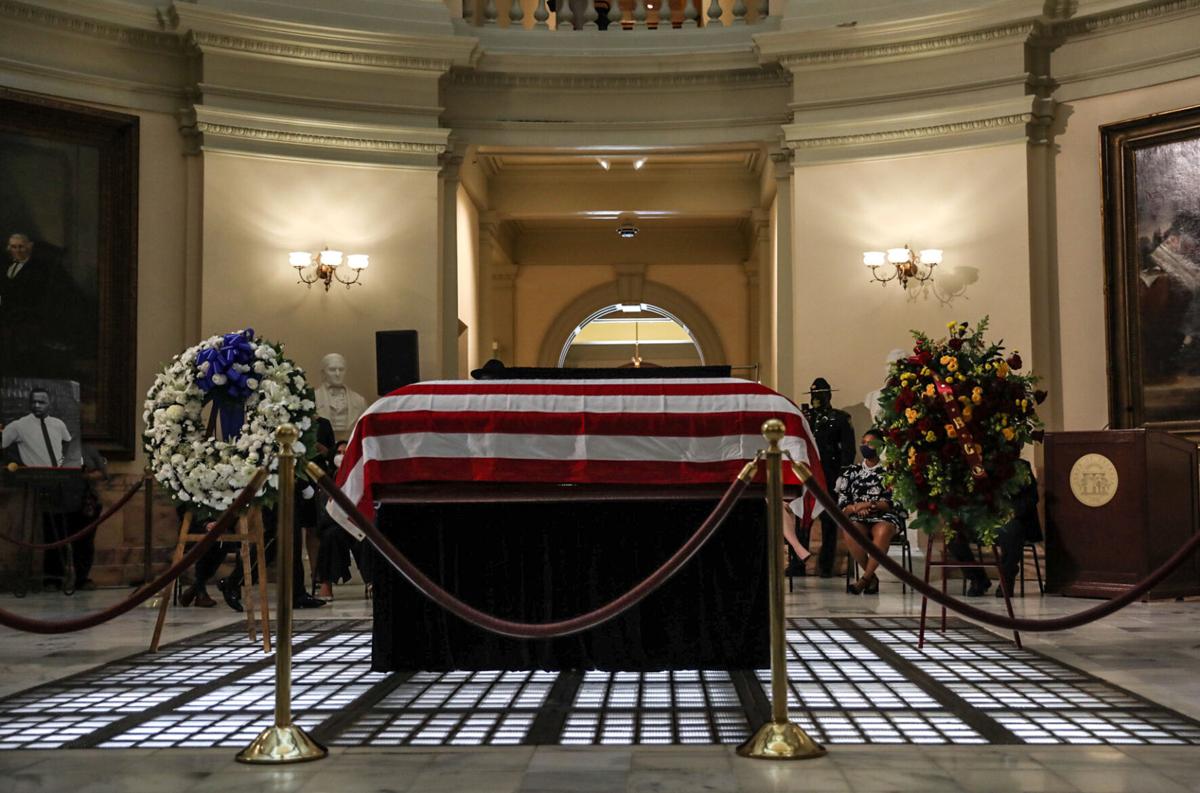 The casket of Georgia Congressman John Lewis lie in the Georgia State Capitol rotunda as lawmakers and the public paid their respects on July 29. 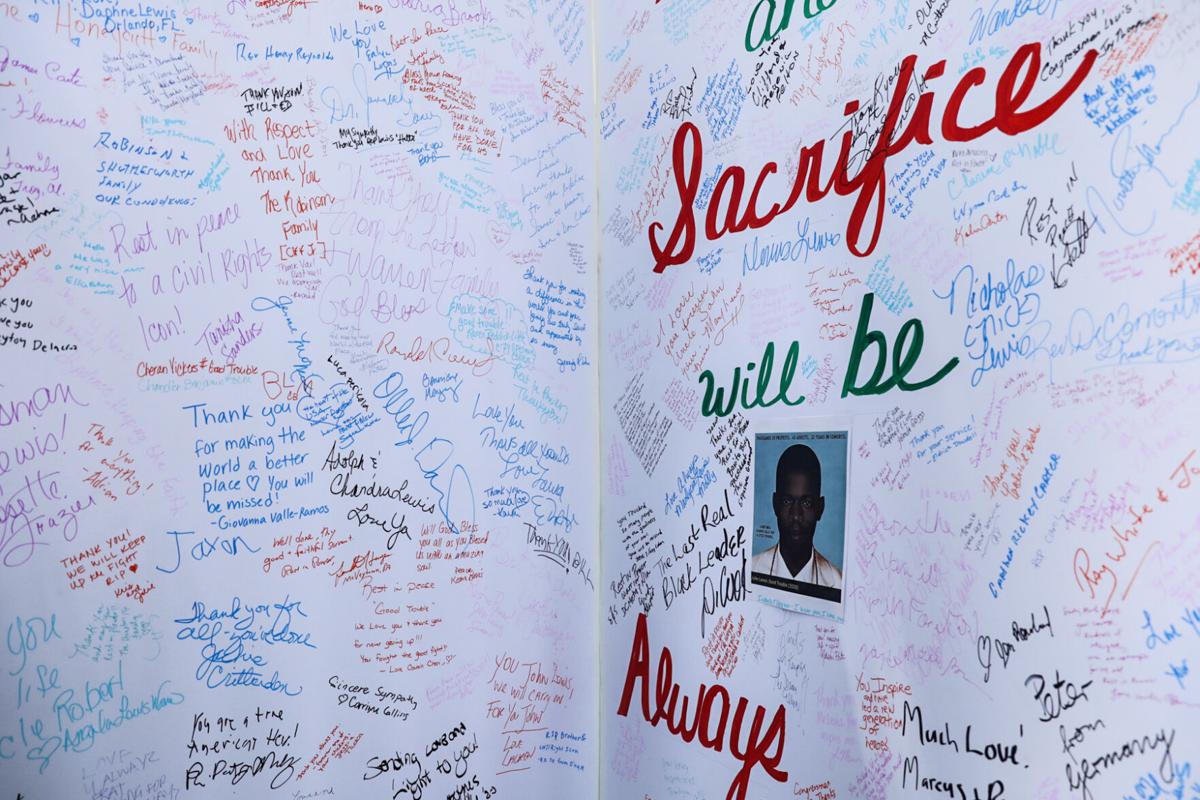 Mourners sign the "world's largest sympathy card" with condolences and memories of the late John Lewis on July 29 in Atlanta.

Including the bells of the historic Ebenezer Baptist Church where — 52 years after similar services were held there for Martin Luther King Jr.  — a funeral celebrated and commemorated the life of Lewis.

Lewis’ family, friends, civil rights icons, King's descendants and three former presidents paid tribute to the congressman and pleaded with Americans to uphold his legacy of “good trouble” — a term Lewis coined for his nonviolent activism.

The civil rights icon died at the age of 80 years old after being diagnosed with pancreatic cancer. Atlanta, his adopted hometown, was his casket’s last stop on a celebration of life tour before being laid to rest next to his wife, Lillian, who died in 2012.

On Thursday, Lewis was remembered as a "founding father" of a "better America."

But as Lewis knew and wrote in an article published posthumously Thursday in the New York Times “the march is not over.” Leading activists and political figures framed his departure as an opportunity to renew the call for a better country.

Former President Barack Obama ended the service with a nearly 40-minute speech recalling Lewis’ childhood, fight for equal rights and victories in the fight to “preserve our democracy.”

"I came here today,” Obama said, “because I, like so many Americans, owe a great debt to John Lewis.”

Remembering the ‘boy from Troy’

To honor his homegoing, many who gave eulogies at Lewis’ invitation-only funeral service remembered the vision and hope he had for America.

“Instead of preaching sermons, he became one,” he said. “He became a living, walking sermon about truth-telling and justice-marking on the earth. He loved America until America learned how to love him back.”

Lewis' legacy — which began as a poor boy from Alabama — wound its way through Freedom Rides to the March on Washington and finally across the Edmund Pettus Bridge on Bloody Sunday where he almost lost his life.

Obama said in pictures from that day Lewis “looked so young” and yet “full of purpose.” Around the age of Obama’s daughters, Lewis in hand with other civil rights activists were “on their own to challenge an entire infrastructure of oppression.”

“John Lewis did not hesitate. He kept on getting on buses and sitting at counters. He got his mugshot taken again and again on a mission to change America,” the former president said.

But civil rights leader James Lawson, now 91, who helped organize workshops in Nashville that Lewis attended, implored that his memory of the movement be remembered as he would have remembered it.

“John Lewis called what we did the nonviolent movement of America,” he said. "Not the (Civil Rights Movement). I think we need to get the story straight because words are powerful.”

Like many, the Rev. Bernice King, the youngest child of Martin Luther King Jr., upheld Lewis as a "nonviolent warrior who fought for true peace.”

Lewis was beaten and nearly killed many times while advocating for equal rights. Former President George W. Bush joked that Lewis' first nonviolent protest was refusing to eat chickens he had raised on his farm as a boy.

Every beating Lewis took, former President Bill Clinton said, was for what he believed his community could be. Later in his life, Lewis even extended a hand across the aisle of Congress to achieve his aspirations for legislation such as the consequential and historic Voting Rights Act of 1965.

“He got into a lot of Good Trouble along the way,” Clinton said. “But let’s not forget he also developed an absolutely uncanny ability to calm troubled waters.”

U.S. Speaker of the House Nancy Pelosi and Lewis’ staff remembered the “mischievous” and hardworking congressman who roamed the halls in Washington, D.C. Always inherently late because he never failed to stop and take a picture with admirers.

Pelosi spoke of the time Lewis staged a sit-in on the House floor in response to blocked gun control legislation. Until his final days, she said, he "nonviolently insisted on the truth.”

On the last night that the civil rights icon’s body lay in the U.S. Capitol, Pelosi said a double rainbow crossed the sky — although there was no rain.

“He was telling us, ‘I’m home in heaven,” she said. "We always knew he worked on the side of angels, and now he’s with them.”

Speakers lifted up the somber occasion Thursday with personal tales of the quirky legend.

His staff said their boss treated them as his family — if they could keep up with him, that is. In a powerful description, Jamila Thompson, Lewis’ deputy chief of staff, called the congressman “both human and divine."

“Working for him was a little bit of a nightmare sometimes, because no matter how hard we worked, he always worked harder,” Thompson said. “Every day he woke up at the crack of dawn, watched the news and read the newspapers. His memory was a living encyclopedia.”

Just as Lewis treated his staff as his own, she said, his family was the most important thing to him. He never missed a call from his wife or son.

Xernona Clayton, civil rights leader and founder of the Trumpet Foundation, detailed the calculated steps she took to bring Lewis and his wife, Lillian, together. Clayton tricked the two into meetings and convinced Lillian to give Lewis a chance even though he was rather “slow” in character.

“I want you to know they were very happy,” she said. “But she absolutely didn’t like politics. But when John expressed an interest, Lillian got in there and became his strongest supporter.”

While former Atlanta Mayor Bill Campbell grouped Lewis with the likes of Mahatma Gandhi, Martin Luther King Jr. and Nelson Mandela, for members of his family, Lewis was just known as “Uncle Robert.”

“While we knew how important he and his work was to the world, when we were with him, we saw him as Uncle Robert,” Sheila O’Brien, Lewis’ niece, said. “… His love was contagious and could be felt every time you were in his presence."

Before he passed away, Lewis gave The New York Times an essay to run on the day of his funeral.

“While my time here has now come to an end, I want you to know that in the last days and hours of my life, you inspired me,” the civil rights icon wrote to the nation.

Lewis passed as America is gripped in social unrest and widespread protests calling for civil justice to play out in the streets of major cities to the rural country.

It was not lost on the politicians nor the friends and family of Lewis at his funeral that his passing is a call to uphold his vision for the future.

Bush concluded his tribute stating: “the story that began in Troy isn’t ending here today. Nor does the work."

Obama said Lewis “never gave up and stopped speaking out because he saw the best in us” and future generations owe him a debt to continue in the same manner.

“Despite this storied, remarkable career, he treated everyone with kindness and respect because it was innate to him. This idea that any of us can do what he did — if we’re willing to persevere,” Obama said. “He believed in all of us there exists the capacity for great courage.”

While it was a day to honor the life of the "boy from Troy," as King called Lewis, Obama called out today's “attacks on our democracy” condemning the use of federal agents against peaceful protestors and blatant voter suppression.

“Even as we sit here,” he said, "those in power are doing their darnedest to discourage people from voting by closing polling locations, targeting minorities and students with restrictive ID laws and attacking our voting rights with surgical precision."

One of Lewis' legacies included championing the Voting Rights Act of 1965, which has been proposed to be renamed after him.

“He said as long as he had a breath in his body, he would continue to do what he could to preserve our democracy. As long as we have breath in our bodies, we have to continue that cause,” Obama said.

He implored the public to not treat voting like an “errand to run” but as an “important action taken on behalf of democracy.”

Campbell said during their last visit Lewis pulled him close and said: “Everyone has to vote in November. It is the most important election ever."

The sentiment was echoed in nearly every speech given and on display even by the mask that Stacey Abrams, former 2018 Georgia gubernatorial candidate, wore in the audience — it read "vote."

“To really give meaning to the John we love,” Xernona Clayton said, “vote."