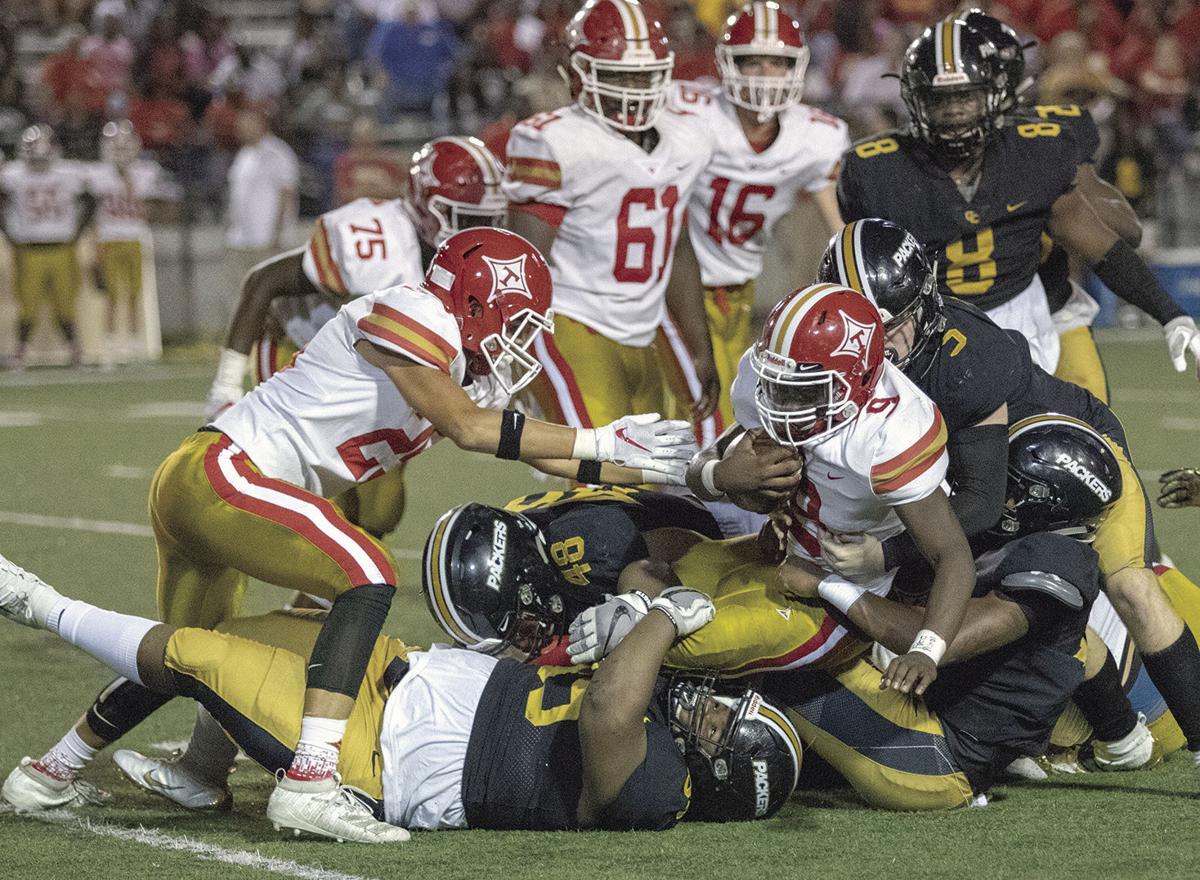 It’s Vendarion Knighton on the turf with LaQuavian Haynes and Callon Kubiak bringing down Thomasville’s Ricky Fulton Friday as Colquitt County shut down the Bulldogs on Tom White Field at Mack Tharpe Stadium. 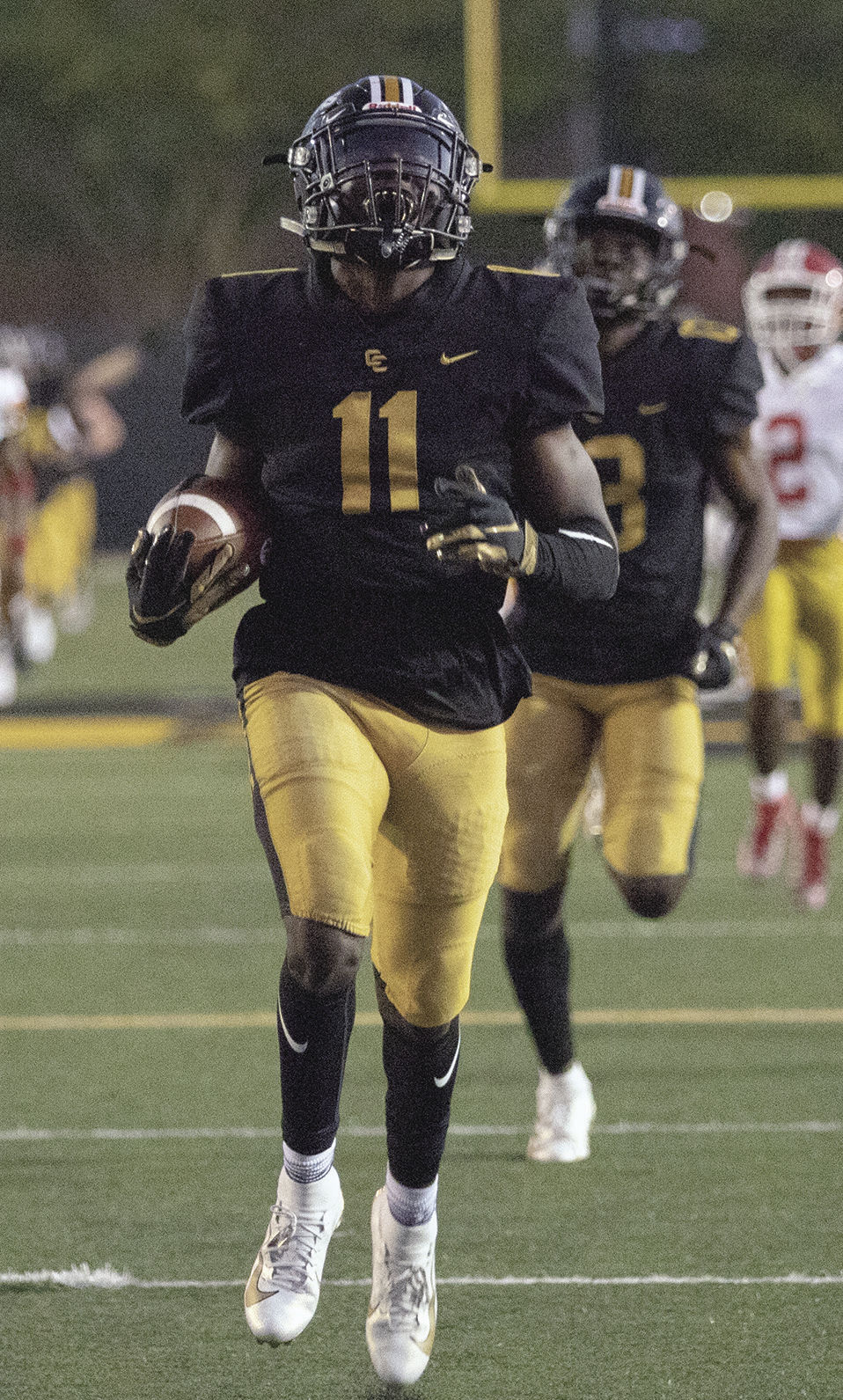 Tajh Sanders heads to the end zone scoring a 78-yard touchdown for Colquitt. 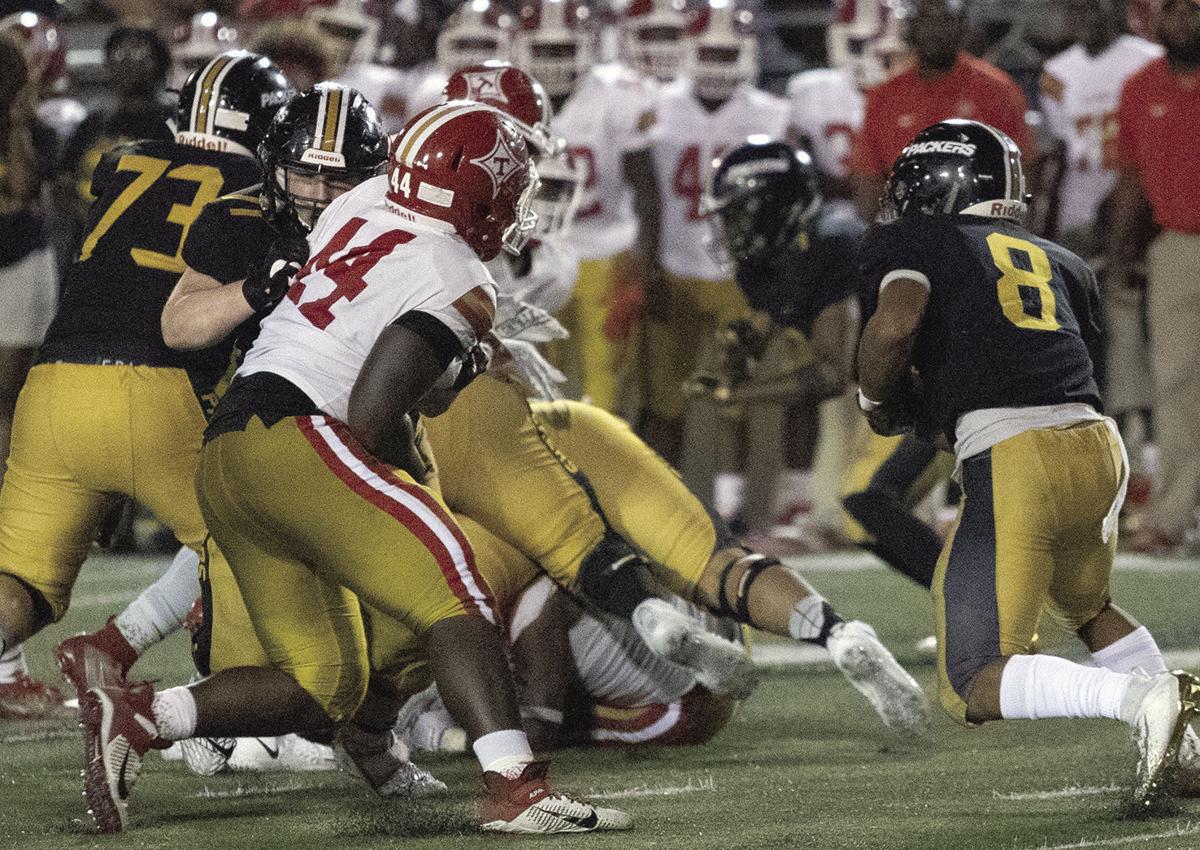 Mar’Kayvion Spradley goes for some of his rushing yardage in Colquitt’s second win in as many games. Guard Connor Gay gives Spradley a block.

It’s Vendarion Knighton on the turf with LaQuavian Haynes and Callon Kubiak bringing down Thomasville’s Ricky Fulton Friday as Colquitt County shut down the Bulldogs on Tom White Field at Mack Tharpe Stadium.

Tajh Sanders heads to the end zone scoring a 78-yard touchdown for Colquitt.

Mar’Kayvion Spradley goes for some of his rushing yardage in Colquitt’s second win in as many games. Guard Connor Gay gives Spradley a block.

MOULTRIE – On a night marred by many a ‘flag on the play’ announcement, senior Jaycee Harden shredded the Thomasville High defense for 341 passing yards and four touchdowns Friday as the top-ranked Colquitt County High Packers won easily for the second year in a row in this series of neighboring schools 45-3 on Tom White Field at Mack Tharpe Stadium.

It was one of the more efficient efforts in the passing game one can see, Harden going 21-for-27 while playing not even three full quarters. His top target of the night was sophomore Tajh Sanders, who caught six footballs for 103 yards with one touchdown. Lemeke Brockington got into the end zone twice among his four receptions for 97 yards.

Running back Daijun Edwards went over 100 yards for the first time this season, and he scored twice. In all, it was a nine-rush game for 108 yards, 105 coming in the first half.

No one has yet to score a touchdown on the now 2-0 Packers, who will see that factor put to the test facing Tate Rodemaker and the Valdosta High Wildcats on the road next weekend. Thomasville, under former Colquitt County assistant Zach Grage, dropped to 0-3, all three losses to schools THS would consider rivals.

But if it was all smiles and jubilation for the Packers leaving the field and boarding the buses, that would be a shock. Things were actually rolling along at a good pace, and Colquitt County up by three touchdowns in the first half, when midway through the second period one yellow marker followed another. Some fouls went against the visiting Bulldogs, but all the way to the end of the third quarter (when the scoring stopped) the Packers had been assessed 12 penalties for 113 yards.

Thomasville had six penalties from the start to the end of the third (the fourth quarter had the running clock) for more than 50 yards.

In a three-play series that featured an offensive holding call, Harden started the game going up top. Sanders hauled in the throw for 78 yards and the first Packer touchdown just 1:03 into the action.

Colquitt County, in head coach Justin Rogers’ first home game, put points on the board in its first three series. Edwards capped off a nine-play 77-yard drive with a 7-yard TD at 5:05 of the opening period. In this series, Harden hit Dijmon Wheeler on the 50 during a third-down pass. Wheeler added 11 more deep into Thomasville ground. From the 28, Mar’Kayvion Spradley followed guard Connor Gay’s block to the 7, and Edwards used tackle Remon Young’s wall to score.

Edwards continued his climb up the school’s all-time touchdowns scored list going 42 yards to the end zone at 2:48. He ended the night with 56 career TDs, three away from tying the mark of 59 set by Sihiem King in 2014. Center Trey McCoy put himself in front of would-be tacklers for Edwards to finish off another short series of three plays covering 61 yards.

Thomasville ran a lot plays, gained a lot of yards (106) and first downs (seven) in the opening quarter. Getting points on the Packer defense continues to allude foes. The first drive for the visitors – beginning on their own 25-yard-line – ended with a lost fumble taken away by Jordan Calhoun inside Colquitt’s 30-yard-line.

Down 21-0, the Bulldogs maintained a lengthy possession and were successful where the Georgia Bulldogs haven’t been lately: pulling off the fake punt. Punter Hurston Waldrep completed a pass for the six yards needed to convert fourth down still on their side of the 50. The visitors were then sniffing the ‘red zone’ as the second period began, but Zy Brockington, Ty French and Callon Kubiak forced Waldrep back inside the lines, this time to attempt a field goal.

He made the 35-yarder almost two minutes into the second period. Thomasville went down to 37 yards gained in the second quarter with only two first downs.

Jason Gallardo got the field-goal points back for Colquitt connecting from PAT distance for three at 4:10 until the break. This is when penalties started to pile up, the football going back and forth in the hands of the officials. Edwards broke through for a massive 31-yard gain to the THS 21, but with a sack on Harden Colquitt faced 3rd-and-12. The first of four flags on four straight snaps, holding, made it 3rd-and-30.

But the Packers were good at making up such ground. Harden scrambled to gain 21 yards of his own and draw a face-mask call. From the 10, the Packers moved backwards on minor infractions, but thanks to offsides on Thomasville Gallardo’s field goal was 20 yards.

Linemen Vendarion Knighton and Nathan Bell each had active games making stops, and they saw that the Packer offense retained possession with 2:15 remaining until halftime. Harden, with time, completed a ball to Lemeke Brockington 25 yards from the end zone. The play in all was 41 yards and seven more points for Colquitt at the 40-second mark. That put the game at 31-3 Packers at the half and set up a third-quarter that was complete domination by the home squad.

The Bulldogs gained one first down via penalty in the third quarter. Sophomore linebacker Ty’Li Lewis got into the action and made a textbook stop to bring up one fourth down and punting situation.

After going 11-for-15 for 176 yards in the first half, Harden was 10-of-12 in two third-quarter possessions. Because of penalties, he had to make up big yardage-to-go situations, but his receivers helped make that no issue at all.

Next, two fouls on one play turned 2nd-and-3 into 2nd-and-42 from Colquitt’s own 39. Orion Bonner made his first reception of the game on the THS 25 and went a bit more to convert first down at the 9. On the next snap, Bonner did a slant pattern and scored with 3:28 remaining in the third.

That gave Bonner 50 yards receiving. Wheeler caught three of Harden’s throws for 52 yards. He also had a seven-yard catch from Zane Touchton. Spradley carried the football five times for 55 yards.

MOULTRIE, GA.- Woodrow Wilson Boyd, 95, of Moultrie, died Thursday, January 23, 2020 at Cobblestone Health and Rehabilitation. Graveside rites will be 2:00PM Saturday, January 25, 2020 at Schley Cemetery with Mr. David Boyd officiating. Born April 13, 1924 in Moultrie, he was the son of the …