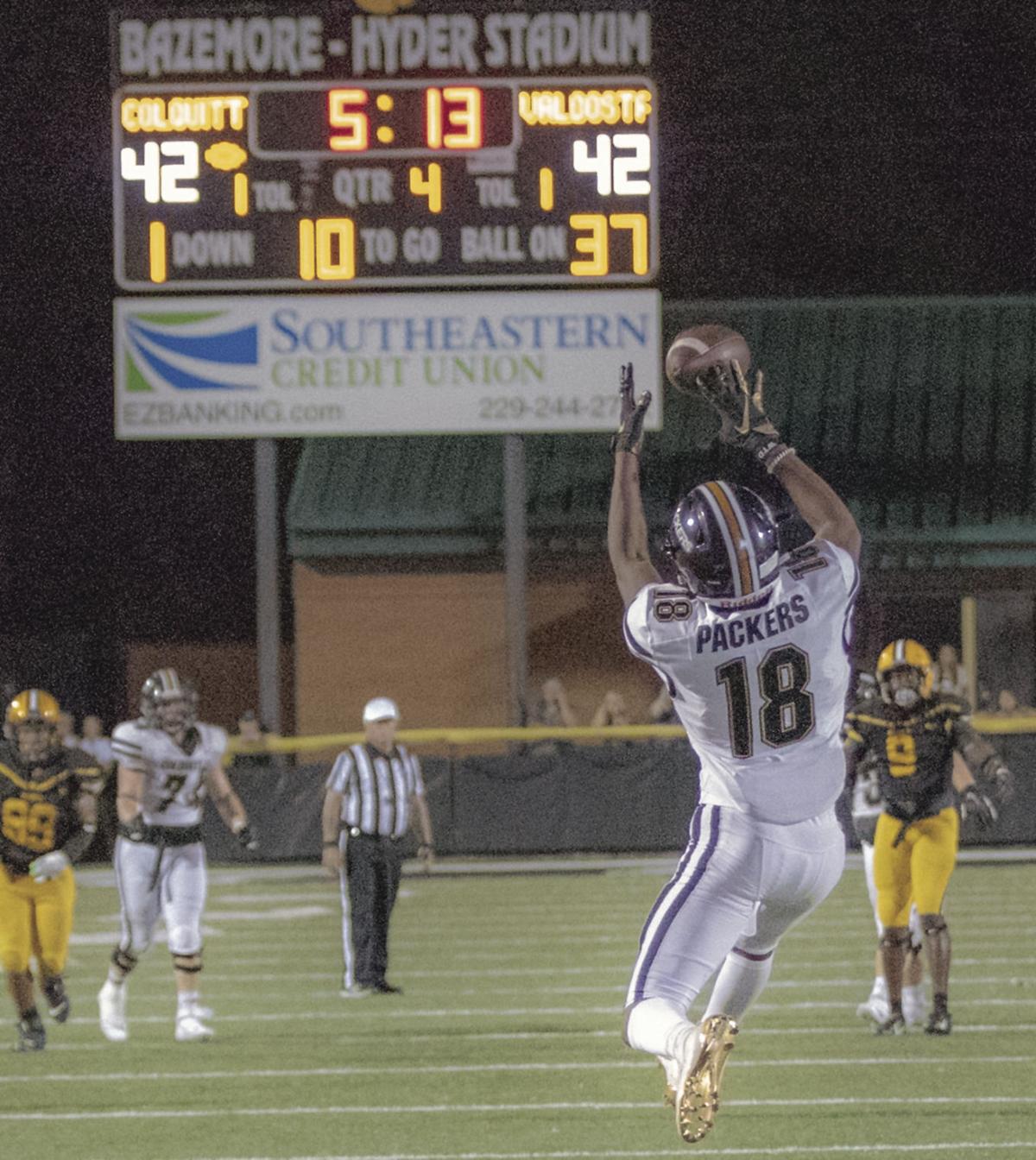 Colquitt County High receiver Dijmon Wheeler (18) catches what would give the Packers their only lead on the Valdosta Wildcats. 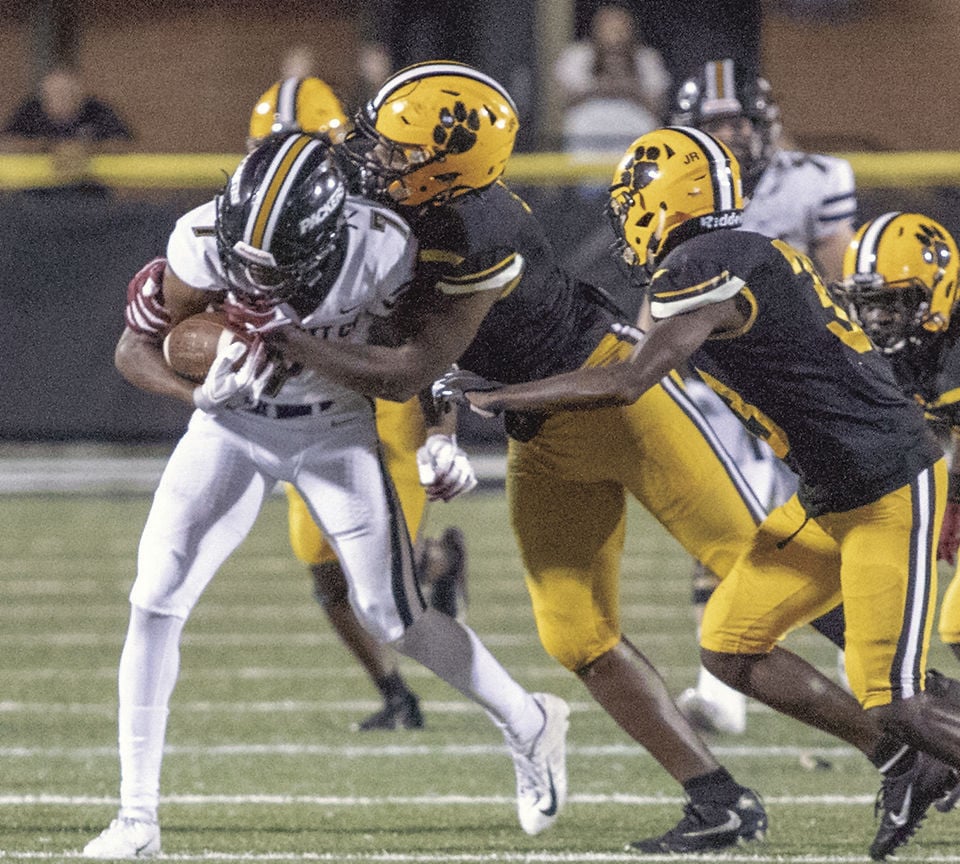 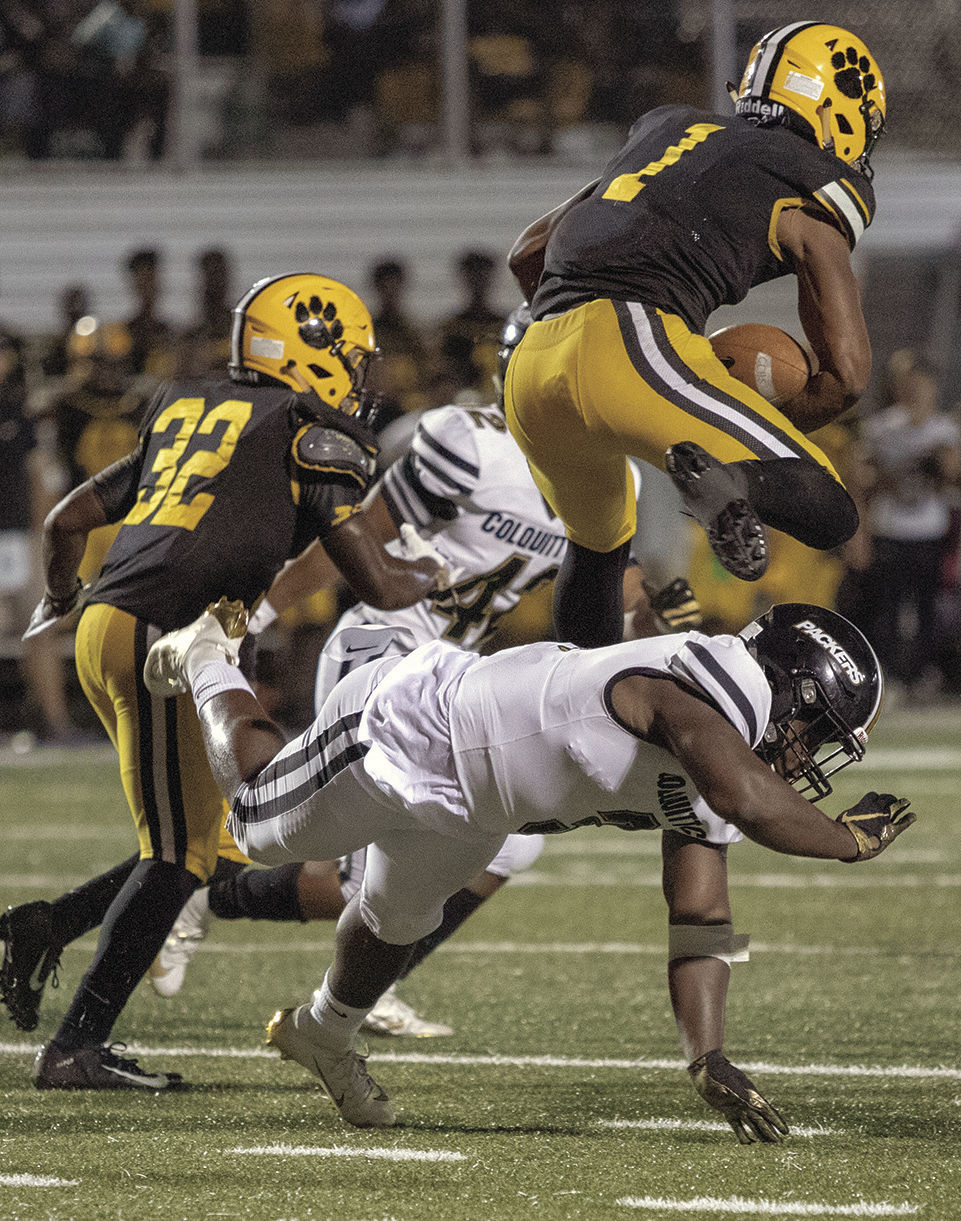 Colquitt County High receiver Dijmon Wheeler (18) catches what would give the Packers their only lead on the Valdosta Wildcats.

VALDOSTA – Instead of school records, it was a bunch of hearts that fell to the ground Friday as Jason Gallardo’s 41-yard field goal attempt was ruled wide right with 12 seconds remaining in a thriller of a football game between Colquitt County High and the Valdosta Wildcats. It was Valdosta, after pulling off the two-point conversion in the swinging gate formation, that came out on top 50-49 in a battle of No. 1 ranked unbeaten teams at Bazemore-Hyder Stadium.

Colquitt County, now 2-1, never led in this game until Jaycee Harden hit Dijmon Wheeler open for a 36-yard touchdown pass with 5:10 to play in the fourth quarter. That made it 49-42 Packers, and it was Harden’s fifth scoring toss of the game.

That TD total will be joining other names at No. 2 on the school record list for one game, as will Harden’s 419 yards on 26-of-43 passing.

Daijun Edwards rushed for 169 yards on 16 carries. He scored two total touchdowns to put him at 58 for his career, No. 2 on the all-time list and one away from a tie at the top. He is also inching closer to breaking the school record for rushing yards, so this coming Friday on Tom White Field at Mack Tharpe Stadium (vs. Warner Robins) could be a major one in Packer lore.

That wasn’t all for Edwards Friday. He caught four passes for 104 yards, which was second to Lemeke Brockington’s six grabs for 108 yards. He scored a touchdown, as did Tajh Sanders among his six receptions for 82 yards.

Valdosta had a big touchdown maker of its own in TJ Dailey. He scored five times, including a two-yard run when the Wildcats drove 80 yards, both taking the clock down to 1:05 and pulling them within one, 49-48.

After touchdowns, Valdosta always set up conversion plays with most of the players to the left of center with quarterback Tate Rodemaker ready to take a snap. This time, instead of descending into the normal kicking formation as the holder, he made good on his threat to take the football. William White was open to catch the two-point game-winner.

Still, Colquitt County made its move down field in the time remaining with Harden completing three passes for 58 yards. For Gallardo, who made all the PAT tries, it was only his second career attempt for 3.

Dailey, in addition to his touchdowns, gained 201 yards from scrimmage. Rodemaker, the senior son of head coach Alan Rodemaker, was 18-for-26 through the air for 305 yards.

It was a first half full of momentum swings. Valdosta jumped out to a 21-0 lead in the first quarter only to see Colquitt County pull to within one touchdown at the half 28-21.

While it was an opening full of Packer mistakes (making one wonder if there truly is something to this Friday the 13th myth), it never rattled the visiting team into veering away from the game plan. After two turnovers Harden threw three touchdown passes to three different receivers.

The moment of most importance, however, was the injury to linebacker Jordan Calhoun, who left Cleveland Field on a stretcher as a precaution in the second quarter. The Packers were already short some starters as both Zy Brockington and Carter Boatwright did not suit up.

Valdosta’s night began with Quinton Wade returning a fumble about 10 yards into the end zone on the first offensive play.

Though cornerback Antonio Spradley recovered a fumbled reception for the Packers, the offense was stagnant punting away the first two possessions with only three first downs. At 3:01, Rodemaker dumped a ball off under pressure to Dailey. He tiptoed the Packer sidelines to reach the end zone completing a 77-yard play.

Elijah Norwood, again on a first play by Colquitt’s offense, picked off Harden at midfield and returned it to the Packer 8. Dailey rushed for all eight yards on three totes and scored his second TD. At 1:46 still in the opening quarter, Valdosta was in command at 21-0.

But the Packer offense stayed with what it was doing, not trying to score all 21 points at one time. Harden completed his next 10 passes in a row. At 10:35 of the second quarter, the shutout was over on a pitch-and-catch to Tyler Walker on the 15. He turned it into a 22-yard touchdown.

Harden, at 7:31 from his own 25-yard-line, went up top to Lemeke Brockington, and the Packers had another touchdown to trail 21-14.

But on the series with Calhoun’s injury, Valdosta got its act back together culminating in Dailey’s third touchdown of the half. He gained 11 yards in three straight rushes, scoring from one out at 1:56.

But in that time Edwards’ authoritative 27 yard run got Colquitt going for one more push to paydirt. He also gained 24 catching the out pattern. Harden connected with Sanders from 33 out at the 59-second mark.

Valdosta’s second half started about the way Colquitt’s did with Rodemaker dropping the football while on the run. Pershaun Fann recovered for the Packers on the 49.

Edwards crushed a 49-yard run to the VH 12-yard-line, but a series of penalties slowed the drive to a drag pace. In fact, the second half was a big show of yellow, especially directed at Colquitt County. Twelve of the 14 flags on the visitors dropped after halftime, and all totaled they cost them almost 160 yards.

Finally, Sanders caught a pass on the 1, and Edwards cashed in the six points at 8:47. Finally, with Gallardo’s help, the game was level at 28-28.

Up next was a whole lot of bizarre, and Valdosta learned Packer players need to be tackled to stop a play. The defense led by Silas and Nathan Bell was doing the job of keeping the Wildcats in check, and the Packer offensive front steadily made the big holes for Edwards.

Still in the third quarter, officials ruled that punter Tucker Pitts put his knee on the turf after catching the snap. Valdosta took over on the CC 27. Due to penalties, Valdosta had further to travel, but it was no issue as Javonte Sherman caught Rodemaker’s throw to score and regain the lead for the Cats 35-28 at 2:05. The Wildcat receiving production wasn’t hurt either by Jaheim Bell’s third-quarter injury that caused a delay in the action.

It then becomes 42-35 Wildcats as they drove eight plays to cover 80 yards, and Dailey – in the wildcat formation – scored a four-yard rushing touchdown.

That scoring play was three snaps into the fourth quarter. As the Packer offense responded, Edwards scored his 58th Colquitt touchdown catching a ball in the flat from Harden on the 25. He dropped the football, got a fortunate bounce on the 19, and Wildcats watched him complete his journey to a 42-42 tie at 8:22.

Safety Nyquann Washington’s interception of Rodemaker came with seven minutes to play and set up Colquitt’s first leading possession. Fouls put the Pack at 1st-and-35 on that drive, but one more catch-and-run by Edwards wiped out all of that and moved the chains to Valdosta’s 36.

GROVETOWN, Ga. - Kim Singletary Land died Saturday, January 18, 2020 at her residence in Grovetown. Funeral services are pending at this time. Cobb Funeral Chapel has been entrusted with arrangements.

Mr. Leonard G. Lindsey, Jr., 91, of Adel, Georgia, passed away January 17, 2020 at the Legacy Village in Moultrie, Georgia. He was born April 10, 1928 in Colquitt County to the late Leonard G. Lindsey, Sr. and Opal Harrison Lindsey. Mr. Lindsey lived most of his life in Cook County and was t…

Mr. Raymond Pinkard Howell, 76, of Sumner, died on Thursday, January 16 , 2020 at his residence. The funeral service will be held at 2:00 PM on Tuesday, January 21, 2020 at Damascus United Methodist Church, interment will follow in the Damascus Cemetery. The Rev. Chuck Knight and Rev. Ronnie…