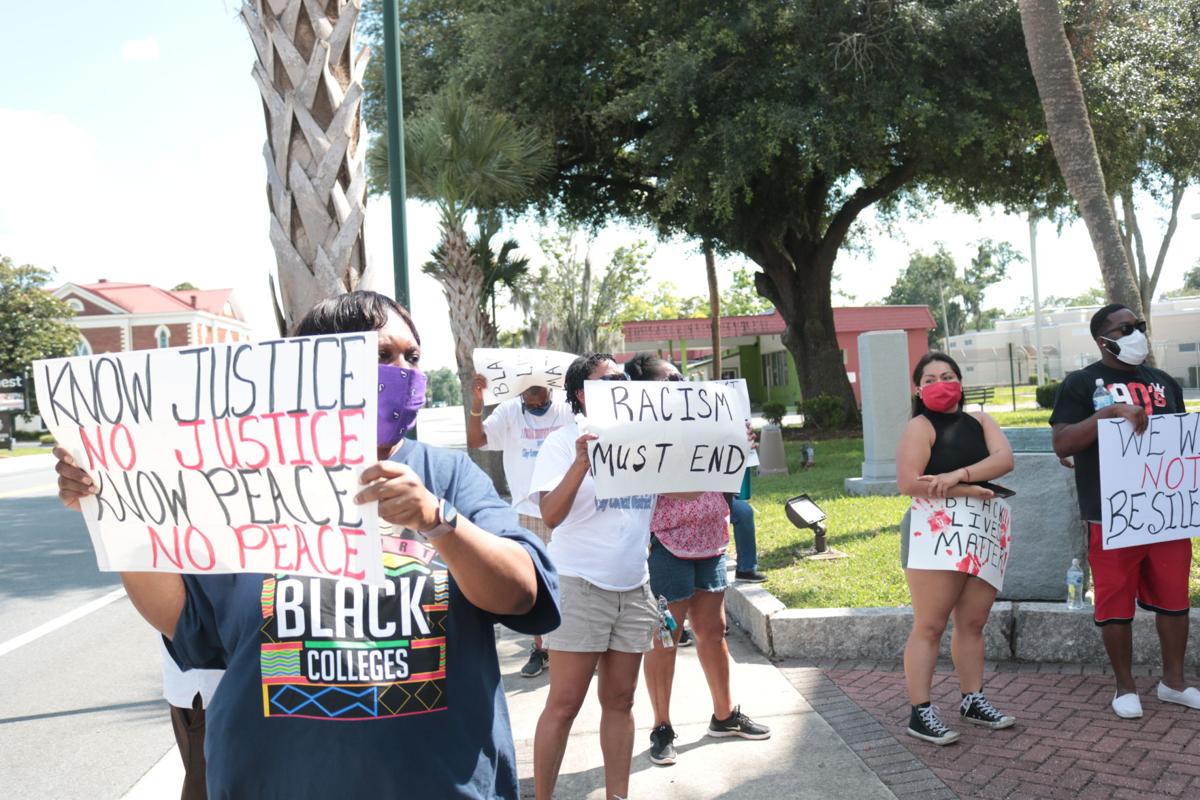 Those attending the Unity Rally on Sunday want peace and justice as well as an end to racism. 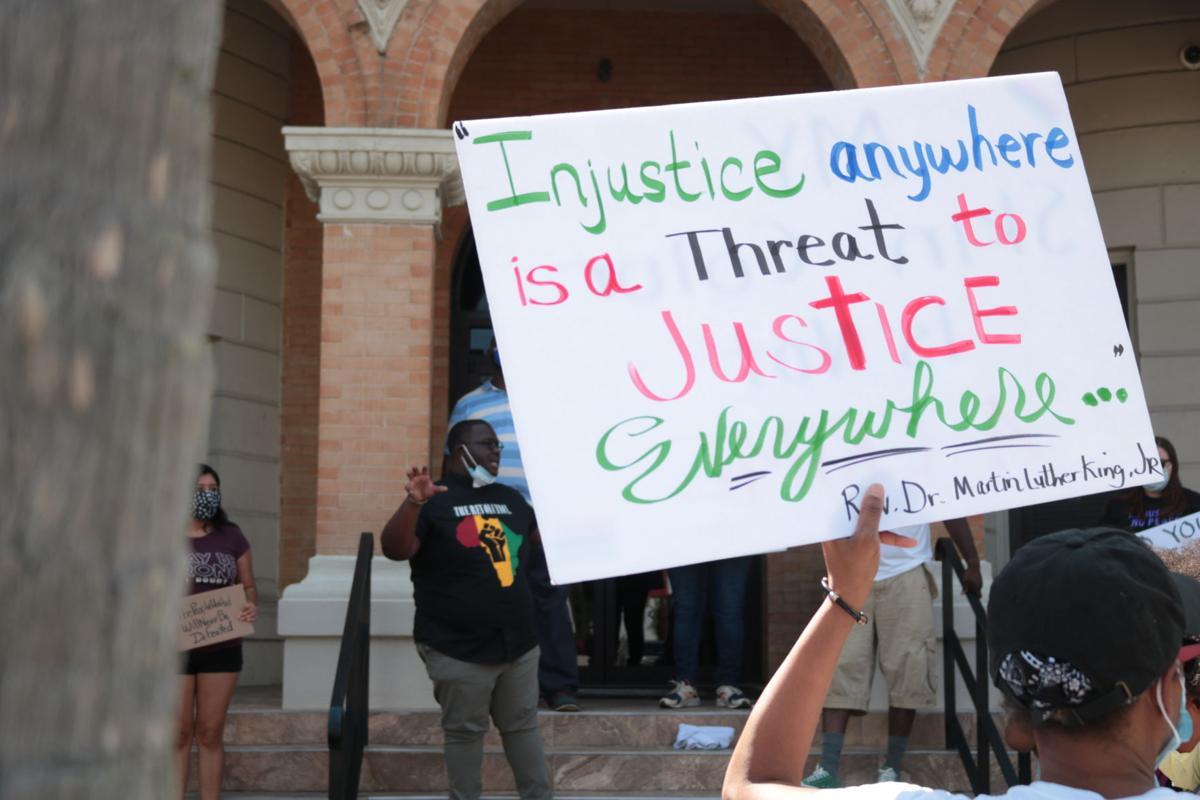 A sign quoting Dr. Martin Luther King Jr. is held at the Unity Rally in front of the Suwannee County Courthouse on Sunday as Darias Bowers speaks.

LIVE OAK, Fla. — As he prepared for Sunday’s "Unity Rally," Darias Bowers got a reminder of its importance.

Bowers said he was struggling to get water bottles to fit in a small refrigerator at his house to keep those at the rally hydrated.

Then the moment of clarity that tied into the rally hit home as he stood the water bottles up and was able to get the rest inside and the door to close.

“When we lay down and say nothing, we’re causing there to be room taken up so that other people can’t come in the door and sit at the table and have the same justices that we have,” said Bowers, who organized the peaceful rally against the violence against African Americans across the country, including the recent death of George Floyd in Minnesota that has sparked rallies and protests nationwide.

“So we have to stand up together, as a community, like we’re doing today, to continue to speak truth to power so that we can continue to have doors opened not just for our generation but for generations to come.”

The recent rash of black killings, from Ahmaud Arbery in Brunswick, Georgia, to Breonna Taylor in Louisville to Floyd moved Bowers to take that stand, to “speak a message of peace and to speak a message of unity.”

The message was delivered by a group of approximately 40 people — that drew support from Hamilton and Columbia counties in addition to Suwannee County — that marched from the parking lot at Langford Stadium to the Suwannee County Courthouse.

The message was also broadcast by the marchers as they chanted their desire for racism to end and that by standing united, they would not be defeated.

“We can’t say that all lives matter until black lives matter,” Bowers said to the group after they reached the courthouse steps, reminding them that they are instructed by the Bible to love their neighbors as themselves. 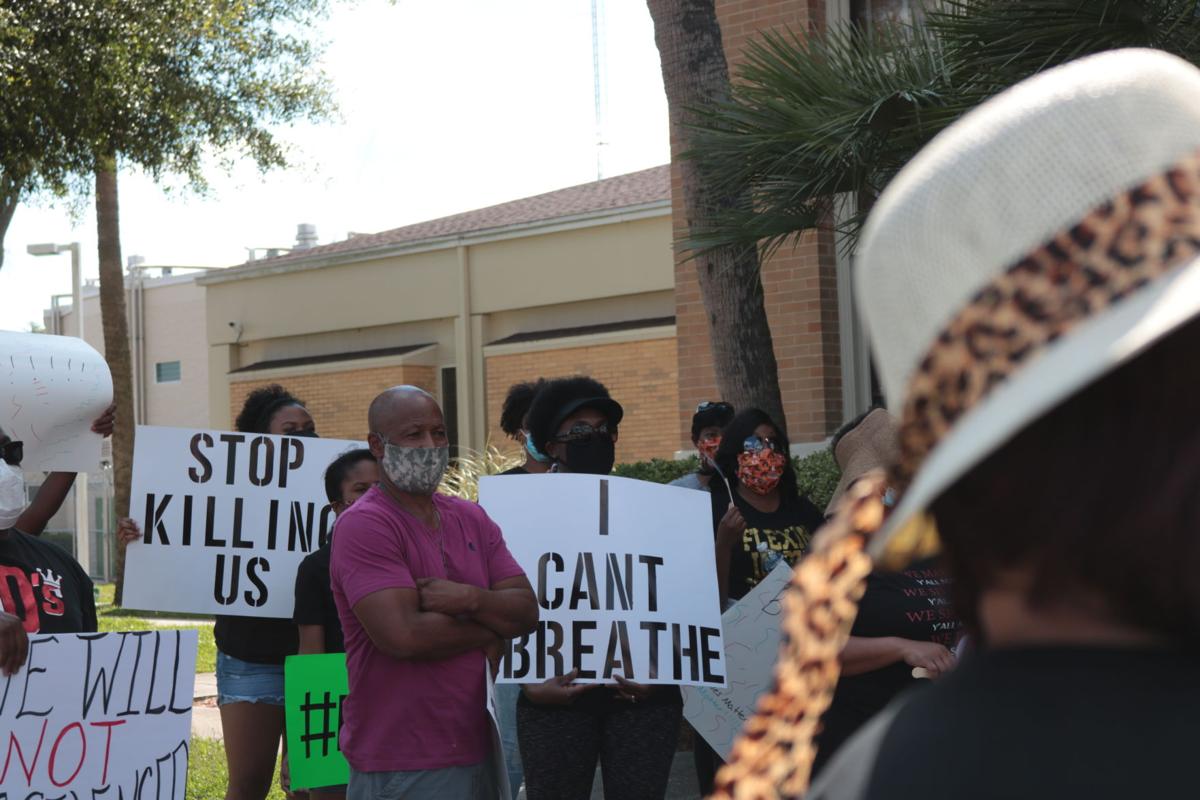 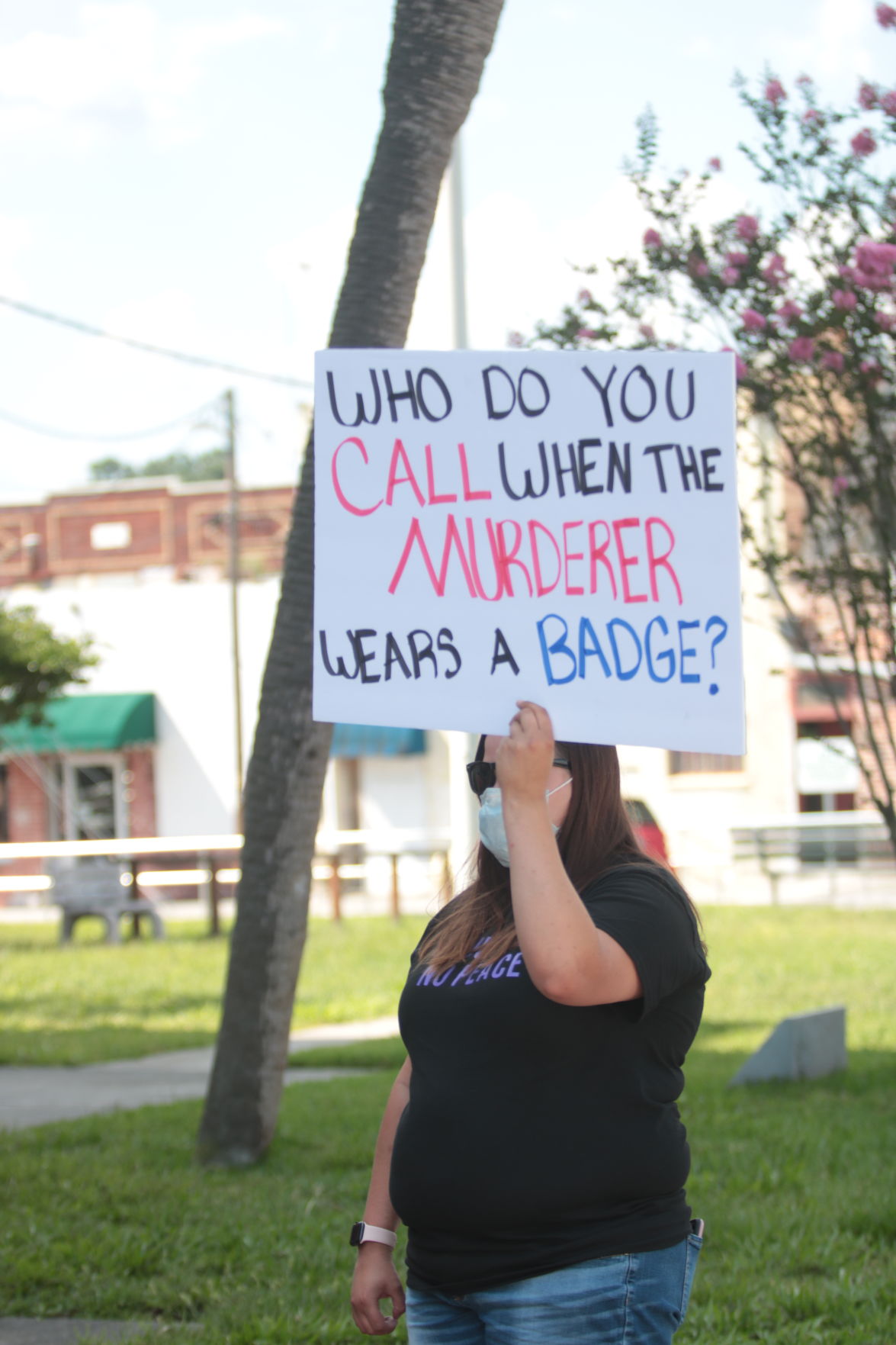 The Unity Rally was held to speak a 'peaceful message' in response to the violence acts against African Americans. 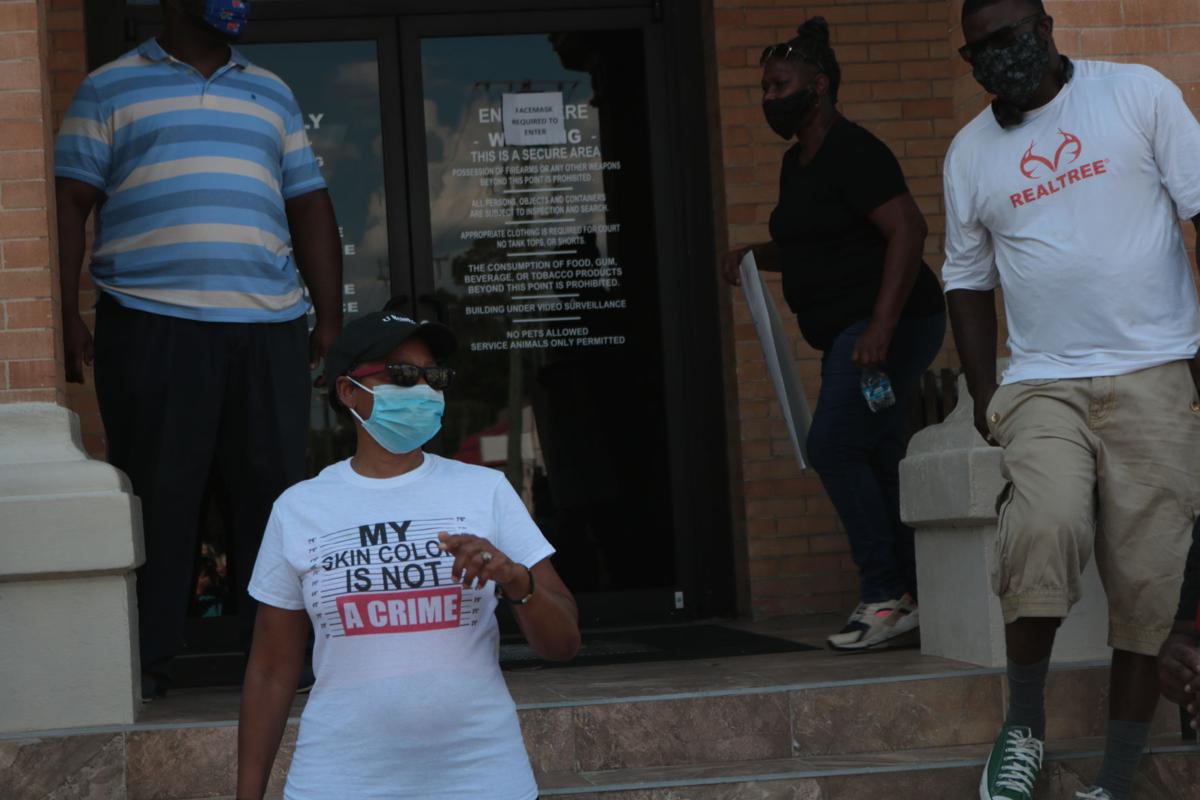 Anita Williams told those at the Unity Rally about the Tulsa Massacre that occurred 99 years ago. 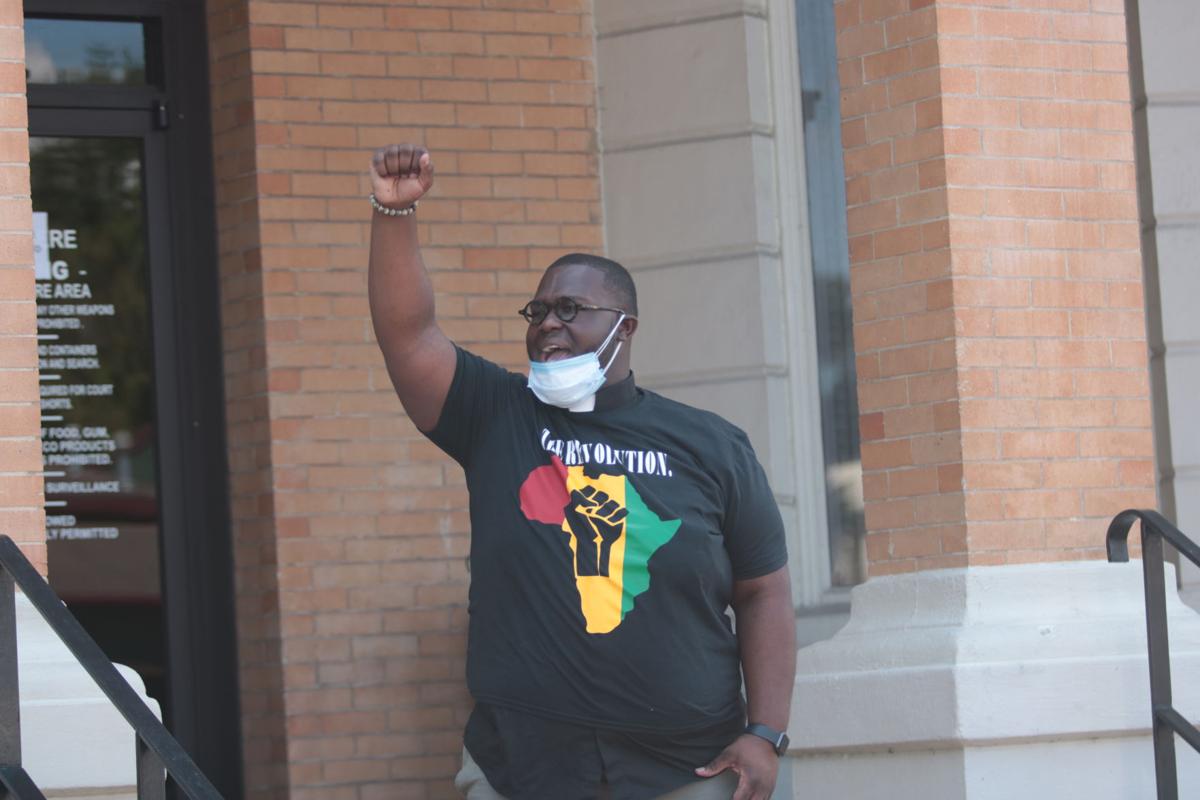 Darias Bowers said everybody should be aggrieved by the violence and hatred that still exists in America.

The Unity Rally was held to speak a 'peaceful message' in response to the violence acts against African Americans.

Anita Williams told those at the Unity Rally about the Tulsa Massacre that occurred 99 years ago.

Darias Bowers said everybody should be aggrieved by the violence and hatred that still exists in America.

Bowers also told the group that the recent deaths are nothing new and that the history of violence against blacks is a local story as well with 15-year-old Willie James Howard being lynched in Suwannee County in 1944.

Anita Williams added that 99 years ago to the day there was a massacre of black residents and businesses in the Greenwood neighborhood of Tulsa, Oklahoma, by mobs of whites.

“The only crime that those black people had committed was working hard, making money and being successful,” Williams said of the Tulsa Massacre.

To Lynda Brown Owens, there is an easy way for the blacks that gathered Sunday afternoon in Live Oak and those across the country to make their lives matter.

And that is to start voting. She said their voice and their power comes at the polls and they must start utilizing that power.

“Because no matter how many marches we make, how many riots we have, the only way we can make a change is by doing what?” Owens asked the group, getting a response of “Vote!

“When you don’t go vote, this is what you’re going to end up with. If we can stay united and go support ourselves by voting, hopefully we won’t have this again.”

Jamie Wachter is the editor of the Suwannee Democrat, Jasper News and Mayo Free Press.

MOULTRIE [mdash]J. Levon "Bob" Foster, 81, of Moultrie died Friday, July 3, 2020 at his home. A memorial service will be held at a later date. Cobb Funeral Chapel has been entrusted with arrangements.