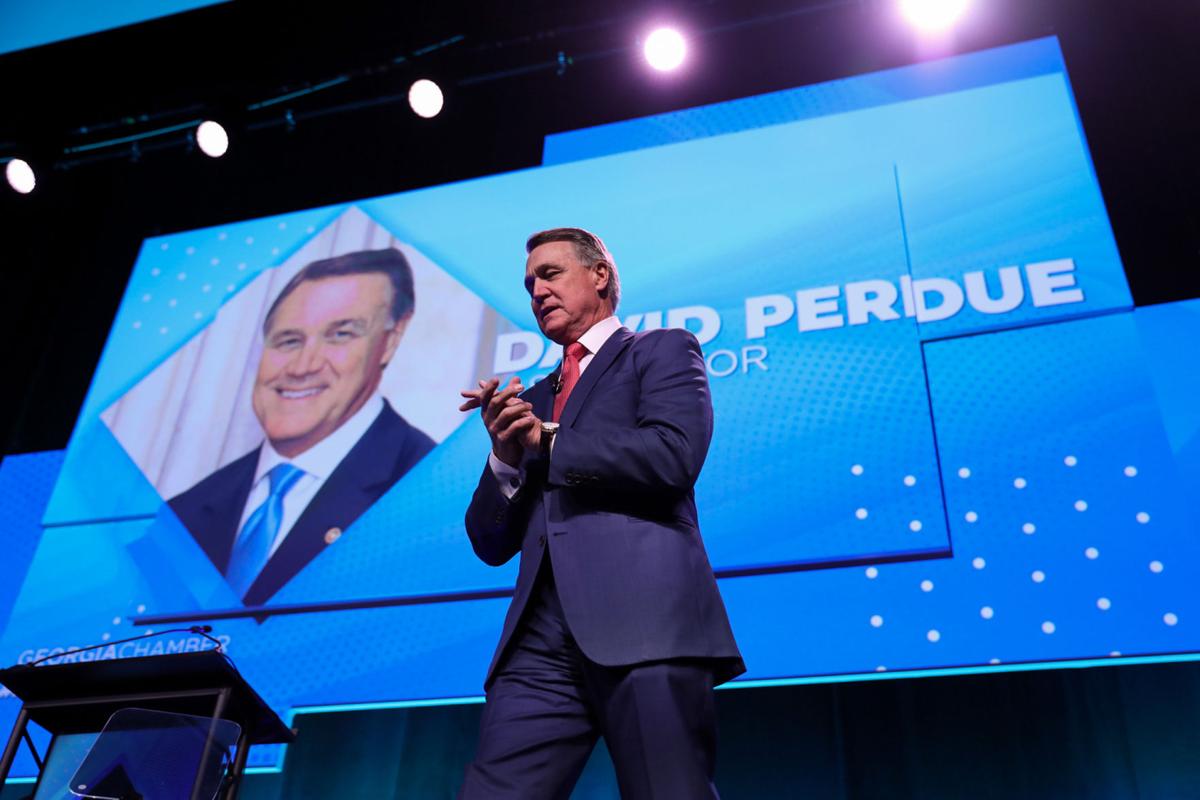 U.S. Sen. David Perdue speaks at the Georgia Chamber of Commerce Eggs and Issues events in Atlanta on Jan. 15.

ATLANTA — When U.S. Sen. David Perdue first ran for Congress in 2014, it was on a platform of being a “political outsider.”

Now, his 2020 campaign features a similar rebrand: “the original outsider.”

The Republican incumbent faces a well-known Democratic challenger but maintains that Republican leadership has put the U.S. in the best economic spot it has been for years.

"I first ran because Washington was broken. I'd said if we wanted different results, we had to send a different kind of person,” he said during a candidate interview with CNHI. “We've been getting those results for Georgia.”

Born in Macon, Perdue rose to become an influential figure in the private sector as a former Fortune 500 chief executive. In 2014, he won the election for U.S. Senate with no experience in public office — although his family has strong political ties. Perdue touts himself as one of the earliest supporters of Donald Trump’s presidential campaign in 2016.

Perdue has collected more than $11 million in contributions for his reelection bid and is reporting nearly $10.7 million cash on hand in the most recent campaign finance reports released this month.

"There are a group of people on the left in the Democratic party who believe in anarchy right now because they want that kind of radical change,” Perdue said. "They want to defund the police, they want to get rid of ICE, they want sanctuary cities to prevail, they don't want a controlled border.”

The contrast between Perdue and his Democratic opponent — Jon Ossoff — could not be more clear, he said.

But the November election changed drastically when the pandemic and then widespread social unrest upended the county. Now, the incumbent has found himself running on new policy issues from reopening schools safely to police reform.

Perdue said he supported “reasonable police reform” before a bill was introduced in the Senate. In his first round of general election ads, the senator highlighted his policy ideas but is adamantly against defunding law enforcement.

“Public safety needs to be maintained,” he said.

In response to the pandemic, Perdue has jumped on efforts to plan for reopening schools safely. His new legislation — which he said was inspired by his parents careers as school teachers — would create funds for schools to build reopening plans and purchase PPE and connects health care professionals to the education system to help develop safety protocols.

“There is a lot of angst about how do we reopen our schools,” he said. "I believe that the best decision for our children about reopening or curriculum or anything else is really made by the local teacher, the parents and the local administrators.”

Warnock: ’The Senate could use a pastor’

ATLANTA — A famed Atlanta pastor is considered a Democratic frontrunner for a Georgia seat in the U.S. Senate.

SYLVESTER [mdash]Mr. Earl Beanblossom, 79, of Sylvester, died on Tuesday, September 15, 2020, at his residence. The funeral service was held at 11:00 AM on Thursday, September 17, 2020 at Banks Funeral Home Chapel. The Rev. Bradley Floyd, Rev. Robert McCoy and Rev. Bobby Joe Brown will offic…

Sorry, there are no recent results for popular videos.