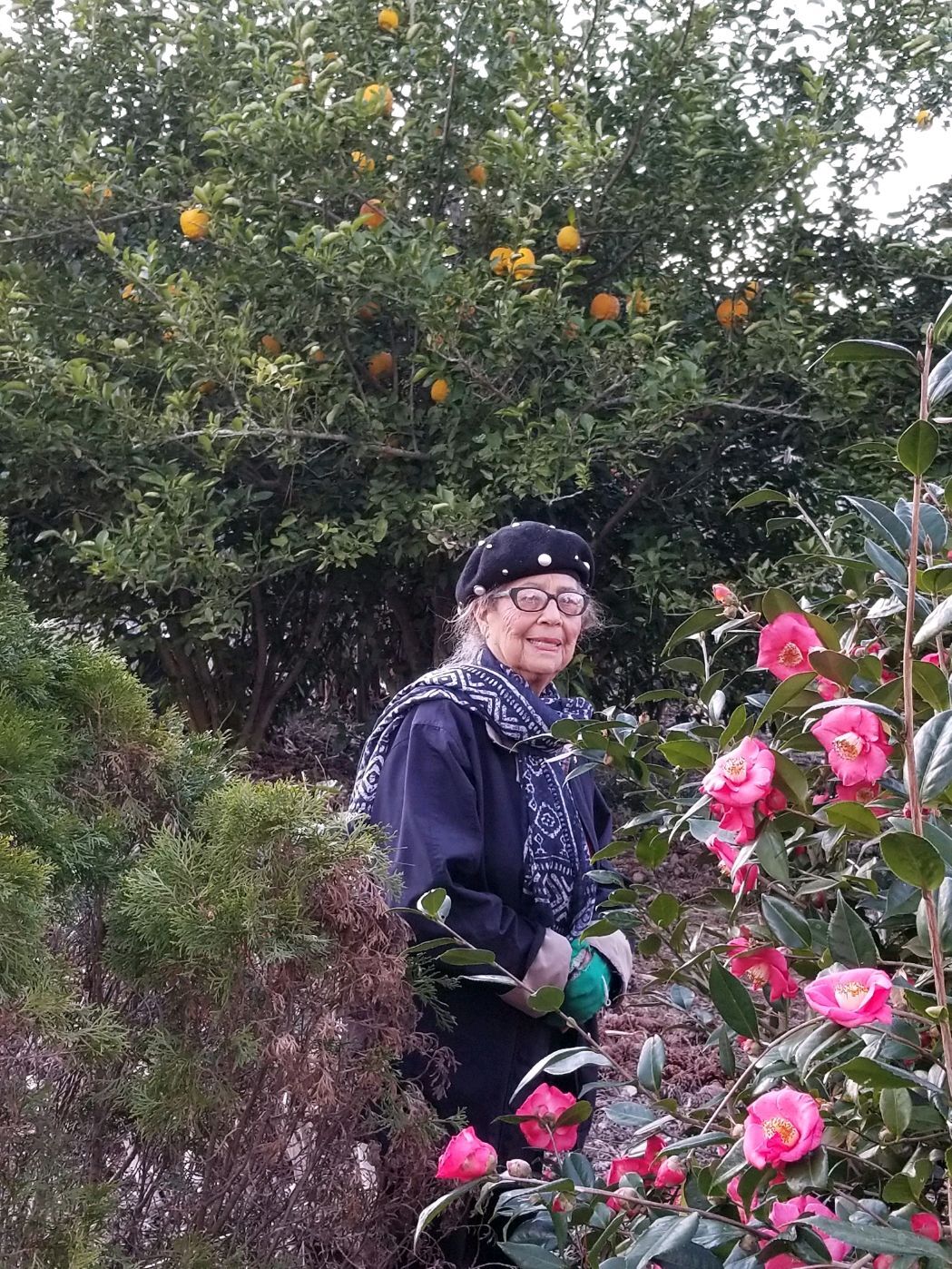 Besfanette Whitaker, a former home economics teacher, is known for her green thumb. 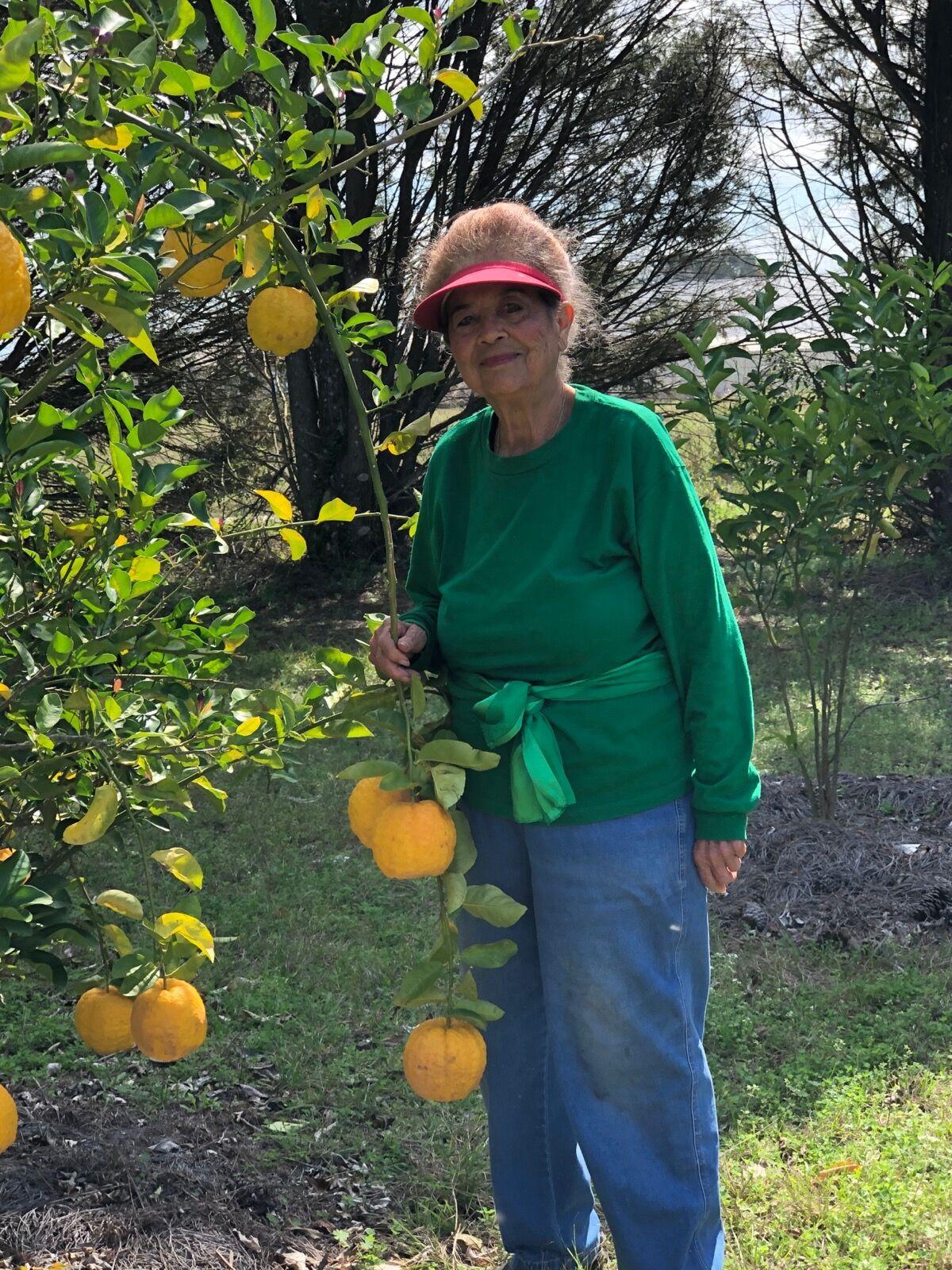 Besfanette Whitaker hopes part of her legacy will be a lemon tree in every yard in Colquitt County. She shares cuttings and seeds with all her friends.

Besfanette Whitaker, a former home economics teacher, is known for her green thumb.

Besfanette Whitaker hopes part of her legacy will be a lemon tree in every yard in Colquitt County. She shares cuttings and seeds with all her friends.

At age 95, Whitaker attributes her longevity to staying active; working daily in her garden; eating healthily; keeping a positive, happy mind; driving her car; watching football and tennis; fishing; and sharing her joys and knowledge with others while praising the Lord for His goodness.

Before the coronavirus hindered church attendance, one could see Whitaker actively using her God-given gifts at Mother Easter, the church reported.

“You could hear her in Sunday School leading the devotional songs,” the church said in a news release. “Her spirited singing uplifted all attendees. She also sings in the Chancel Choir and is one of the lead soloists. As a musically talented artist and pianist, Mrs. Whitaker praises the Lord each time she opens her mouth to sing or places her fingers on keys of the piano. In her early years of singing, she patterned her singing style to Ms. Lena Horne. She often said she learned every move and tried to sing every song that Ms. Horne sang.”

When Mother Easter moved to its new location on West Central Avenue in 1985, the circles of the Missionary Society were reorganized. As the former president, treasurer and teacher in the Evelyn Kendrick Missionary Circle, Whitaker taught lively lessons from an assortment of Missionary literatures.

"When you teach, put some life into anything you do so that your audience will pay attention to what you are saying or doing! No one will listen to a dull presentation. I'm an enjoyable and energetic person who puts spunk into everything that I do," Whitaker said.

Whitaker often created plays or skits from the lessons that were taught. She wanted all members of the audience to understand their purposes. She often composed original songs to go along with the lessons as well. Even at the tender age of 95, she continues to teach.

Before visitors were banned from attending nursing homes because of the virus, for many years Whitaker and the Evelyn Kendrick Circle shared their musical gifts of singing with the residents of several nursing homes, Mother Easter Baptist said.

“Mrs. Whitaker would be in her element as she sang with joy while engaging everyone to join in,” the church’s press release said. “She would definitely have the residents patting their feet and clapping their hands as she sang to the glory of God while serving mankind. She sang from a heart of gratitude for the grace that she was given. It was the least she could do. (Romans 12:1)

“1 Peter 4:10 states, ‘Each of you should use whatever gift you have received to serve others, as faithful stewards of God's grace in its various forms. If anyone speaks, they should do so as one who speaks the very words of God. If anyone serves, they should do so with the strength God provides, so that in all things God may be praised through Jesus Christ. To him be the glory and the power forever and ever. Amen.’”

One of the main things that keeps Whitaker active is her enormous garden. She has an extensive knowledge of flowers and fruit bearing trees. In her garden, many varieties of fruit (citrus, figs, pears, grapes, and persimmons), vegetables and pecan trees thrive. She will tell you the variety of each plant.

"Now I want you to remember to cut, trim or move your plants during the first weeks of February,” she said. “Now don't you forget it! Remember, one of the easiest ways to grow a lemon tree is to find a sunny location, place mulch in the bottom of the hole, water next, then place a decaying piece of fruit or just the seeds in the hole. Make sure to spread the seeds out before you cover them up with soiL Once the seeds grow to a certain height, dig them up. Then, take a Styrofoam cup and write what the plant is on the outside of the cup. Then, place a little soil and the plant in the cup and give it to a friend. If you want to grow seeds in a flower pot, make sure you place a label of what's in the pot because you won't know what the plant is until it starts to bear fruit. Then, share your plants and joys with friends.”

As a teacher, she repeats details often so her listeners don't forget her lessons.

Whitaker has a knack for growing flowers as well. While walking through her garden, she often breaks off a branch of a plant, places it in the soil near the side of her home or a shelter where rain water runs off the roof. She says, "If it grows, I'll give it to someone. If not, I'll pull it up and place something else there."

Whitaker hopes her legacy will include a lemon tree planted in her honor in every yard in Colquitt County, the church said. She continues to share seedlings with all who visit her and asks her circle members and many friends who have received a lemon tree or a flower cutting from her to do the same.

When it's harvesting time, Whitaker and her son, Charles, make many, many trips to the local Food Bank to share the fruit that God has given her to share with mankind. She says, "That's my duty as a Christian. I must show love by giving, teaching and sharing."

As a professional Family & Consumer Science (home economics) teacher, Whitaker received a Bachelor of Science degree from Alabama A & M in Huntsville, Alabama. She gleefully shares her knowledge of food preparation, testing various recipes from the many foods she grows, and what she has figured out. She often calls many friends and says, "Guess what I learned how to do today?" Her details are shared so that others will learn, also.

“Mrs. Besfanette Whitaker has been given many gifts, and God desires her to use what He has given her to further His kingdom and proclaim His glory,” the church release said. “It's what she was created to do. ‘ ... Freely you have received; freely give.’ (Matthew 10:8)

“Mother Easter is proud to honor this jewel of a humanitarian. As the eldest member of our church, she has shared God's gifts with His people. I hope He is well pleased with Mrs. Besfanette Whitaker.”