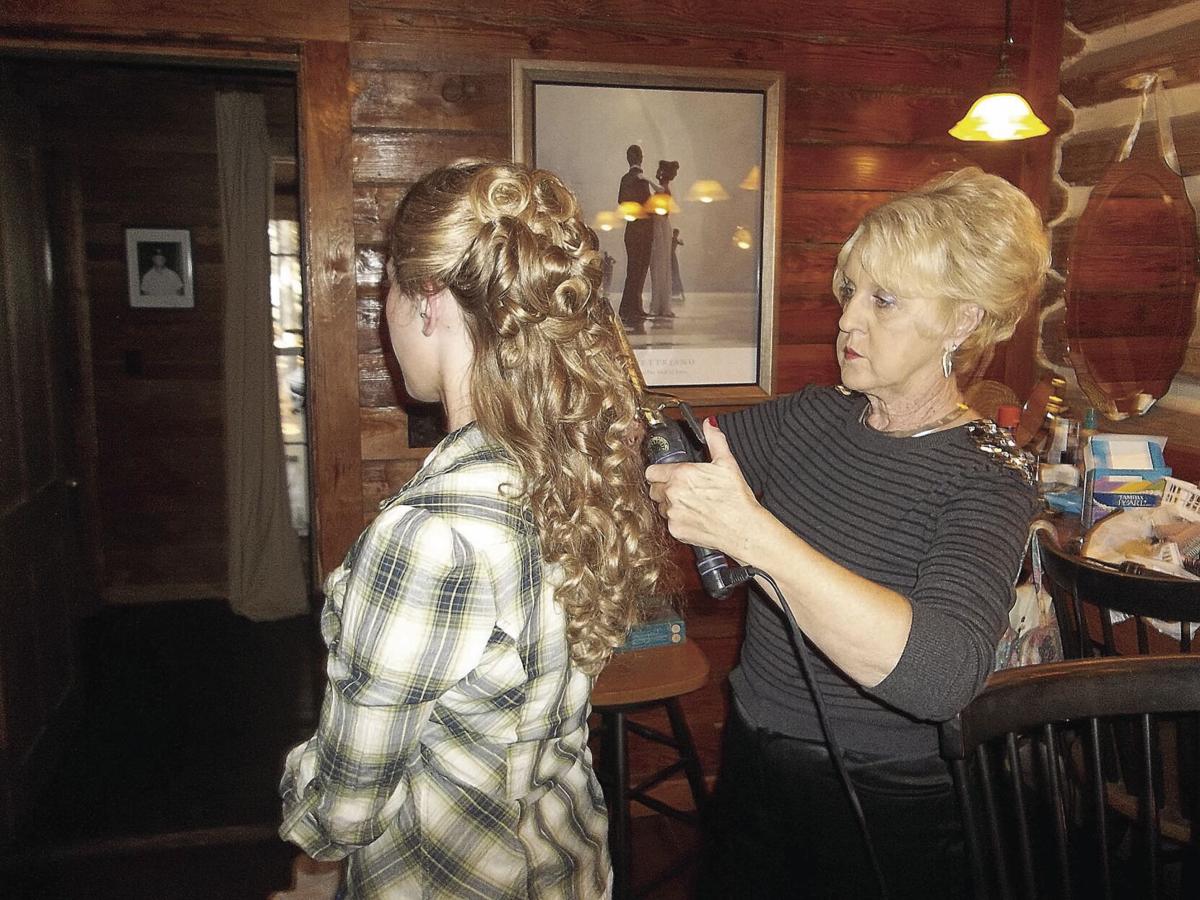 Barbara Allegood adds curl to a client’s hair, one of the last clients she saw before closing Barbara’s Cosmetique last month. The beauty shop closed Dec. 20 after 48 years. 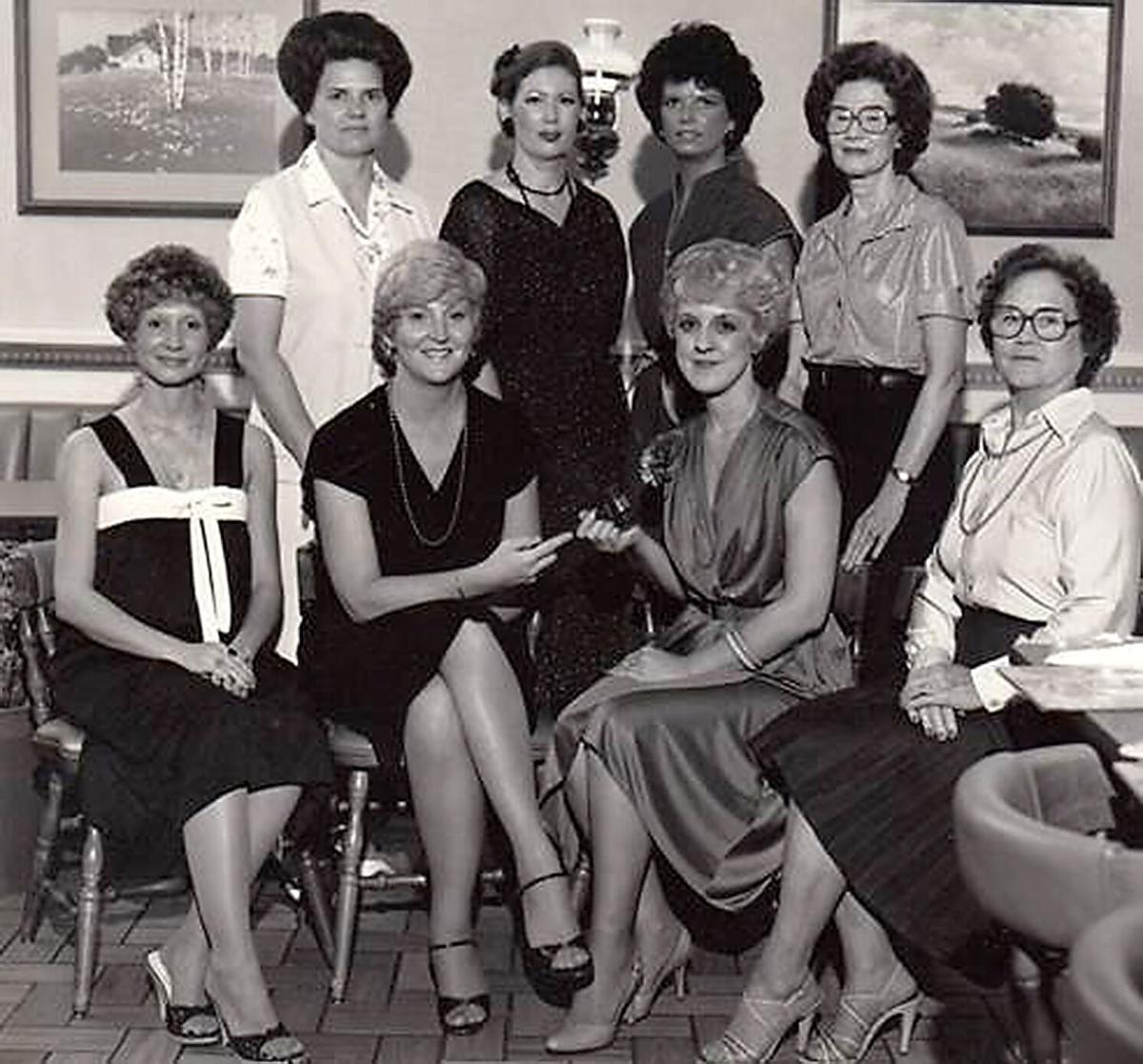 Barbara Corbett (now Allegood), seated right, was installed to her second term as president of the Moultrie Hairdressers Association by Jeanette Bennett Register, seated left, in this undated photo provided by Allegood’s family. Both women are natives of Cook County. The installation service was held at Shoney’s in Moultrie. The hairdressers’ association was organized to promote greater interest in the profession and fellowship among the hairdressers of the area. The organization is also active in civic work in Moultrie, contributing to the Heart Fund, fine arts, and nursing homes in Colquitt County.

Barbara Allegood adds curl to a client’s hair, one of the last clients she saw before closing Barbara’s Cosmetique last month. The beauty shop closed Dec. 20 after 48 years.

Barbara Corbett (now Allegood), seated right, was installed to her second term as president of the Moultrie Hairdressers Association by Jeanette Bennett Register, seated left, in this undated photo provided by Allegood’s family. Both women are natives of Cook County. The installation service was held at Shoney’s in Moultrie. The hairdressers’ association was organized to promote greater interest in the profession and fellowship among the hairdressers of the area. The organization is also active in civic work in Moultrie, contributing to the Heart Fund, fine arts, and nursing homes in Colquitt County.

MOULTRIE, Ga. – It would be hard to adjust to the idea of “relaxing” every day when your first job was at the age of 12 more than six decades ago.

Barbara Allegood never used the word “retirement” when discussing how her life changed as a result of the COVID-19 pandemic of 2020. She sadly admitted that it brought an end to her career as a hairdresser, more so than the tremors she experiences in her left arm. And so, on Dec. 23, Barbara’s Cosmetique saw its final clients at its South Main Street location, the seventh location for the business that began on Rowland Drive in 1972.

In January, Allegood will relocate from her West Boulevard home to Tallahassee, Fla., with her only son, Steve Corbett. That will be another adjustment, being the one being taken care of when it’s always been her mission to see to the needs of others. She was one to take her Cosmetique skills beyond the salon, going to Cobblestone two mornings a week for 10 years.

There, too, was a chore taken away by COVID-19. Twelve of her faithful clients passed on since March, but not all to the coronavirus.

“It killed my business,” said Allegood, a native of Adel who rode into Moultrie at the age of 15 to play and sing with a band. “With the tremor getting worse, there’s no cure for it. I haven’t been able to find medicine that would help me with it effectively. I could have continued working if it wasn’t for my tremor.”

She’s not expecting any parades through the city, though. Impacting other lives was just her Christian duty. Through the Moultrie Hairdressers Association, Allegood helped host fashion shows to raise funds for such causes as the Heart Fund.

“I worked at the dime store in Adel,” said Allegood about that first job before she became a teenager. One of her tasks was preparing Easter baskets, and she only went to the store on Saturdays arriving at 8 a.m. sharp. She would go home with “two dollars and a quarter.”

“I bought my school clothes,” said Allegood. “Put them on layaway at B.C. Moore’s.”

Sixty-five years later, Barbara Allegood got up early for a working day one final time. Two days before that, she celebrated her 77th birthday. Equipment she sold was moved out of the shop the Tuesday after Christmas.

“I did four clients,” said Allegood. “I did two colors and a perm and a blow dry. The other two girls who worked with me, one of them was with me 31 years. She moved to Florida. The other is going to work at a salon downtown. She’s been in the business 62 years.”

Allegood identified her as Jean Gay, an artist and leader of the DAR. They worked together for the past seven years.

“I’ve had over 100 employees,” she said. “I tell them when I can’t sleep at night I count the names, and I can still remember so many names.”

And locations. She said the building on Rowland Drive – site of her original location – still stands today. After seven years, she made the first of multiple moves. She was at Moultrie Plaza for seven to eight years and at Sunset Plaza by Belk’s.

“I had a stylist who was killed in a car wreck that had been with me for over 20 years,” said Allegood. “Her clients quit coming because they said it reminded them of her. We moved then to where Winn-Dixie was on Talmadge Drive, then we moved to South Main Street for a bit.”

She also had a small salon on Fifth Avenue. This was a time when her helpers started branching out on their own. It was a two-person operation until Gay joined them.

“I used to do 30 people’s hair a day,” said Allegood. “At Easter we’d be so busy. I had such a good clientele. I ended up with three that stayed with me, still alive, and came to me last week for the last time. For 48 years they have been there faithful every week. I would have clients that came once a month. I had a lot of male clients I did haircuts on. All of my clients were like family to me.”

For 48 years, she literally saw families bring in the next generation of clients.

“I love children,” said Allegood. She learned through social media of one young client who was diagnosed with cancer in her foot. The girl’s recovered and getting her hair back. That brings up another of Allegood’s extra missions, creating style wigs for cancer patients.

“They would be so happy,” she said about providing a style that closely matched what they had prior to treatments that took away their hair.

Barbara Allegood grew up one of seven children, and all shared musical talent. She has a brother who played guitar at the Grand Ole Opry and traveled with Dottie West. Her nephews Greg and Chuck Day wrote the southern gospel song “The Midnight Cry” in 1986.

“They didn’t realize what a song it was going to be,” said Allegood. “It’s sung by large choirs. They are very musically talented.”

Allegood’s first job in Moultrie was at Woody’s Restaurant, and she played in a rock ’n roll band as a stand-up Jerry Lee Lewis-style piano player.

“Music is healing in a lot of ways,” she said. “I like to listen to praise and worship music.

“I still love music, but I don’t sing anymore.”

It was the band that brought Allegood – and her $2.50 fortune – from Adel to Moultrie and found her a rooming house run by a lady whose children had gone to college. There were two tenants there, the other working at Watson’s Drug Store (now Griner’s Jewelry). She worked and played music until getting married for the first time in 1960. Steve Corbett was born a year later.

“The Lord blessed me with him,” said Allegood. “He’s been a joy. He sees all that I’ve done, but I don’t like to take … what I did I did from my heart. It hurt me when people don’t have what they need.

“I’ve been hungry many a time. It breaks my heart when I see people in need when we are such a land of plenty. There’s no excuse.”

In 1965, Allegood started beauty school, a private cosmetology school downtown with only the basics, nothing like Southern Regional Technical College. It took nine months and 1,500 hours to complete. She was the employee for six years before establishing her Cosmetique.

“I had three sisters who were hairstylists,” said Allegood. “I had a picture of when I was little where I cut my bangs. I would go under the house with scissors and cut my hair. I just loved hair and make-up. I was wearing high heels at a very early age.

“Also, the accomplishment of when you cut or style or color somebody’s hair and make them feel good about themselves, that’s worth it.”

And the fellowship. Allegood tries to listen to what her clients have to say and minister the best she can. She said she’s done a good bit of praying in her salon, especially in private.

Allegood helped provide hairstyling services in funeral homes, even when she was sick with the flu the first time she received a call from Cobb Funeral Home.

“That’s the last thing I could do for that person that had been coming to the salon and supporting me,” she said.

Aside from the nerve damage causing her tremors, Barbara Allegood feels fine. She wants to do something worthwhile every day and not focus on what’s brought her career to an end. She knows others are still struggling, seeking an end to the pandemic. She’s seen both her parents and an older sister die from cancer, and took care of her mother for eight years.

“She was a research patient for Duke University for immunotherapy, which they are using now for melanoma,” said Allegood. “I carried her there for two years once a month. They would take her white blood cells out, and at the end of the week give her a booster shot with that immunotherapy medicine. She lived 20-something years well by being a research patient.

“Now I look back and think I don’t know how I drove 12 hours to Durham, N.C. Had to be the Lord leading me there. You didn’t have GPS. You just had a road map.”

Another sister she helped financially died from Alzheimer’s.

“You have to accept what’s there and make the best of it,” she said.

Carolyn Lucene Owens Glass, 90, of Moultrie, passed away on Saturday, January 16, 2021 at Colquitt Regional Medical Center. A graveside service will be held at 11:00AM on Wednesday, January 20, 2021 at Pinecrest Memory Gardens with Rev. Randall Kennedy officiating. Born on September 27, 1930…