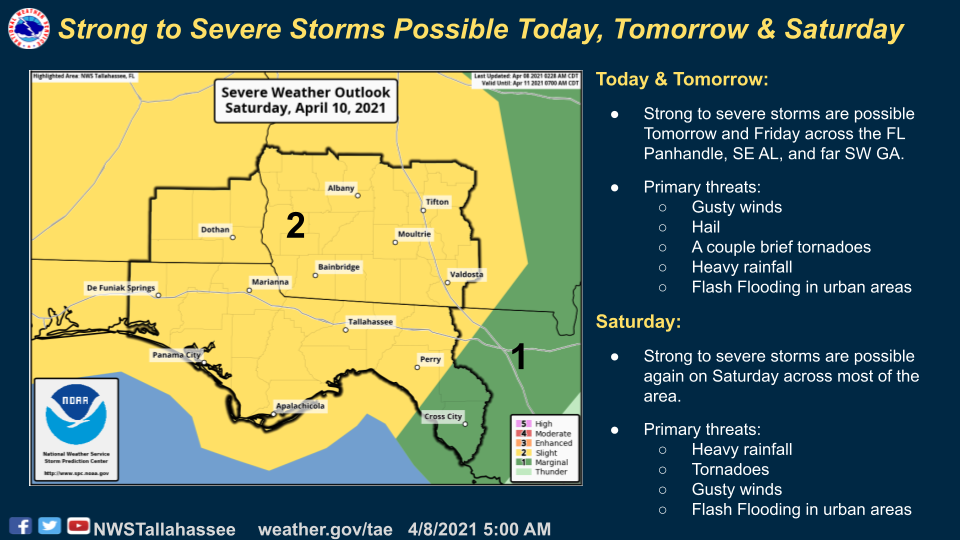 On Saturday, the National Weather Service predicts a slight risk of severe weather, including heavy rain and damaging winds, throughout much of South Georgia. 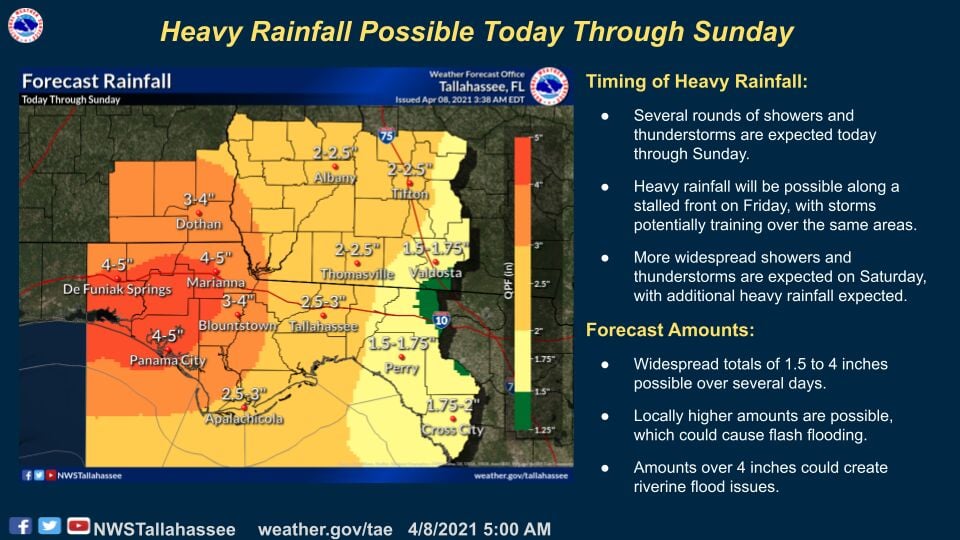 Several rounds of storms are expected to add up to 2 to 2.5 inches of rain across most of Southwest Georgia.

On Saturday, the National Weather Service predicts a slight risk of severe weather, including heavy rain and damaging winds, throughout much of South Georgia.

Several rounds of storms are expected to add up to 2 to 2.5 inches of rain across most of Southwest Georgia.

MOULTRIE, Ga. — Meteorologists are warning of possibly severe weather through this weekend.

Storms in Louisiana flooded several streets in New Orleans early this morning, according to a report from the Associated Press. Several roads were impassible after 3 to 5 inches of rain fell in a short time, emergency management officials said.

The same system may produce severe storms Friday from Texas and Oklahoma to the Carolinas, forecasters told the AP.

Parts of Louisiana, Arkansas, Mississippi and Alabama will be at the highest risk of severe storms on Friday, the national Storm Prediction Center is projecting.

The National Weather Service’s Tallahassee office said the potential for severe weather will include Southwest Georgia by Saturday. The Tallahassee office’s coverage area extends into southern Alabama but also includes most of South Georgia, including Colquitt County.

“Showers and thunderstorms will begin to move in from the west today as a cold front approaches the area,” the NWS offices said this morning. “This front will stall out over the area tonight and will eventually become the focus for another round of showers and thunderstorms tomorrow. Both today and tomorrow have a marginal risk for severe weather.”

The weather service predicted a 70% chance of thunderstorms here on Friday, but pockets of heavy rainfall will be possible and much of the Tallahassee office’s coverage area has a marginal risk for excessive rainfall.

“On Saturday, a second, stronger frontal system approaches bringing more widespread showers and thunderstorms to the area,” the NWS said. “Severe weather will be possible again on Saturday with most of the area in a slight risk …”

Marginal risk is the lowest level of enhanced risk on the Weather Service’s scale. Slight risk is the next level up.

The chance of thunderstorms will start small on Saturday but rise to 90% by Saturday afternoon, the NWS said. Rain chances decline somewhat through the night..

“With increasing wind shear, tornadoes and heavy rainfall will be the primary hazards on Saturday, and any heavy rainfall received on Friday could lead to higher sensitivity to rainfall on Saturday,” the NWS said. “Widespread rainfall totals for the multi-day event are forecast in the 2 to 5 inch range, with isolated higher amounts possible. Amounts over 4 inches have the potential to cause riverine flooding issues, and flash flooding will be a concern especially on Saturday.”

HAHIRA [mdash] Michael Brandon Lodge, 35 of Moultrie passed away Saturday, June 12, 2021 at his residence. Mr. Lodge was born June 3, 1986 in Albany, Ga. Survivors include his parents, Gary and Carolyn Lodge of Moultrie; brother, Jonathan (Shayla) Lodge of Richmond Hill; and one niece, Rylei…

SYLVESTER, GA - Claudine McCrary Howell, 87, of Doerun, passed away Tuesday, June 15, 2021, at her residence. Cobb Funeral Chapel has been entrusted with arrangements. Please sign the online guestbook at www.cobbfuneralchapel.com.