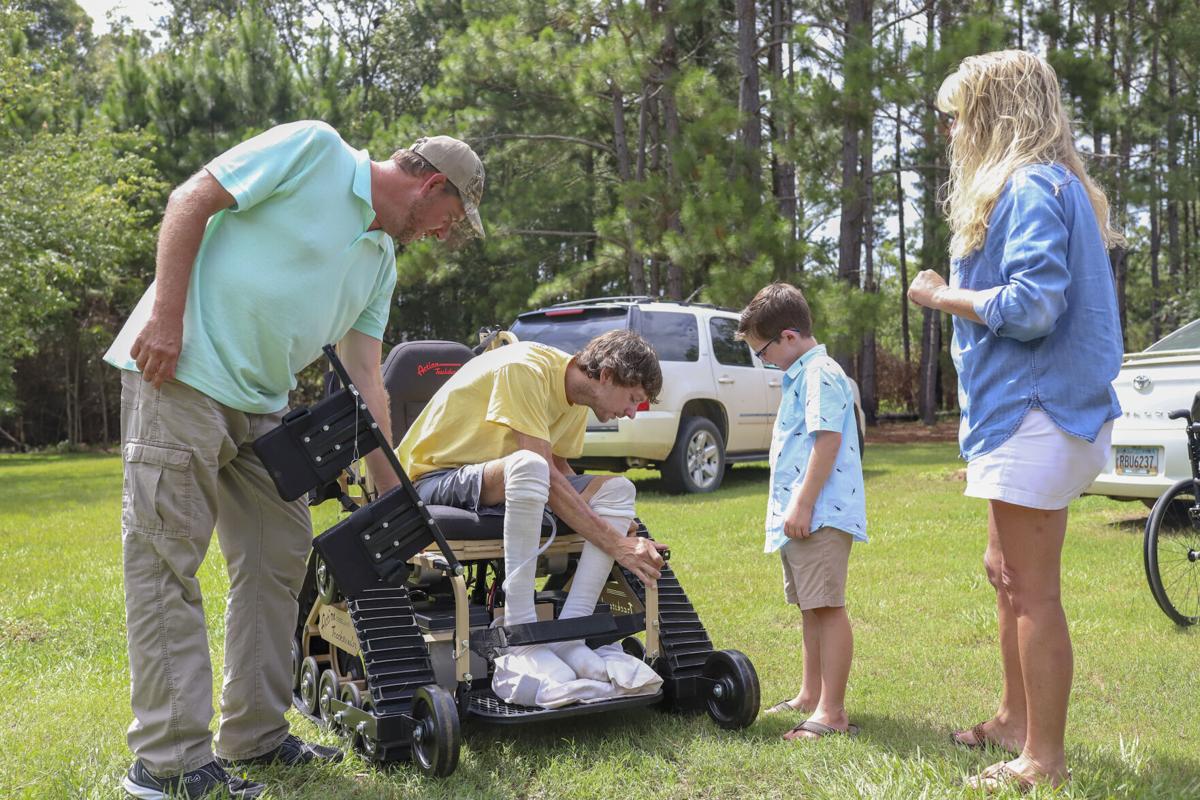 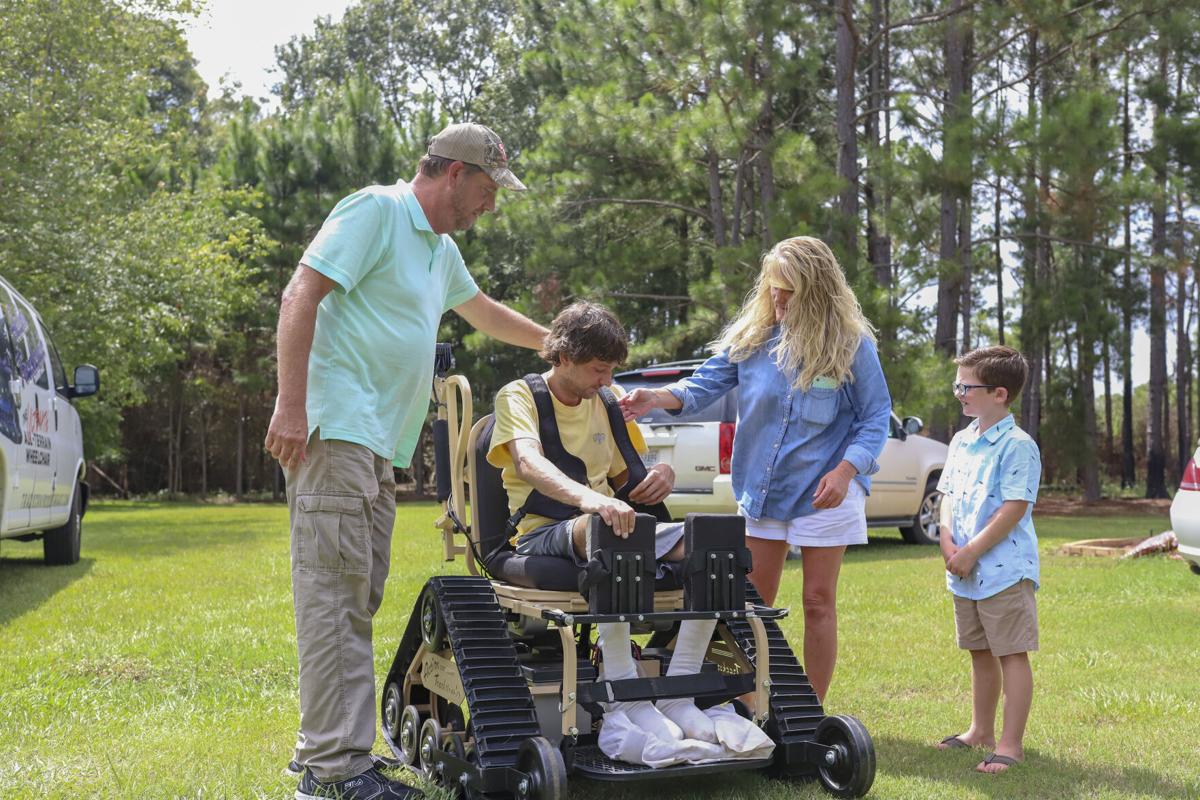 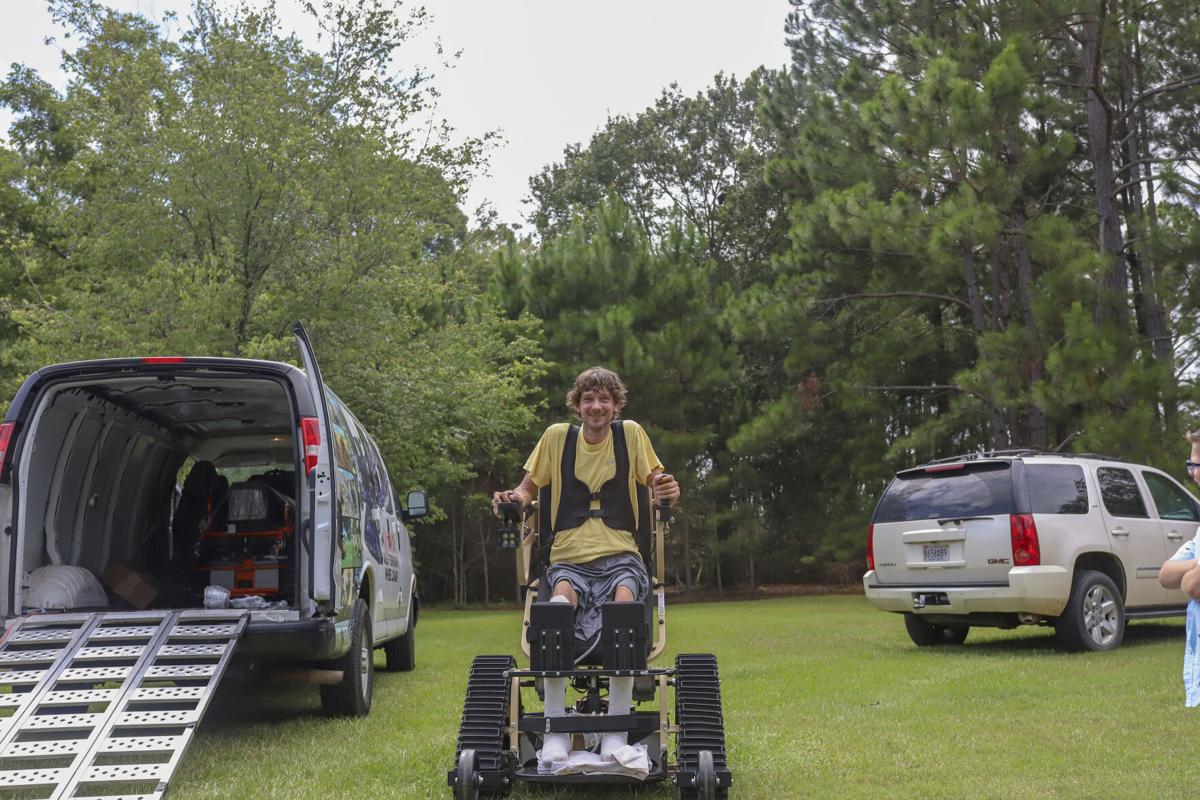 Garrett Poppell raises himself as near to standing as he can with the Action Trackchair. Except for some physical therapy after his accident, Garrett has not used his leg muscles in more than three years. He hopes the chair will help him come fully upright and eventually help him learn to walk again. 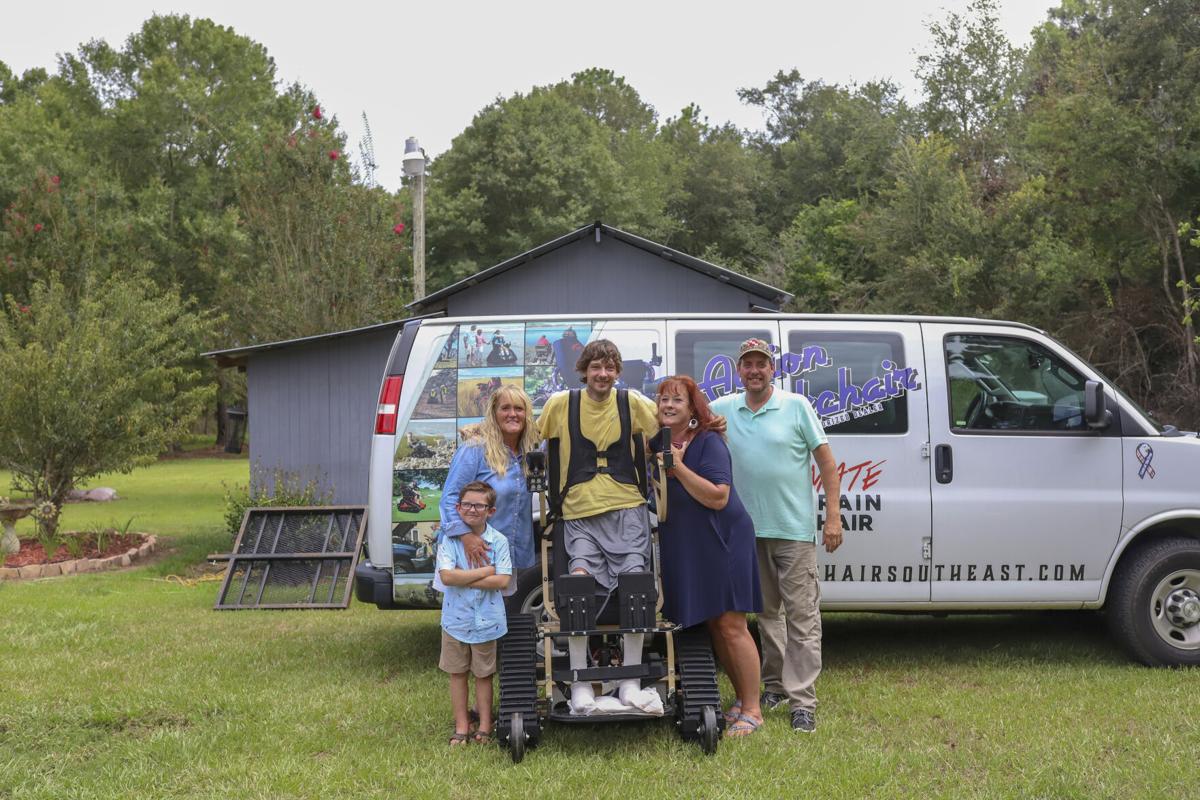 Garrett Poppell was joined by Bridget Dell and her son Benton, left, by his mother Kathy Poppell, and by Philip Shadle of Georgia Action Mobility Equipment for a photograph. 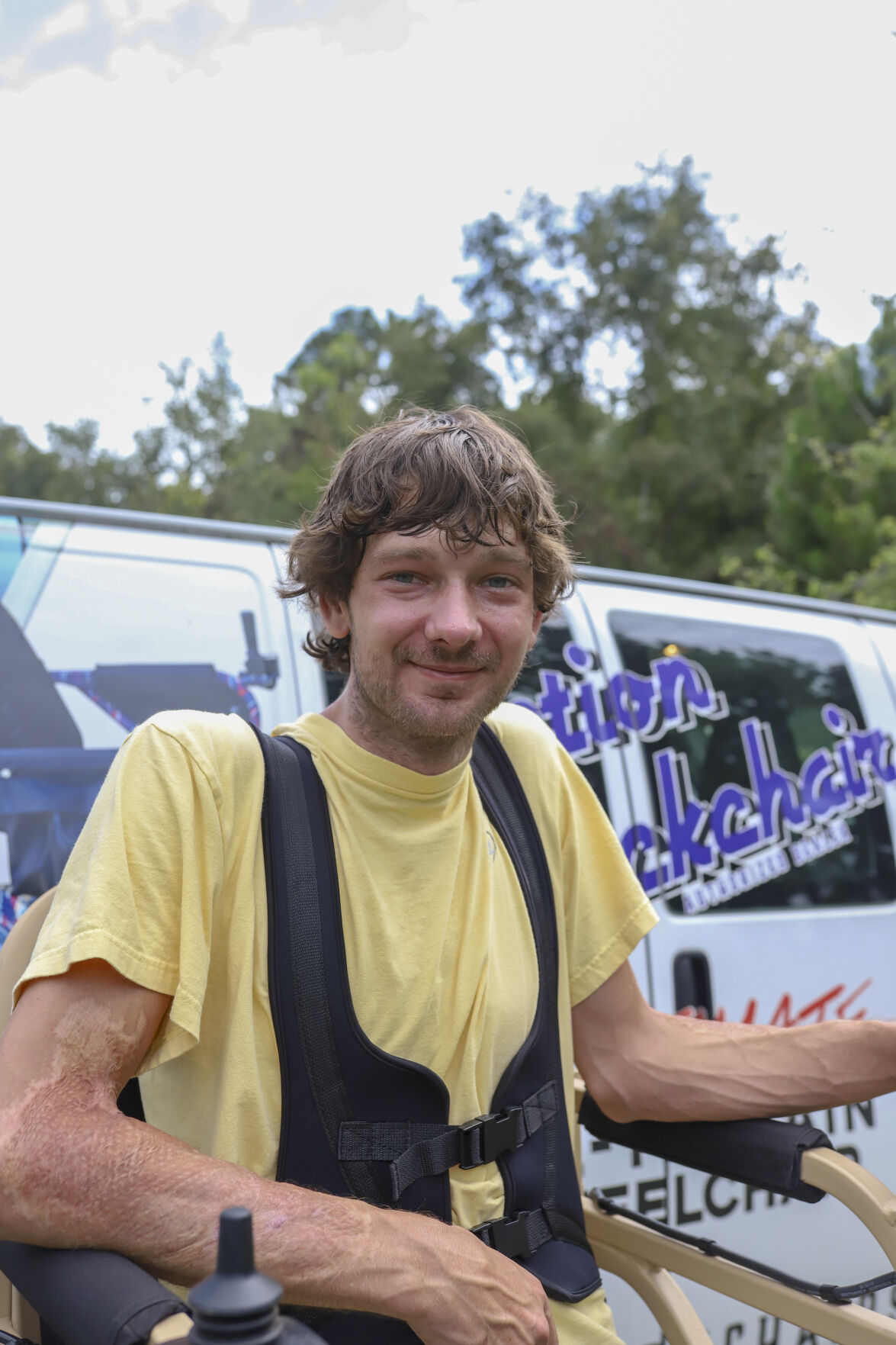 Garrett Poppell is all smiles with his new Action Trackchair. 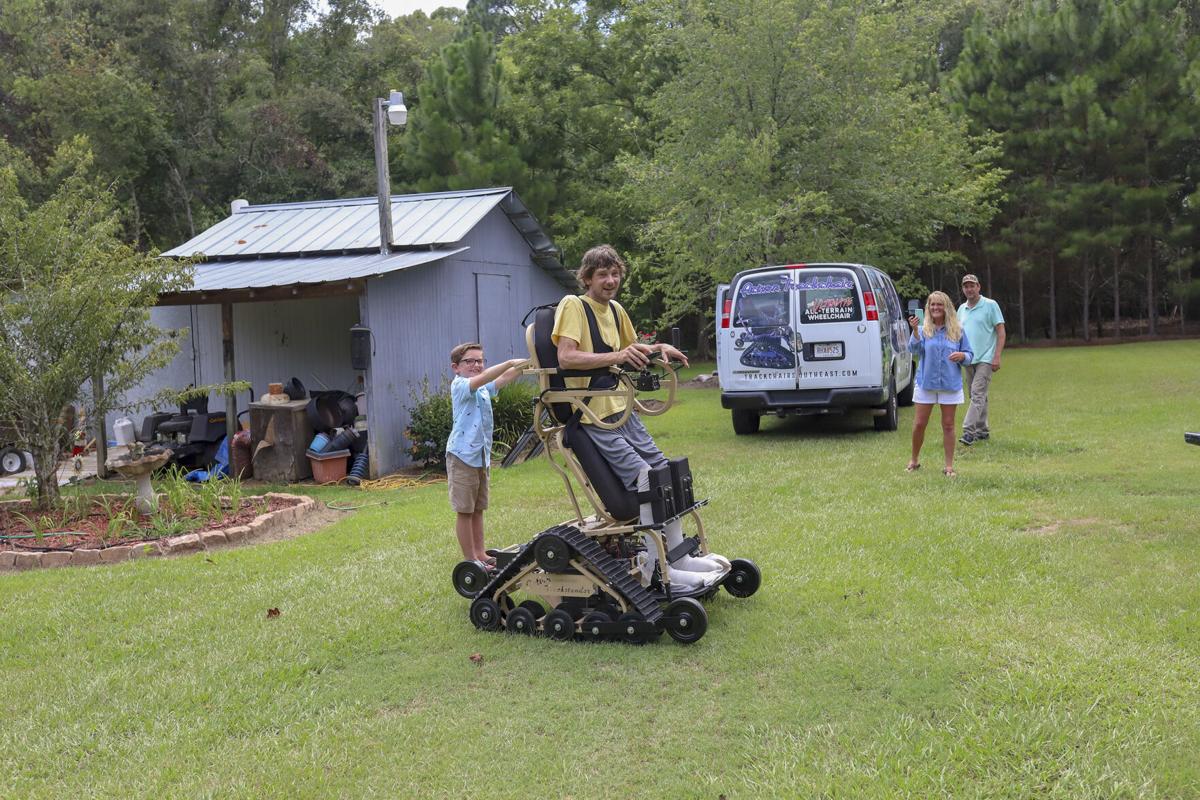 Garrett Poppell gives Benton Dell a ride on his trackchair as Benton's mother, Bridget Dell and Philip Shadle, whose company provided the chair, look on.

Garrett Poppell raises himself as near to standing as he can with the Action Trackchair. Except for some physical therapy after his accident, Garrett has not used his leg muscles in more than three years. He hopes the chair will help him come fully upright and eventually help him learn to walk again.

Garrett Poppell was joined by Bridget Dell and her son Benton, left, by his mother Kathy Poppell, and by Philip Shadle of Georgia Action Mobility Equipment for a photograph.

Garrett Poppell is all smiles with his new Action Trackchair.

Garrett Poppell gives Benton Dell a ride on his trackchair as Benton's mother, Bridget Dell and Philip Shadle, whose company provided the chair, look on.

It’s the closest he’s come since a wreck in 2017 left him paralyzed from the chest down.

“Oh, that’s tight,” he said as leg muscles he hasn’t been able to use in three years stretched. His knees wouldn't quite come straight.

Garrett and his family refrained from the word “miracle” on Wednesday as he enjoyed the gift of an Action Trackchair. One of the benefits of this model is the seat will elevate, pushing him into a standing position while holding him securely in place. On Wednesday, his muscles were too tight to let him come fully erect, but with work, that will come.

He hopes it offers the possibility of being able to walk again.

On April 2, 2017, Garrett, who was then 24 years old, crashed his truck near his home on Millpond Road. He crawled out the passenger’s window of his burning pickup. He remembers the sound of the air ambulance landing to fly him to a hospital. The next thing he remembers is waking from a medically induced coma five weeks later.

Kathy said Garrett stayed at Shands Hospital in Gainesville, Fla., for four months. He suffered serious burns to his arms and legs, a bruised heart, bleeding on the brain, a crushed sternum and a spinal injury. He’s had 11 surgeries including seven skin grafts.

After that, she said, he spent two months at the Shepherd Center in Atlanta, which specializes in brain and spinal injuries.

The pain was agonizing. The burns took time to heal. Garrett basically spent the first two years after the accident in bed, she said.

Since then, Garrett has learned to drive with modifications. He tends a garden in a planter donated by Larry Richardson, the owner of Freckles Skate Center. In a wheelchair, he’s able to cross his yard until he gets to the creek that cuts the property in two.

Sometimes he struggled with the standard wheelchair just to get across the yard. He said it fishtails in the grass.

He and his mother researched trackchairs on the internet. They’re like electric wheelchairs, except instead of wheels, they have rubber tracks like a bulldozer. At more than $10,000 for the cheaper models, there was no way they could afford one — but Garrett thought he could make one. He put out a call on Facebook for anyone who knew where he could get rubber tracks.

When Garrett had his accident, his cellphone was destroyed. Then he spent more than a month in a coma. By the time his mother could get him a new phone and he could check Facebook, he had 450 friend requests. The story of his accident had reached across the country.

Maybe that’s how he became acquainted with Bridget Dell, an Alabama woman who was moved by his posts about what he was experiencing. Truth is, neither of them really remembers how they became Facebook friends.

When Dell saw his post about wanting to build a trackchair, she decided to hold a fundraiser to help him buy one.

“I’ve never done a fundraiser,” Dell said, “except my kids’ school — and we’re not very good at that. We never won any prizes.”

But Dell was positive. She expected to raise enough for the chair in about two weeks. Then along came the coronavirus.

In spite of everything related to the virus, Dell hit her mark. It just took longer, about four months.

The model of trackchair that Dell bought for Garrett costs about $27,000. She won’t say how much she raised, but it was enough.

“A lot of people love Garrett and Kathy,” she said, “so it wasn’t too hard.”

Her children, 12-year-old Kinley and 8-year-old Benton went door-to-door soliciting funds, and Dell created a gofundme.com page. Many of the donations were anonymous, but a notable one came from Tim DeMott, a Colquitt County farmer Garrett had worked for.

Kathy introduces Dell as “our angel.”

“We owe it to God and to this woman being obedient,” she said.

Dell showed Garrett a picture of the chair for his 28th birthday in June. Georgia Action Mobility Equipment, the Action Trackchair dealer based in Dawsonville, Ga., delivered it to his home on Wednesday.

Philip Shadle, of Georgia Action Mobility Equipment, said he delivers 40-50 of the trackchairs each year, of which four or five are funded by fund-raisers like the one Dell held.

“People really do care if they’re made aware of the situation,” Shadle said.

Garrett bubbled over with gratitude for everyone who had given to help him. The first thing he wanted to do once he was buckled in was raise the seat. Once he was up, he stayed that way for nearly an hour.

“Standing is immense to me,” he said. “Just being able to stand again. To feel 6 feet tall again. I’ve been 4-foot-11 for three and a half years.”

The human body is built to stand. When it doesn’t some things don’t work right. Being able to come erect will improve his circulation and digestive systems, Garrett said, and he’s hoping it will re-train his brain how to stand and, ultimately, how to walk.

Garrett said his recovery has been a long road. Some of the people he met in recovery, who were paralyzed when he was, have gone on to take their lives. He said he’s had some tough times where he just had to get his mom to sit with him until he could shake the depression.

He held onto his faith to get through, and some of his experiences were broadcast on Facebook.

On Wednesday he told about one of his posts.

“I was in absurd pain,” he said. “The pain medication wasn’t touching it.”

The nurse who was tending to him kept checking on him. Somehow, he got the sense she didn’t know Jesus but she wanted to. He witnessed to her and they talked for a long time, he said. When they were done, the pain had gone away.

“[The chair] benefits me a lot,” Garrett said, “but I hope it benefits His purpose even more.”