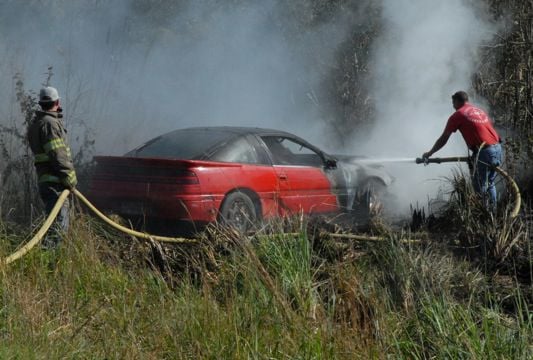 Volunteer firefighters extinguish a car fire on Highway 133 Wednesday. The car caught fire after it was forced off the roadway by another vehicle in what law enforcement officers describe as an assault. 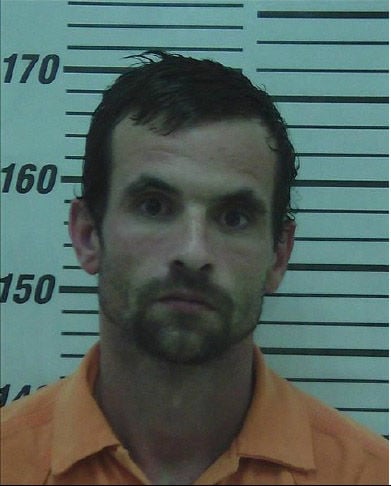 Volunteer firefighters extinguish a car fire on Highway 133 Wednesday. The car caught fire after it was forced off the roadway by another vehicle in what law enforcement officers describe as an assault.

MOULTRIE, Ga. — A Colquitt County man being sought in connection with a Wednesday roadway assault on a former girlfriend already faced charges related to the kidnapping in September of the same woman.

On Thursday afternoon law enforcement agencies in multiple counties were on the hunt for Casey Lee Merritt, 30, of 281-C Dunn Lane.

Jonathan Sinclair, 24, of Funston, was forced off the roadway on Highway 133 North. Katie Speir, 23, of Worth County, was a passenger in the car at the time.

The driver of a Honda Accord basically performed a police intervention technique -- “PIT” -- maneuver used by police to end car chases to send the Mitsubishi off the roadway, Colquitt County Sheriff’’s Sgt. Ronald Jordan said. The car came to a rest about a half mile north of Blasingame Road.

It traveled into a boggy area and came to a stop and later caught fire.

Police said the Accord’s driver — believed to be Merritt — then threatened Sinclair with a knife. Sinclair defended himself with a stick and Merritt eventually drove away.

“He threatened to stab them,” Jordan said. “He’s still outstanding.”

In September Merritt was arrested in connection with Speir’s abduction on Sept. 9 at Southern Regional Technical College, police said. Speir was grabbed by the hair and forced into the car.

Merritt drove around for a couple of hours, police said, and Speir was not allowed to get out of the car and was struck several times in the face and head. When Merritt stopped the car Speir was able to get behind the wheel and drove to the Moultrie Police Department.

Speir had visible injuries, according to police. Merritt was arrested about two weeks after the incident during an unrelated traffic stop made by the Georgia State Patrol.

He was charged with kidnapping, false imprisonment and battery (family violence) in connection with Speir’s abduction.

Merritt also faces a stalking charge in Worth County involving Speir, who had been granted a court protective order against him.

Merritt was charged in early January with interference with a 911 call and two counts simple battery, and in February was charged with stalking.

MOULTRIE, GA.- Woodrow Wilson Boyd, 95, of Moultrie, died Thursday, January 23, 2020 at Cobblestone Health and Rehabilitation. Graveside rites will be 2:00PM Saturday, January 25, 2020 at Schley Cemetery with Mr. David Boyd officiating. Born April 13, 1924 in Moultrie, he was the son of the …