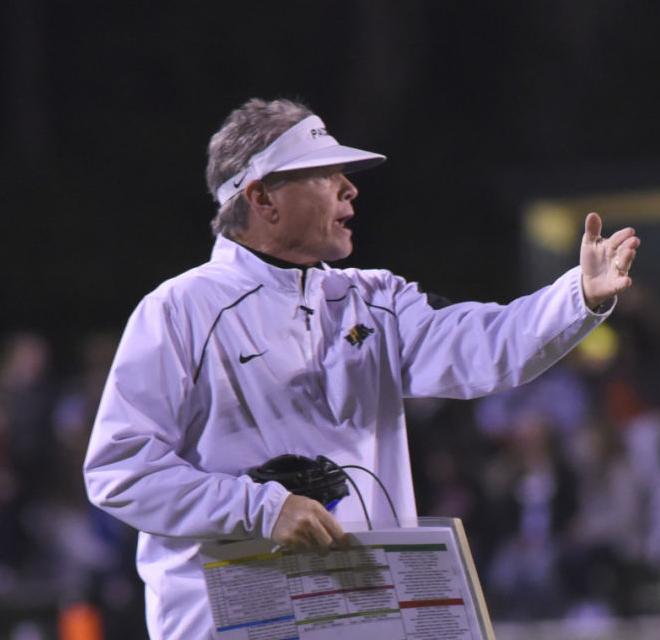 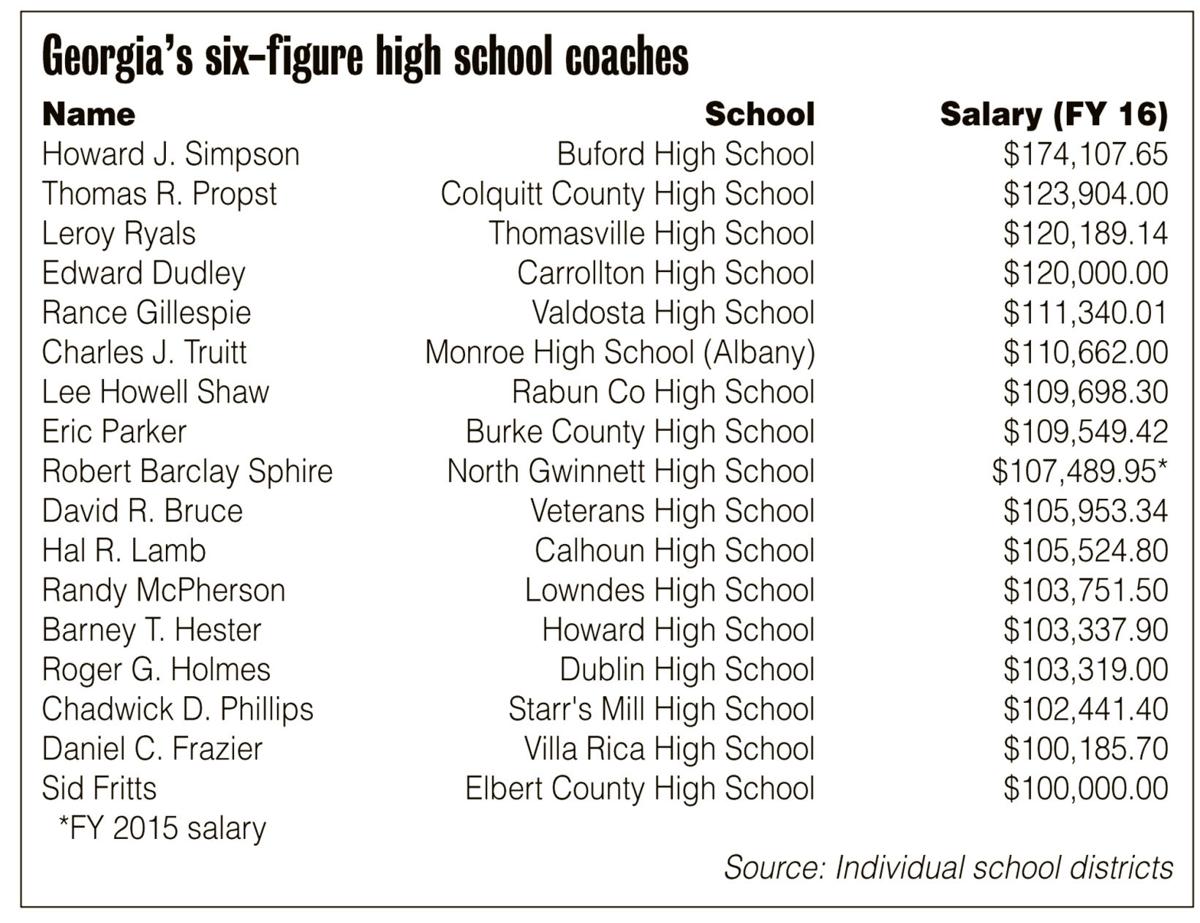 MOULTRIE – The Colquitt County Packers had just ended another Friday night with a victory – their 26th straight. But as the stadium emptied, the team’s visor-wearing coach stood on the field in distress.

“We should have beat this team right here 67, 69 to nothing, or three, or whatever,” Rush Propst said following a first-round playoff win over North Paulding. “That’s the way it ought to be when you come out and dominate.”

The scoreboard instead read 48 to 16 - a performance dominant enough for USA Today to elevate Moultrie to the No. 3 spot in a national poll, if not up to Propst’s personal standards.

Propst, 57, is passionate, demanding and unflinchingly competitive. There’s another cause for his restlessness, too: The community’s expectations are just as high.

He is well compensated for the pressure. Propst - the nationally recognized former head coach of Hoover High School, a perennial powerhouse in Alabama - is one of the highest paid public high school football coaches in all of Georgia.

He is one of at least 17 coaches earning a six-figure salary in the state, according to an analysis of state data and requests for public information submitted to dozens of local school districts.

Propst, whose salary could top nearly $134,000 if Colquitt County wins state again, said the money comes with demands on par with those heaped onto college coaches with much higher salaries.

“If you don’t win games in these big-time jobs in high school football, you’re getting fired, plain and simple,” he said in an interview.

Like other communities, Moultrie turns all of its attention on Friday nights in the fall to high school football. It’s not uncommon for 10,000 people to fill the stadium for big games – in a county with 46,000 people.

“It’s our team. It’s our community,” said Darrell Moore, president of the Moultrie - Colquitt County Chamber of Commerce. “I’d be excited if Atlanta won the Super Bowl or if Georgia won the national championship, but that doesn’t do anything for Moultrie.”

Propst, whose career in Alabama was tracked by a reality cable television show, is so popular in Moultrie that Rocky’s T-Shirts had to expand its visor selection at its downtown store.

“No one was wearing a visor in Moultrie before Coach Propst got here,” said Mike Sumner, a Moultrie native who drives down from his home in Gray to catch the games.

Competitive athletic programs – particularly football – can be a morale boost in poor communities, a unifying force in others, and a source of local pride wherever people can brag about their home team.

School officials value the programs as tools to develop character, keep students in school and provide an avenue for college. At Colquitt County, for example, 16 players from last season’s team were scholarships – half of which were for Division 1 schools.

Football is also a significant source of revenue for local school districts. It brings in money to pay for much larger athletic programs and other sports that don’t attract the same, ticket-paying crowds.

That fuels the internal pressure placed on football coaches to succeed on the field, Propst said.

But football can take on an outsized importance in some areas of the state, especially in South Georgia.

Valdosta’s Rance Gillespie will make about $111,000 this year, while Lowndes High School’s Randy McPherson will be paid nearly $104,000, according to information provided by the districts.

Gillespie was the fifth highest paid employee in the Valdosta when he took the field in 2013, while McPherson was the sixth in his district, according to the most recent data published. Propst, meanwhile, was the third highest paid in Colquitt County, behind only the superintendent and an assistant superintendent. Thomasville paid only its superintendent, Sabrina Boykins-Everett, more money than it gave its football coach.

Dr. Samuel DePaul, who is Colquitt County’s superintendent, said the coach’s pay took him aback when he first started the job more than three years ago.

DePaul said he was told, “That’s what they pay here when you have the Valdostas and the Lowndes and Coffee County, and you go right across the state to Camden County.”

“That’s just expected,” he said. “That’s the norm, which is exciting because the football’s exciting – I will say that.”

Next spring, Colquitt County will ask voters to support a $3.5 million indoor practice facility that would give athletes a place to practice while taking refuge from the South Georgia heat and lightning storms.

Big pay isn’t just for big-school coaches. The highest paid coach in the state, Jess Simpson, coaches at Buford High School, north of Atlanta, according to the analysis of state and local education data. The Wolves compete among teams in AAAA - the state’s third-highest classification. Simpson will earn $174,000 this year.

Simpson’s teams are ruthless, shutting out one opponent this season with a 77-point win. Buford has won state championships three years in a row, and is competing for a fourth. Seven of its titles have been won since Simpson’s arrival in 2005.

In an email statement, Buford Superintendent Geye Hamby said there should be more “financial emphasis on the efforts of Georgia educators and the quality of resources provided to our children of this great state.”

In Buford, the average teacher pay during the 2013 school year – the most recent information available – was $64,963.

“I believe all teachers, coaches, and administrators in the state of Georgia should be paid more,” he said.

Big coaching salaries don’t just reach into the six-figure range. Two years ago the average Georgia teacher made $52,924 – about $4,000 less than the national average.

That same year, nearly four-dozen coaches in the state were paid more than $90,000 a year, according to the salary analysis.

High salaries don’t guarantee success. In Thomasville, where the district pays its coach $120,000, the AA school that plays in one of the state’s smallest classifications just wrapped up its first one-win season in history.

Superintendent Boykins-Everett wouldn’t comment on Coach Leroy Ryals’ future. The coach, who has been at the school for three seasons, has another year on his contract. He didn’t responded to a request for comment.

Boykins-Everett noted that his salary is “not so extraordinarily out of line with some of those closer to us.”

“We clearly had high expectations and priorities for a stellar athletic program,” she said. “That’s been the tradition here in Thomasville.”

As far as she knows, Ryals is the highest paid coach Thomasville has ever had.

It’s likely true for a lot of districts, and Propst said he expects coaches’ pay to continue to rise.

“The arms race will not stop,” he said. “The best coaches are going to go after the best jobs with the highest money.”

School districts cover those salaries by supplementing a standard educator’s salary that is determined by experience and certification level.

Supplements are added for staff who perform additional duties. The size of those supplements - determined by local school officials - vary wildly.

Including the district’s contribution toward his retirement, his compensation is about $123,904. The district also pays a bonus to coaches whose teams reach the playoffs. For Propst, it could mean another $10,000 if the Packers clinch another state title.

Simpson’s coaching supplement in Buford is $75,000 – which grew by $35,000 this year. Hamby didn’t respond to a question asking why the supplement increased.

Several Georgia coaches who earn a six-figure salary do so partly because they also work as their schools’ athletic directors. Calhoun High’s Hal Lamb and Elbert County High’s Sid Fritts – both AAA schools – play those dual roles, as does Thomasville’s Ryals. Lamb, whose team won a state championship last year, is paid nearly $106,000. Fritts gets $100,000.

Elbert County Superintendent Chuck Bell said the coach is one of the most important hires a district can make.

“There’s no escaping the fact that in a small community like our own, he is looked upon as an important leader of young people,” he said.

The sentiment is shared throughout the state - even in places, like Moultrie, where the coach is not the athletic director and does not have traditional classroom teaching duties.

“He probably makes about $2 an hour when you look at all the time they put in year-round,” said Moore, the chamber president, referring to Propst.

As long as Propst chalks up wins, no one appears to be complaining about his salary.

“He’s worth every penny,” says Steve Lazarus, a downtown retailer who is active in the Packer Touchdown Club.  “If he wasn’t winning like he’s winning, it’d probably be a different story.”

No one’s had to think about that for a while, but Moore said the memory of glum Friday nights spent watching the Packers lose hasn’t faded for him.

The district hired Propst in 2008 to revive the program. When he took over, the team hadn’t been to the playoffs in three years. It had been more than a decade since a squad brought home a state championship title.

After a rocky inaugural season, Propst gave the community what it wanted. The school has been to the playoffs every year since, making it to the semifinals each time. The team competed for state in 2010 and 2014, winning a coveted championship title last year.

Propst has been coaching now for 35 years. At this point, with one more year between him and retirement eligibility, Propst said there isn’t much that could lure him away from Moultrie.

It would take a college job, he said, or another district that “just loads the boat down financially.”

Even then, he said he’d have to think about it.

“This place has been good to me, and I think I’ve been good for it,” he said.

Plus, he’s far from content. He’d like to snag multiple state titles here. He also aspires to triumph in at least 42 more games to round out his total career wins to 300.

“In this sport – or any sport – you’re either going forward or you’re going backward,” he said. “You can’t stay status quo.”