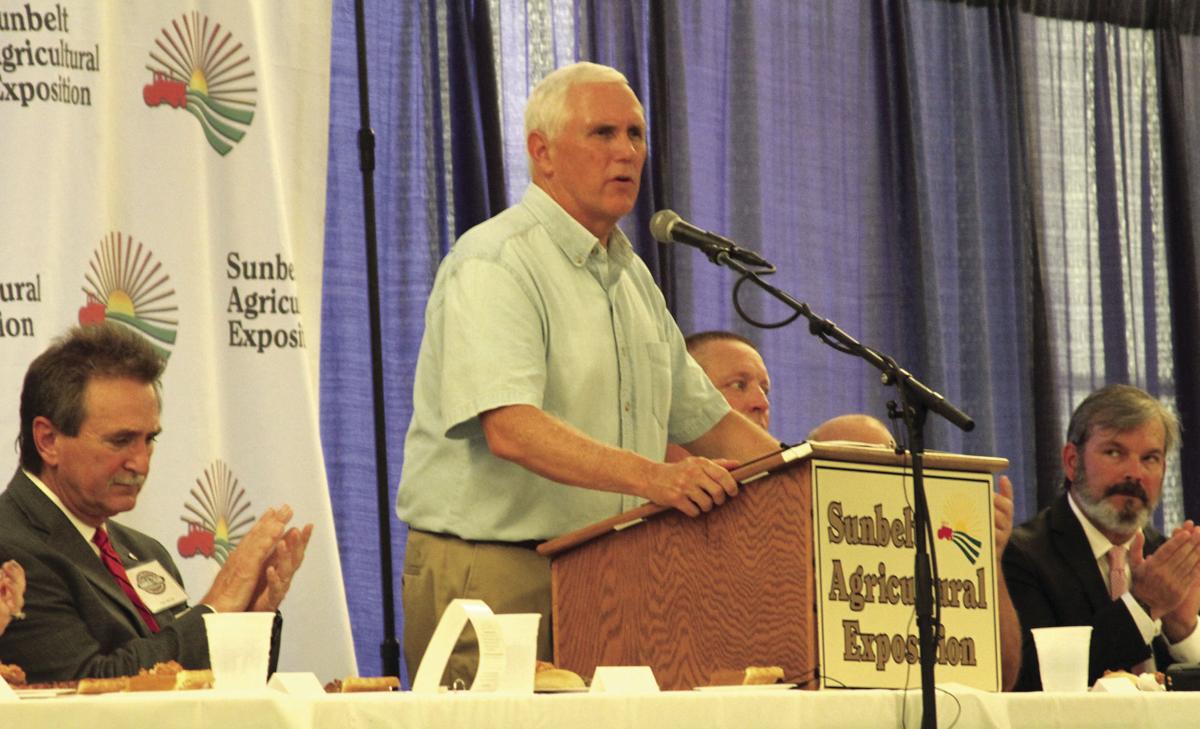 Vice President Mike Pence addresses audience on Tuesday at the Willie B. Withers Sunbelt Ag Expo luncheon at Spence Field on the first day of the annual farm show. 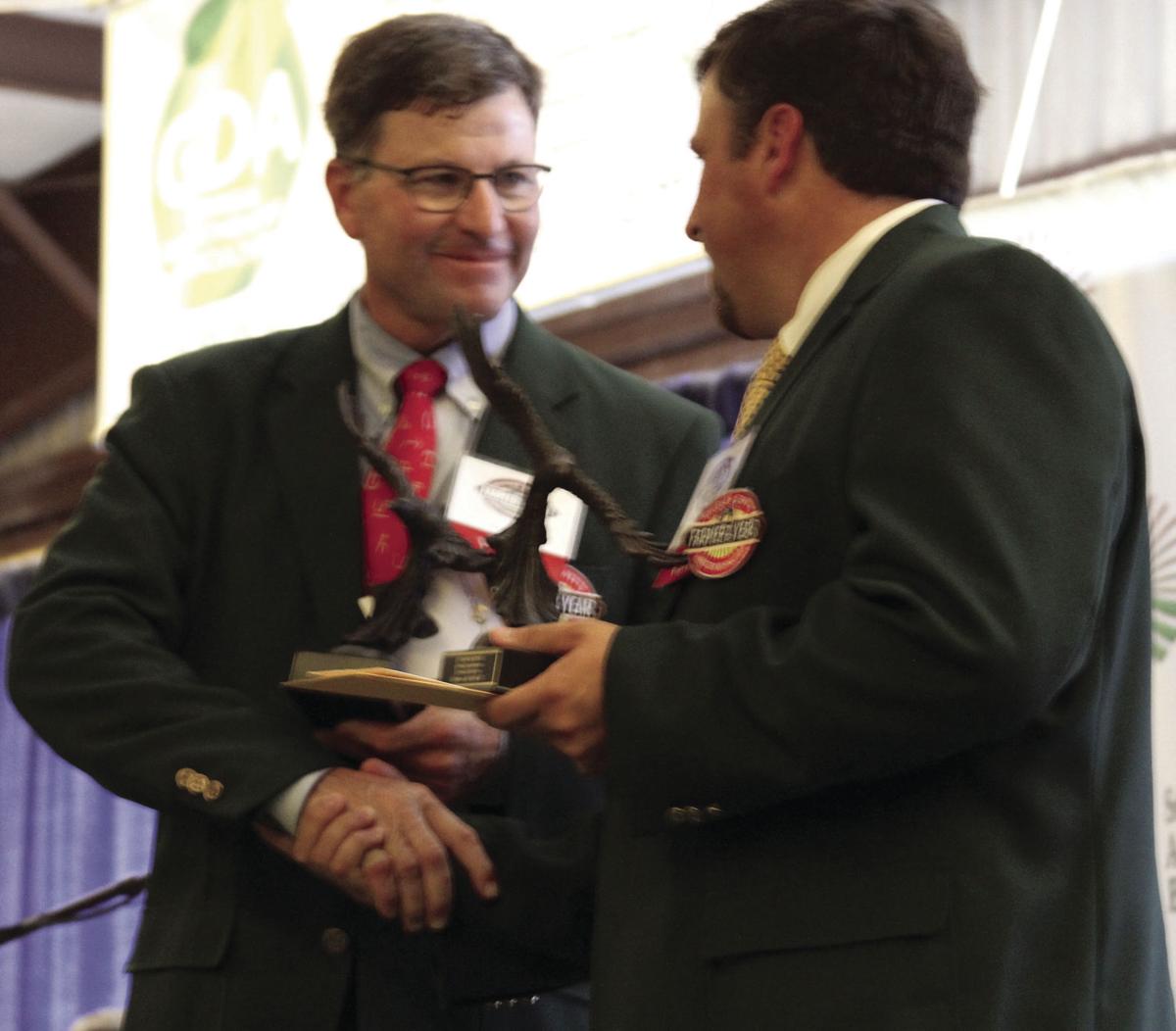 Kevin Yon, left, is congratulated by John Verell of Tennessee after Yon is announced as farmer of the year winner Tuesday at the Sunbelt Expo. 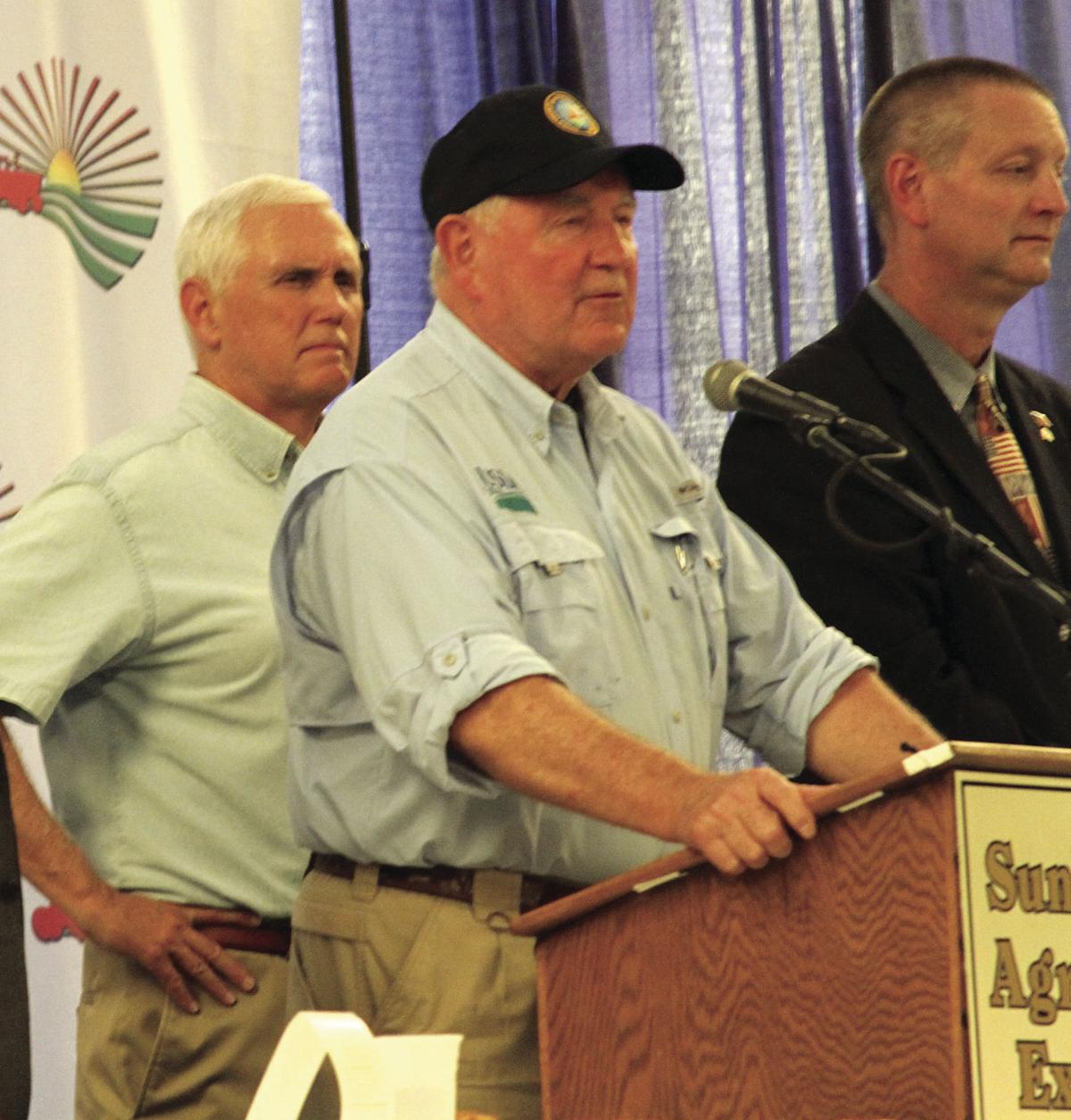 Vice President Mike Pence addresses audience on Tuesday at the Willie B. Withers Sunbelt Ag Expo luncheon at Spence Field on the first day of the annual farm show.

Kevin Yon, left, is congratulated by John Verell of Tennessee after Yon is announced as farmer of the year winner Tuesday at the Sunbelt Expo.

MOULTRIE, Ga. — An annual Sunbelt Ag Expo luncheon on Tuesday that was part recognition of farmers for a job well done and part commiseration for those in the region whose lives were shattered by Hurricane Michael lured in an unexpected visitor -- the vice president of the United States.

On the opening day of the 41st edition of the annual farm show those attending the Willie B. Withers luncheon were greeted by agents who examined the contents of bags and used metal detecting wands at the entrance of the Maule Aircraft hangar where it is held.

A short time later some of Moultrie Mayor Bill McIntosh’s welcoming remarks to visitors nearly were drowned out by the roar of landing aircraft.

Vice President Mike Pence, who was in the area examining storm damage, pledged the federal government will be there as the region recovers and touted the economy under President Donald Trump.

“Michael was a once in a generation storm that dealt a devastating blow to Florida and the Sunbelt (area),” said Pence, whose trip was taking him to hard-hit Decatur County later in the afternoon.

Cotton and pecan growers and the vegetable and poultry industries in the region were heavily affected, he said.

“We’ll be there to help Georgia and the area recover. The spirit of people in this region, the strength of the people of this area is inspiring (America). It really is.”

After Pence left the hangar to continue his travels the ceremony honoring the 2018 Southeastern Farmer of the Year resumed, with South Carolina’s Kevin Yon selected out of a group of winners from eight states. Yon was the 29th farmer recognized by Swisher International and Sunbelt Expo.

The putative star of the show didn’t seem to mind being upstaged by the visitor from D.C.

“That was such a tremendous honor that he thought enough about rural America to come,” Yon said.

Yon serves on a number of Angus and beef organizations, including as president of the American Angus Association.

The son and grandson of farmers who sharecropped other people’s land, Yon’s dream was to own his own slice of real estate. Today he operates 4,258 acres in the Ridge Spring, S.C., area.

“I stand before you the son of a sharecropper,” Yon said. “He never owned an acre.”

Yon bought his first Angus heifer at the age of 12, the same year he started planting a 20-acre plot. When he was a teen-ager he and a group of friends drove a “woody” station wagon “as long as a country clothes line” to Moultrie to attend Expo.

After meeting his counterparts from Alabama, Arkansas, Florida, Georgia, Kentucky, Mississippi, North Carolina, Tennessee and Virginia, Yon said, it was evident to him that they all were worthy of winning the $15,000 prize, along with $500 gift certificates from Southern States Cooperative and Southern States. As winner, he also will have the use of a Massey Ferguson tractor for a year, and also wins a smoker grill from Hays LTI, a Columbia jacket from Ivey’s Outdoor and Farm Supply and a Henry Golden Boy special edition rifle from Reinke Irrigation.

State winners received a $2,500 cash award from tobacco company Swisher International, which also paid travel expenses for all state winners, a $500 gift certificate from Southern States and a Columbia vest.

“I think you could have put our names in a hat and pulled one out, and you’d have had a great winner,” Yon said during his remarks to the audience.

While it was a celebratory atmosphere at the ceremony, it was not lost on Yon that there are many suffering not far away who lost homes and still are without electricity, he said during an interview following the luncheon.

“Our hearts go out to those who have been affected by this,” he said.

Expo Executive Director Chip Blalock echoed those thoughts when speaking with a reporter from The Observer.

“They called and said the vice president’s coming with (U.S. Agriculture) Secretary (Sonny) Perdue, and they said we’ve got to make that happen, and we did.”

Expo bounces back from hurricane

MOULTRIE, Ga. — Driving to work last Thursday, Chip Blalock dreaded what he would see when he got there.

HARTSFIELD [mdash]Stanley Floyd Faison, 82, of Hartsfield, died Thursday, July 30, 2020 at his residence. Arrangements have been entrusted to Baker Funeral Home.