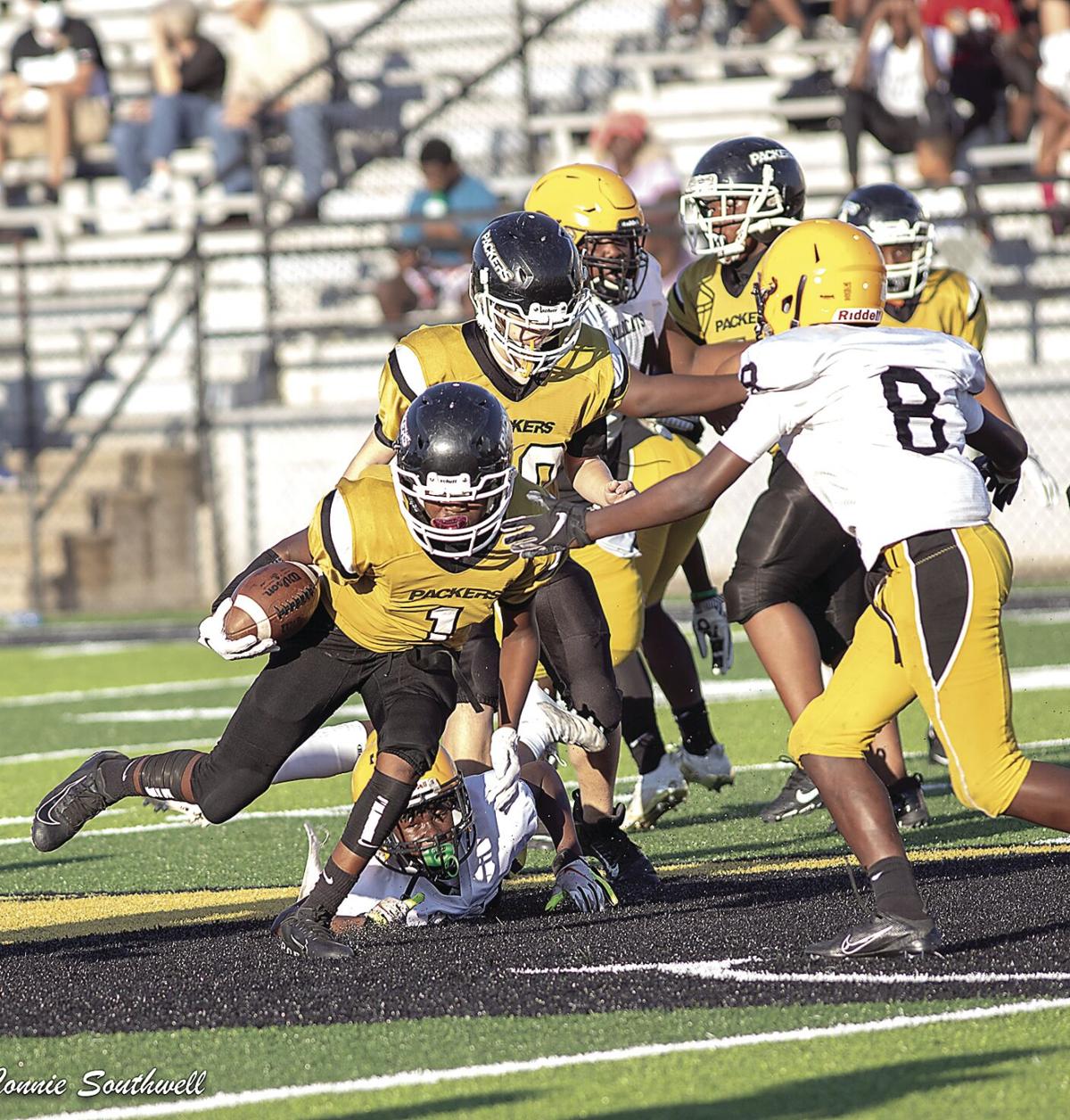 Colquitt County seventh-grader Rysheed Fuller carries the ball in the game against Valdosta on Thursday on Tom White Field at Mack Tharpe Stadium. 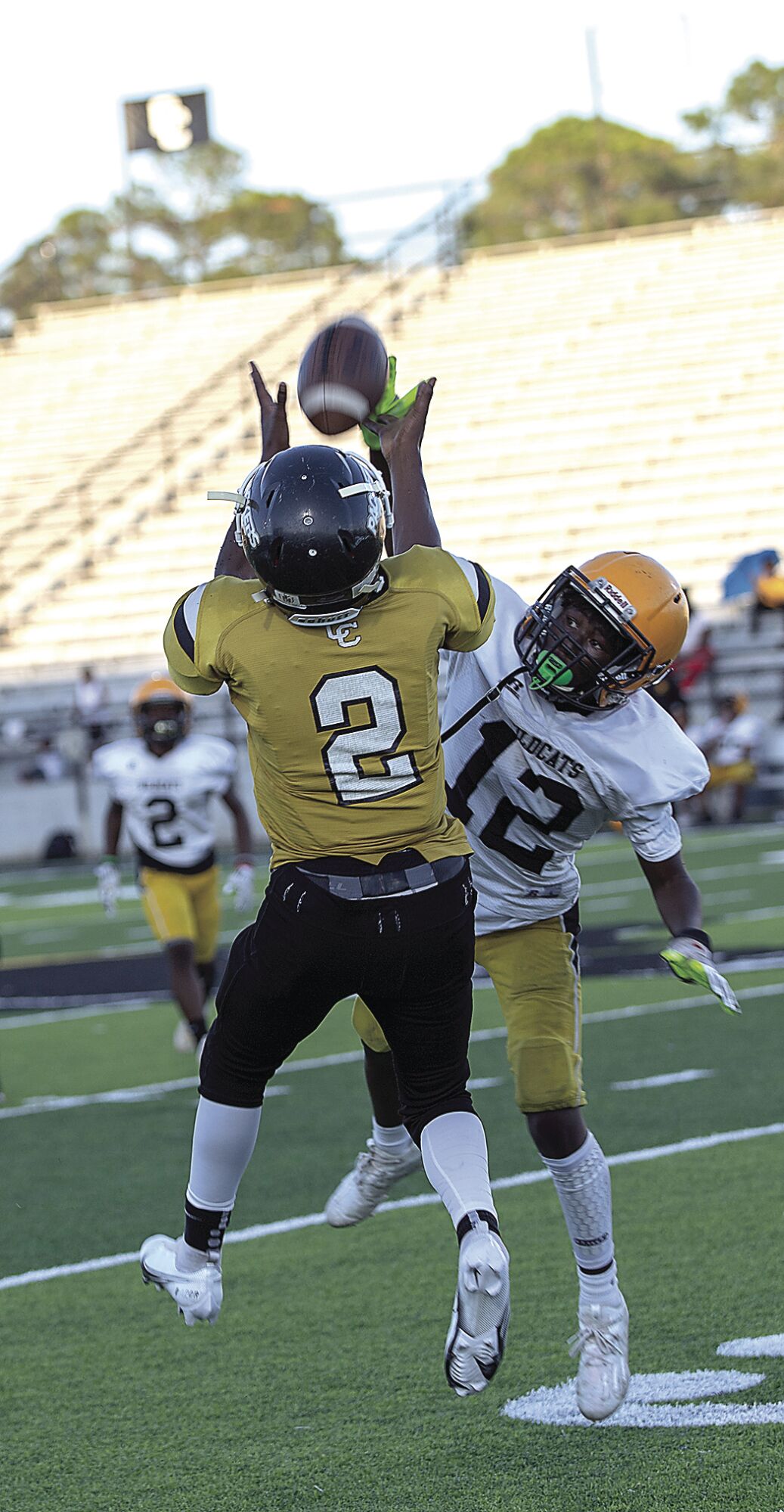 Colquitt County seventh-grader Rysheed Fuller carries the ball in the game against Valdosta on Thursday on Tom White Field at Mack Tharpe Stadium.

MOULTRIE - The Colquitt County eighth-grade and seventh-grade teams managed just a combined three touchdowns in a pair of losses to Valdosta on Thursday on Tom White Field at Mack Tharpe Stadium.

The eighth-grade Packers came within two minutes of their first win of the season, but fell 14-8.

Trailing 8-6, Valdosta took over on the Packers 25 after a short punt and needed just four plays to score the go-ahead touchdown on a 9-yard run with exactly 2 minutes remaining.

After the ensuing kickoff, the Packers drove to the Valdosta 25, but turned the ball over on downs with 34 seconds remaining.

The eighth-grade Wildcats took a 6-0 lead, scoring on a 3-yard run to cap their first possession of the game.

Colquitt then kept them off the scoreboard until the late score.

The Packers scored on a safety with 2:35 left in the half and Valdosta led 6-2 at the break.

The first half was highlighted by a pair of interceptions by Colquitt County defensive back Day’Shawn Brown that shut down the final two Valdosta possessions.

Colquitt took the lead when Camden Harden connected with Brown on a 43-yard touchdown pass with 5:41 left in the third quarter.

Colquitt was unable to score again and despite a strong effort by its defense, the eighth-graders fall to 0-3.

In Thursday’s second game, the seventh-grade Packers took a 6-0 lead when Bryson Hunt scored on a 43-yard touchdown run with 2:17 left in the first quarter.

But Valdosta countered on its next possession, driving 60 yards on seven plays to score on a 28-yard touchdown pass. The Wildcats added the 2-point conversion to take an 8-6 lead with 42 seconds left in the first quarter.

Colquitt then drove 43 yards to score on a 4-yard run by Hunt with 21 seconds left in the first half. A run for the conversion attempt failed and Colquitt was down 16-12 at the half.

The Packers’ late scoring drive featured a 20-yard pass completion from Rysheed Fuller to Hunt and a 16-yard run by Fuller to the Valdosta 4.

Valdosta extended its lead on a 3-yard touchdown pass to a leaping receiver in the end zone that extended the Wildcats lead to 22-12 with 3:34 left in the third quarter.

The Packers were unable to score in the second half and fell to 1-1 on the season.

The eighth-grade and seventh-grade teams will play at Coffee on Thursday, Oct. 8.