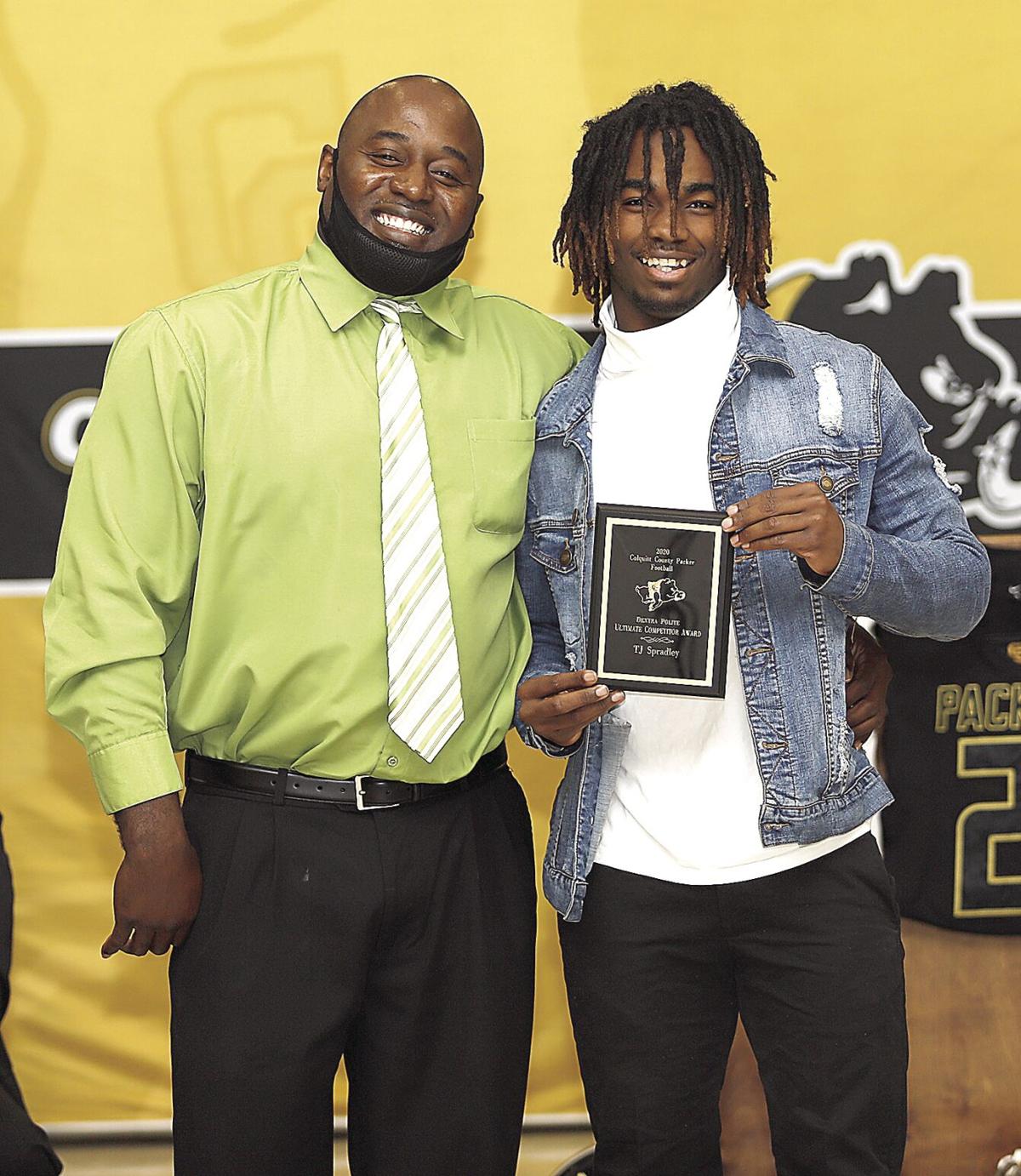 Colquitt County cornerback Antonio ‘TJ’ Spradley holds the Dextra Polite Ultimate Competitor Award presented to him on Sunday by Dextra Polte, his coach and the man for whom the award is named. 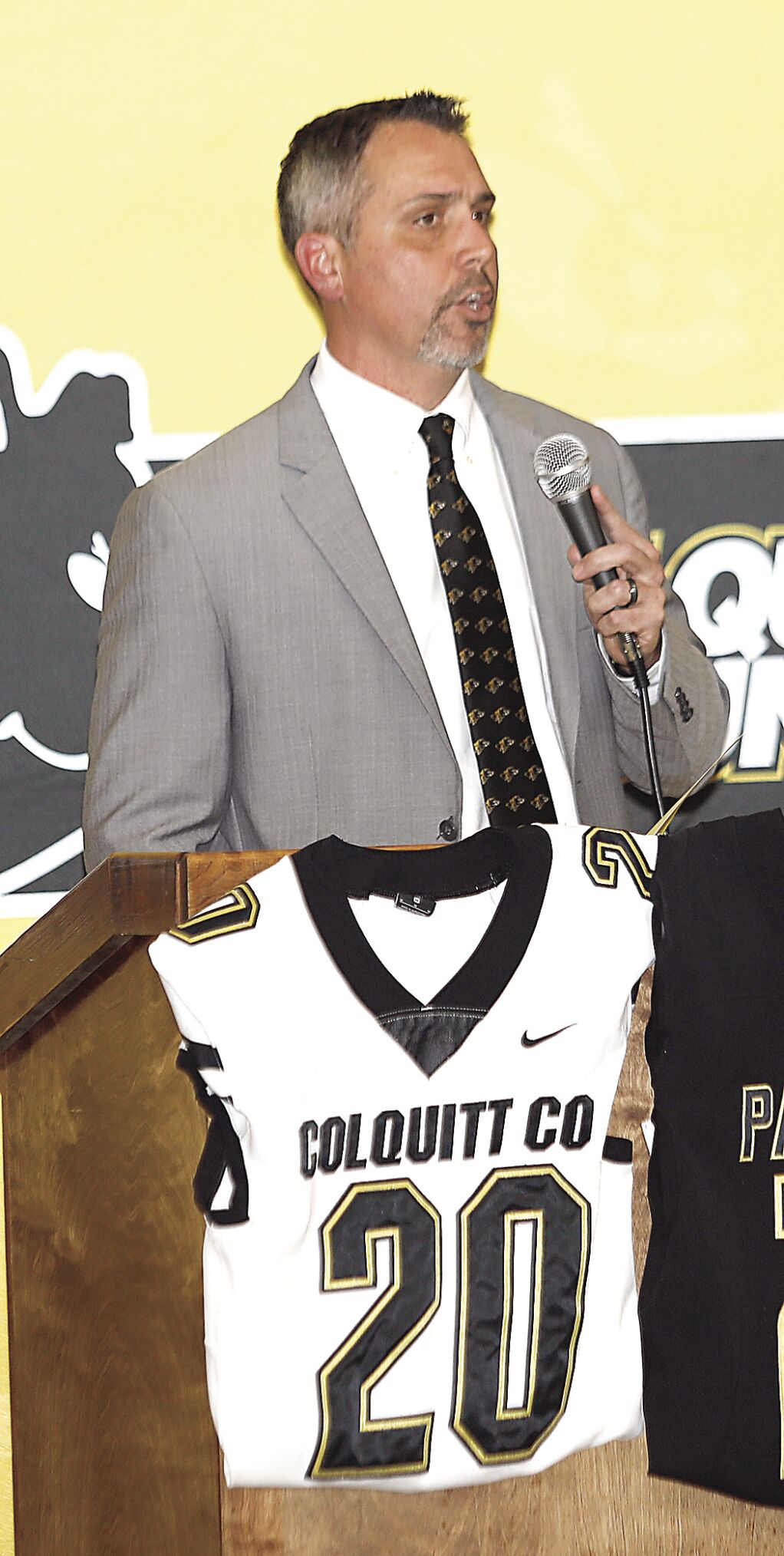 Colquitt County head football coach Justin Rogers commended his seniors for staying the course during a difficult, but ultimately successful, 2020.

Colquitt County cornerback Antonio ‘TJ’ Spradley holds the Dextra Polite Ultimate Competitor Award presented to him on Sunday by Dextra Polte, his coach and the man for whom the award is named.

Colquitt County head football coach Justin Rogers commended his seniors for staying the course during a difficult, but ultimately successful, 2020.

MOULTRIE – After what Colquitt County football coach Justin Rogers called “a very trying year,” the Packers’ seniors and their families were honored on Sunday at a recognition event at the high school.

The seniors, who endured a year that included the cancelation of spring practices and a spring game, restricted summer work, no preseason scrimmage and two COVID-related quarantines during the 2020 season, still helped lead the Packers to a 9-1 record and a berth in the state quarterfinals.

“This was not the senior year you wanted,” Rogers told the players. “You went through something that was very difficult. But you stayed the course and were able to succeed.

“This is a very special group. I will never forget you.”

Rogers also said that while the seniors were obviously talented on the field, they exhibited great character as well.

The ceremony opened with the seniors been introduced. The seniors who were named to the All-Region 1-7A team then were recognized.

The individual awards presented and their recipients are:

• The George A. Horkan Sportsmanship Award, established in 1956, was presented by coach David Hill to receiver Orion Bonner.

• The Jimmy Jeter “Mr. Dependable” Award, established in 2011, was presented by Hill to receiver Le’Meke Brockington, who is already enrolled at the University of Minnesota, where he has received a scholarship to play football for the Golden Gophers.

• The William “Knuck” McCrary “Fighting Spirit” Award, established in 1965, was presented by coach Dave Windon to running back Jamaree Hill.

• The Ray Goff “Top Gun” Award, established in 2009, was presented by quarterback coach Joe Thornton to quarterback Xavier Williams, who is already enrolled at the UNC-Charlotte, where he will be a scholarship player on the football team.

• The Colquitt County Board of Education “Academic Commitment to Excellence” Awards, re-established in 2011, went to the top three senior student-athletes with the highest grade point averages in their class throughout their high school career. The recipients are Trey McCoy, 95.583; Jaheim Ward, 93.231; and Joey Stanford, 93.100.

• The Lavasky King “Packer Pride - Most Improved” Award, established in 2011, was presented by coach Mo Dixon to safety Jaheim Ward.

• The Bobby Cobb “True Grit” Award, established in 2010, was presented by coach Greg Carswell to Zy Brockington and Tucker Pitts.

• The Cameron Erving “Perseverance” Award, established in 2015, was presented by Rodemaker to safety Traveon Tuff.

To the parents of the Colquitt County seniors, Rogers said that families of football players always have to make sacrifices.

“But this year was a sacrifice like no other,” he said. “And you had no idea how risky it might be.”

And, Rogers added, “You have raised some great young men.”

The film support staff of Sissy Rowland and Mikiyah Fournoy was introduced by Greg Hall.

Rogers also announced that the first spring practice in pads would be held on May 5.

The Packers will hold an intrasquad scrimmage on Tom White Field at Mack Tharpe Stadium on Saturday, May 15, and will play host to Cairo in a spring game on Friday, May 21.