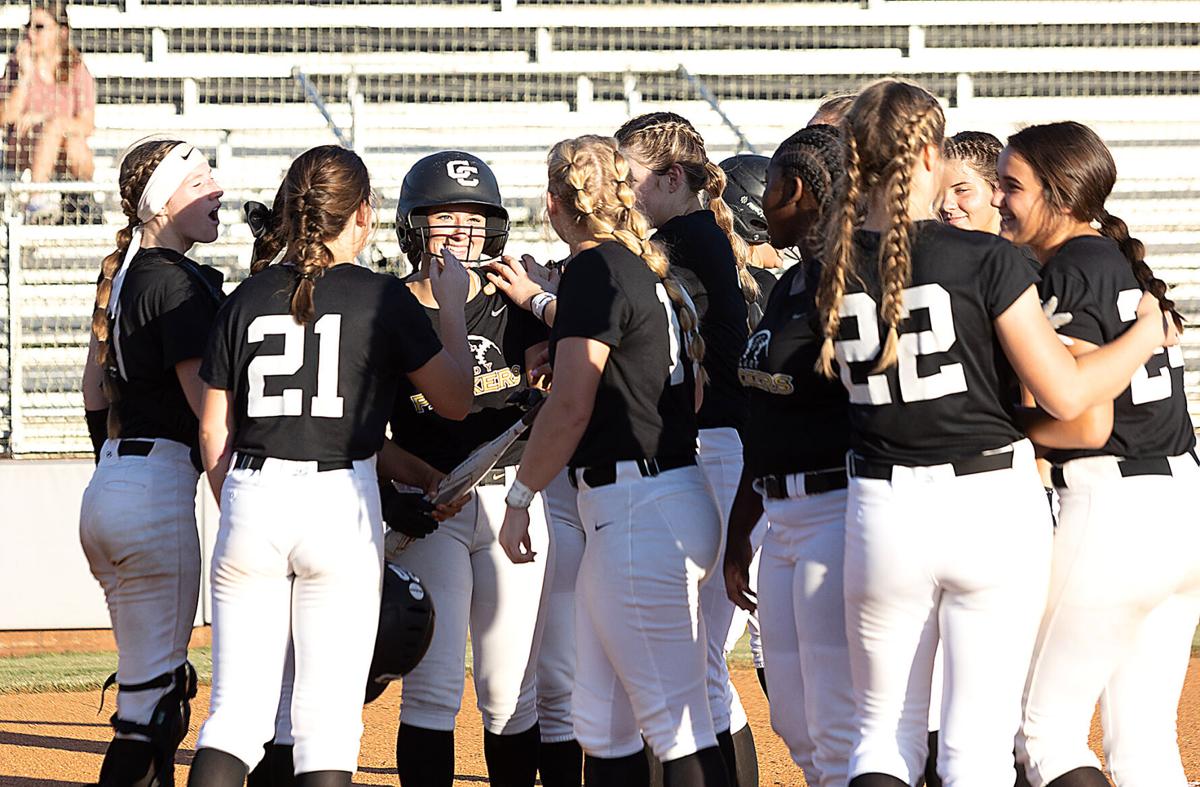 Colquitt County's Julia Duncan, third from left, is all smiles while being congratulated at the plate after hitting one of her two home runs in the Lady Packers first-round playoff sweep of Walton on Wednesday at Packer Park. 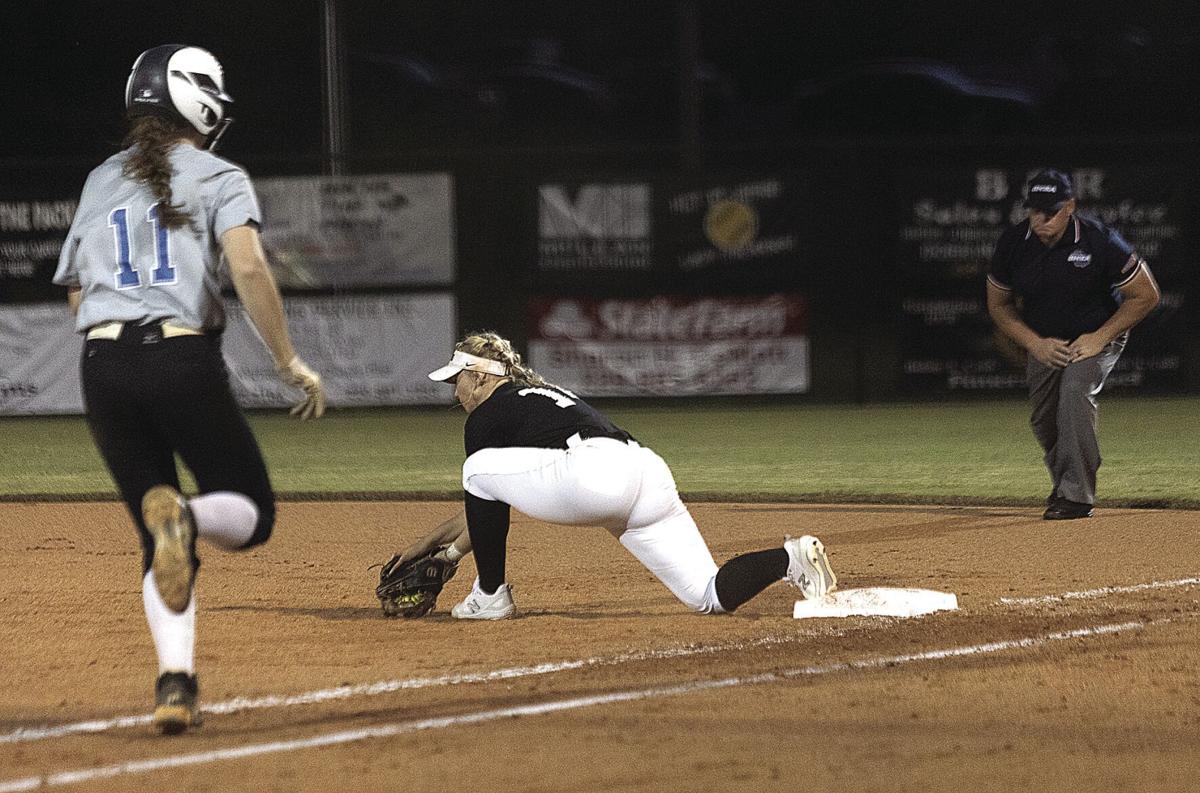 Colquitt County first baseman Morgan Holder digs a ball out of the dirt to retire Walton's Casey Ehlen in the Lady Packers' doubleheader sweep of Walton on Wednesday.

Colquitt County's Julia Duncan, third from left, is all smiles while being congratulated at the plate after hitting one of her two home runs in the Lady Packers first-round playoff sweep of Walton on Wednesday at Packer Park.

Colquitt County first baseman Morgan Holder digs a ball out of the dirt to retire Walton's Casey Ehlen in the Lady Packers' doubleheader sweep of Walton on Wednesday.

MOULTRIE - The rust accumulated from not having played in two weeks was evident in the first game of the Colquitt County softball team’s first-round Class 7A state playoff doubleheader against Walton on Wednesday at Packer Park.

The Lady Packers knocked that rust off late in the first game and looked more like their former selves in the second game of an 8-0,10-1 sweep of the Lady Raiders, who had bused down from Cobb County.

Colquitt scored five runs in the bottom of the sixth inning of Game 1 to put the run-rule in effect and then scored eight runs in the first three innings of the nightcap and went on to win in five.

The Lady Packers had not played since Sept. 30 when they closed out the regular season with a doubleheader sweep of Tift County.

But rain and wet fields caused the cancellation of the region tournament, forcing the Colquitt girls to take some time on Wednesday to rediscover their mojo.

The victories raised the record of the No. 3-ranked Lady Packers to 23-3 as they prepare to play a second-round best-of-3 series against Woodstock, which is expected to begin with a doubleheader on Wednesday, Oct. 20, also on Lady Packer Field.

The Lady Wolverines will bring a 12-9 record to Moultrie.

A second-round win would send the Lady Packers to the eight-team Class 7A state championship tournament, schedule to be held Oct. 28-30 at the Columbus Softball Complex.

Walton, the No. 4 team from Region 3, could not solve the Colquitt County pitching in either game on Wednesday.

Emily Allegood started in the circle for the Region 1-champion Lady Packers in Game 1 and allowed just two infield singles. She also hit a batter while striking out five.

Walton managed to get just two balls out of the infield, fly ball outs to lead off the fourth and fifth innings.

Maris Hopper was equally dominating in Game 2, giving up just one hit and hitting a pair of batters over five innings. She also struck out five batters.

Colquitt committed just one error in the doubleheader.

“The two weeks off hurt us,” said Colquitt County coach Chance Pitts. “Their pitcher had us off-balance in the first game, but I’m proud of the way we responded after that.

“And our pitching was awesome.”

In Game 1, Colquitt got the first two batters on in the bottom of the first when Katelyn Powers doubled and Allegood walked, but couldn't score.

But in the second, Colquitt got the only run it would need on a sacrifice fly by Powers that scored Bre Caldwell, who opened the inning with a walk.

A Carli Pearson groundout gave the Lady Packers a 2-0 lead in the third and a home run on a 3-2 pitch by Julia Duncan leading off the fifth made it 3-0.

Colquitt made only one out in the bottom of the sixth and that was a sacrifice fly by Pearson that made it 8-0 and gave the Lady Packers the run rule victory.

The Lady Packers had a hit in each of the six innings, but finally stitched together four in the bottom of the sixth to score five times.

Powers, Duncan and Madison Plymel each had two hits in the opener.

Caldwell, Morgan Holder, Laura Hailey Bryan and Jacey Wetherington had the others.

Plymel, Duncan and Pearson each drove in two runs.

Playing as the visitors in Game 2, the Lady Packers sent 11 batters to the plate in the top of the first inning, scoring five runs.

Duncan hit her second home run of the doubleheader, a long, high blast to left center field, in the second inning to put the Lady Packers up 6-0.

The Lady Packers third baseman also drove in runs in the first and seventh innings.

Her RBI single in the seventh put Colquitt up 10-0.

“How about Julia Duncan?” Pitts said. “She had a night, didn’t she?”

Walton scored its only run of the doubleheader in the bottom of the fifth before Hopper got Katie Holland to pop out to second baseman Carli Pearson to end it.

The Lady Packers needed only seven hits to score their 10 runs in Game 2.

Allegood and Duncan each had two and Powers, Hopper and Holder had the others.

Hopper and Allegood each drove in two.

Colquitt has now won eight straight and 10 of its last 11 by the run-rule.

Two other Region 1-7A teams were eliminated on Wednesday.

Lowndes, the Region 1 runner-up, dropped a home doubleheader to Hillgrove, falling 6-4 and 7-4.

Camden County, Region 1's No. 4 team remained alive after defeating Region 3 champion Harrison 4-1 in the first game of their doubleheader.

The deciding game will be played Thursday afternoon.

Mrs. Mary Martha Crews McBurney, 98 of Alexandria, Louisiana, passed from this life, Saturday, November 20, 2021 at her residence. Arrangements to be announced by Hixson Brothers of Alexandria.