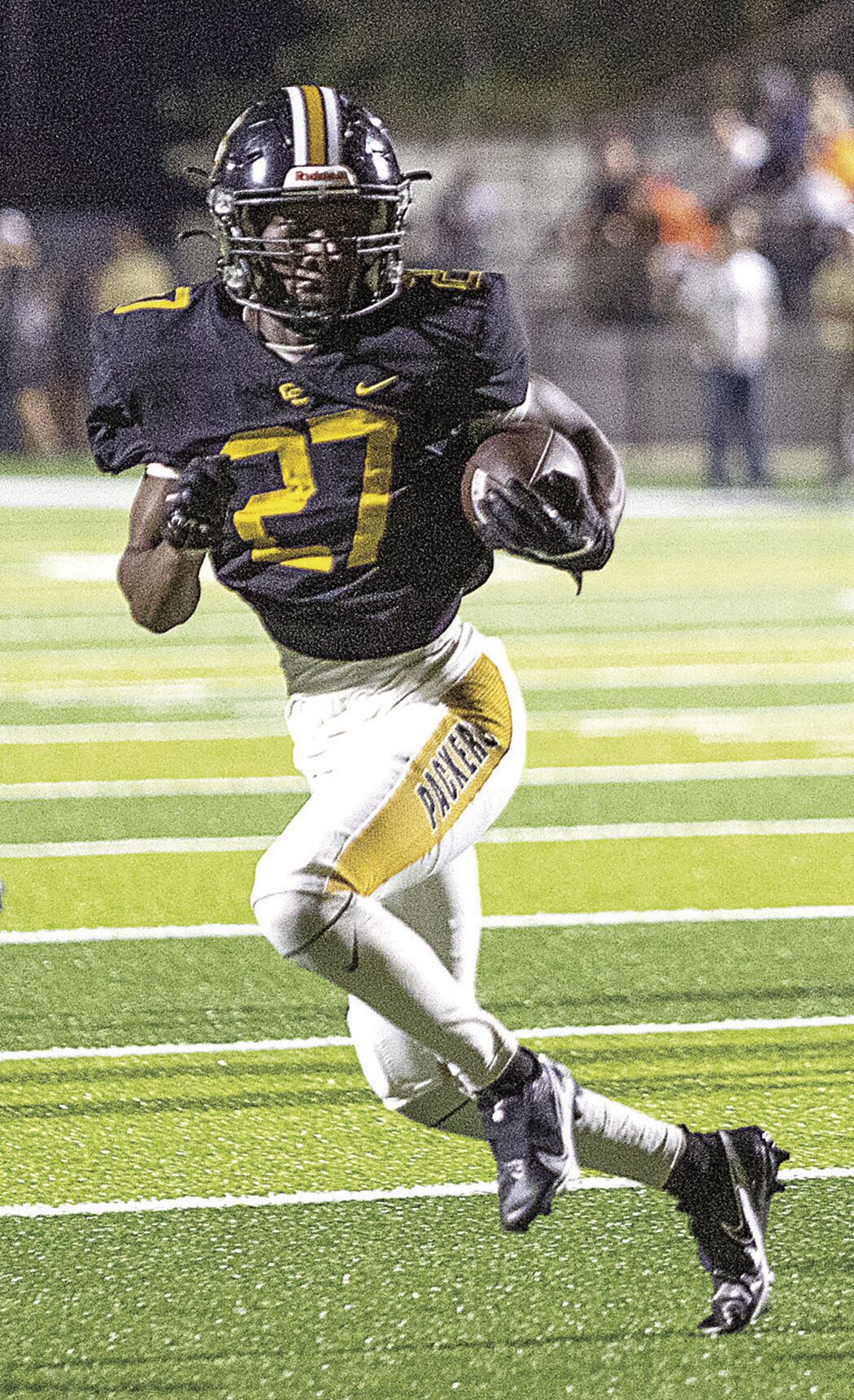 Sophomore running back Chad White heads to the end zone to score his first varsity touchdown in Colquitt County's 55-0 victory over Heritage. 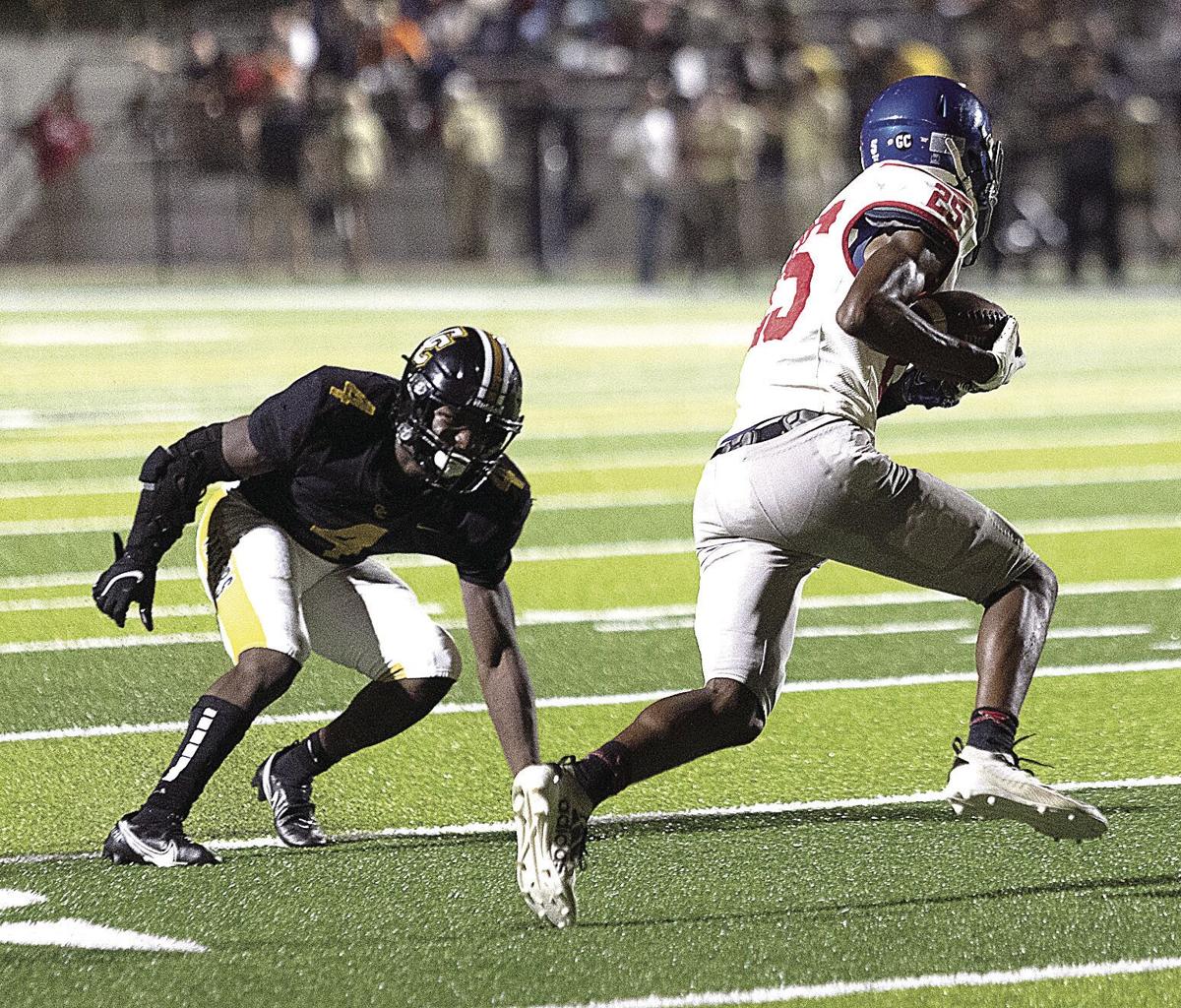 Colquitt County's Nick Pace prepares to take down Heritage High's Rashun Fountain in the victory over the Patriots. 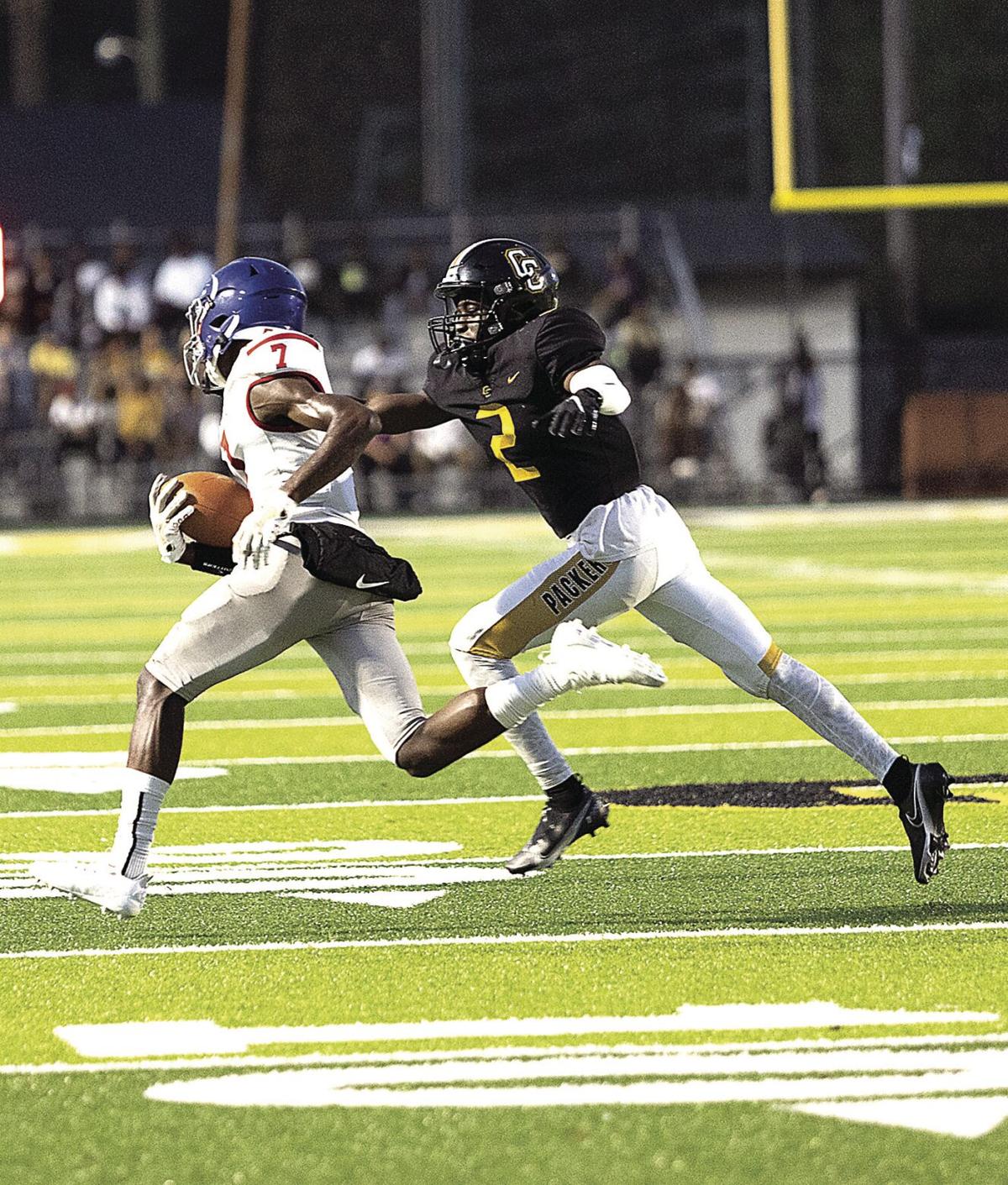 Sophomore running back Chad White heads to the end zone to score his first varsity touchdown in Colquitt County's 55-0 victory over Heritage.

Colquitt County's Nick Pace prepares to take down Heritage High's Rashun Fountain in the victory over the Patriots.

MOULTRIE — No one expects Friday night’s contest to be like last year’s meeting between Colquitt County and Northside-Warner Robins.

But the Packers would sure take it.

The two teams met at McConnell-Talbert Stadium on October 9 in the delayed 2020 season and the Packers scored nine touchdowns for the second week in a row to defeat the Eagles 63-14.

The Packers were coming off a 63-27 victory at Dothan and it is doubtful anyone anticipated a similar outburst the very next week.

But Orion Bonner, now playing at Glenville (W.Va.) State, took the opening kickoff back 75 yards for a touchdown and the Packers were off and scoring.

They led 14-0 after the first quarter, but blew the game open in the second, scoring four times and opening a 42-0 halftime lead.

The Packers were not able to rush the ball much that wet and dreary night, but did not need to.

Xavier Williams and Zane Touchton combined to complete 15-of-21 passes for 306 yards and six touchdowns.

Eight players scored the Packers nine touchdowns and Emmanuel Perez converted after each one.

Landen Thomas, Qway McCoy and Nick Pace, current members of this year’s Packers team preparing to meet the Eagles, each scored his first career touchdown in the game.

The Packers were ranked No. 3 in Class 7A heading into that game.

The Eagles were 2-3 and had lost the two previous weeks, 47-0 to crosstown rival Warner Robins and 52-12 to Richmond Hill.

Northside would go on to finish 5-6 in Chad Alligood’s first season on the job after following Kevin Kinsler.

This year’s Northside model has been considerably better so far.

The Eagles have won four of their five games this season.

Northside opened with 48-7 win over Veterans High and then took down Peach County 28-14.

After taking a forfeit victory over Howard, the Eagles were no match for crosstown rival Warner Robins, losing 49-7.

“Warner Robins had a lot of big plays and the game just got away from (Northside),” Packers coach Justin Rogers said.

“That’s not indicative of who they are.”

The Eagles are expected to try to move the ball on the ground.

“That’s what I would do against us,” Rogers said. “But, yes, they want to run the football and they aren’t scared to run the quarterback.”

Both Cedar Grove and Valdosta experienced some success rushing the football against the Packers.

Northside has four players who have rushed for more than 100 yards so far, including quarterback Cameran Brown, who leads the team with 145 yards on just 18 carries.

Also expected to carry the ball for the Eagles are Michael McClendon, who has 117 yards on 24 carries; Micah Thurman, 116 yards on 28 carries; and quarterback Damien Dee, 110 yards on 39 attempts.

Dee has completed 26-of-50 passes for 347 yards and five touchdowns.

The Eagles’ top target is Centavious Lowe, who is second in Region 1-6A with 14 pass receptions for 304 yards and five touchdowns.

Lowe, who caught two touchdown passes against the Packers last year, is second in the region in scoring.

Duke McClinton has 13 catches for 157 yards and two touchdowns.

“They have a lot of good high school football players who play hard and with pride,” Rogers said.

The game is just the fourth between the two schools.

Northside won both meetings when the two schools were in the same region in 2008 and 2009.

The Eagles won 31-7 in Moultrie in 2008 and took a 20-17 victory at McConnell-Talbert Stadium the following year.

Northside, which began play in 1963, has won 14 region championships and three state titles, the most recent coming in 2014 under Kinsler.

The Colquitt defense is expected to be without defensive tackle Ronald Durham, who is battling a health issue.

But Ontavious Carolina, who missed last week’s win over Heritage, is expected to return to his defensive end position.

The Packers offense was without Charlie Pace last week in the lopsided win over Heritage, but the Packers leading rusher should be rested and healthy for Northside.

He has run for five touchdowns and caught a pass from Neko Fann for another.

Fann, the Packers sophomore quarterback has completed 55-of-87 passes for 743 yards and 12 touchdowns.

Baby D Wheeler is no longer on the team, but Fann has other prime targets.

Also on Friday in Region 1-7A, Camden County will go to Coffee, Valdosta will be at Lowndes for the Winnersville Classic; and Tift County will play host to Worth County at Brodie Field.