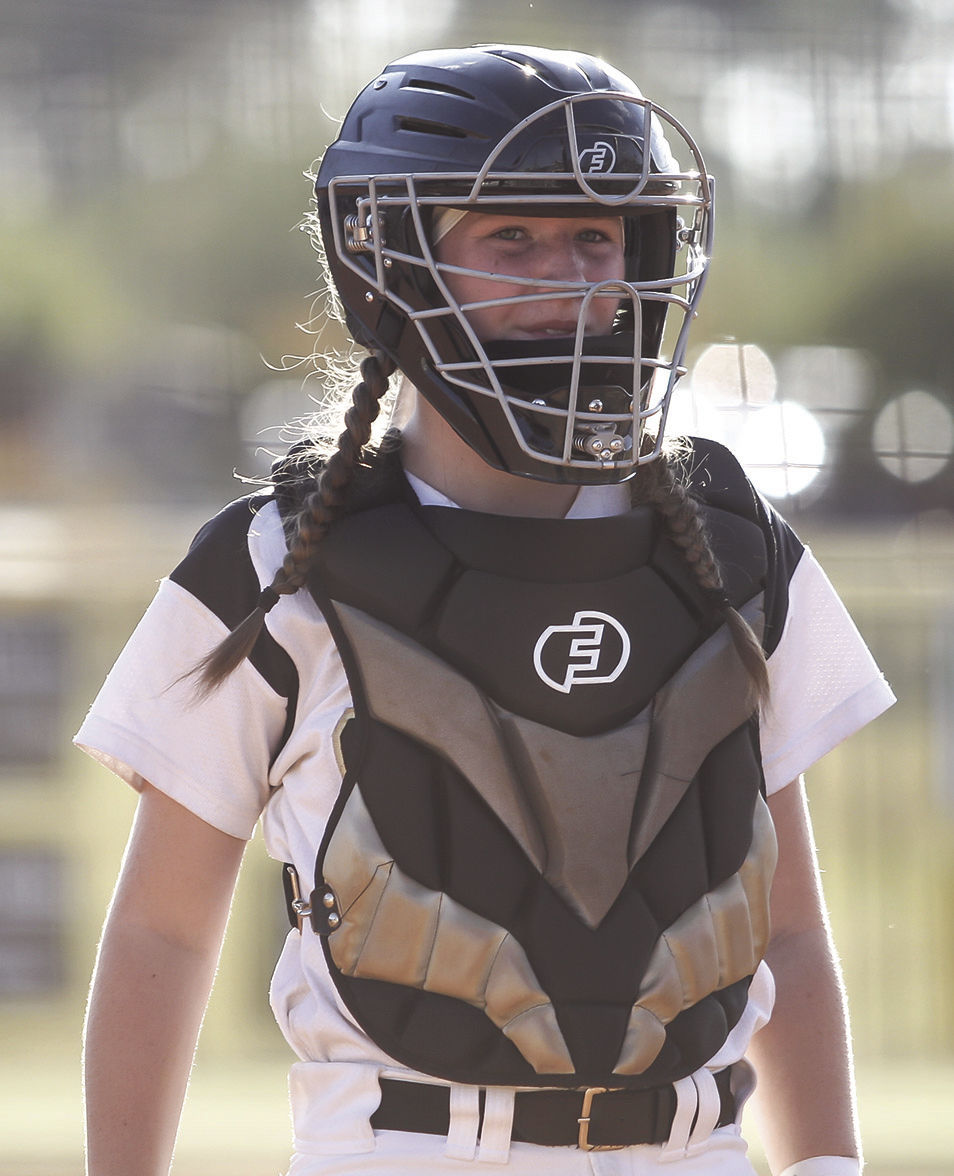 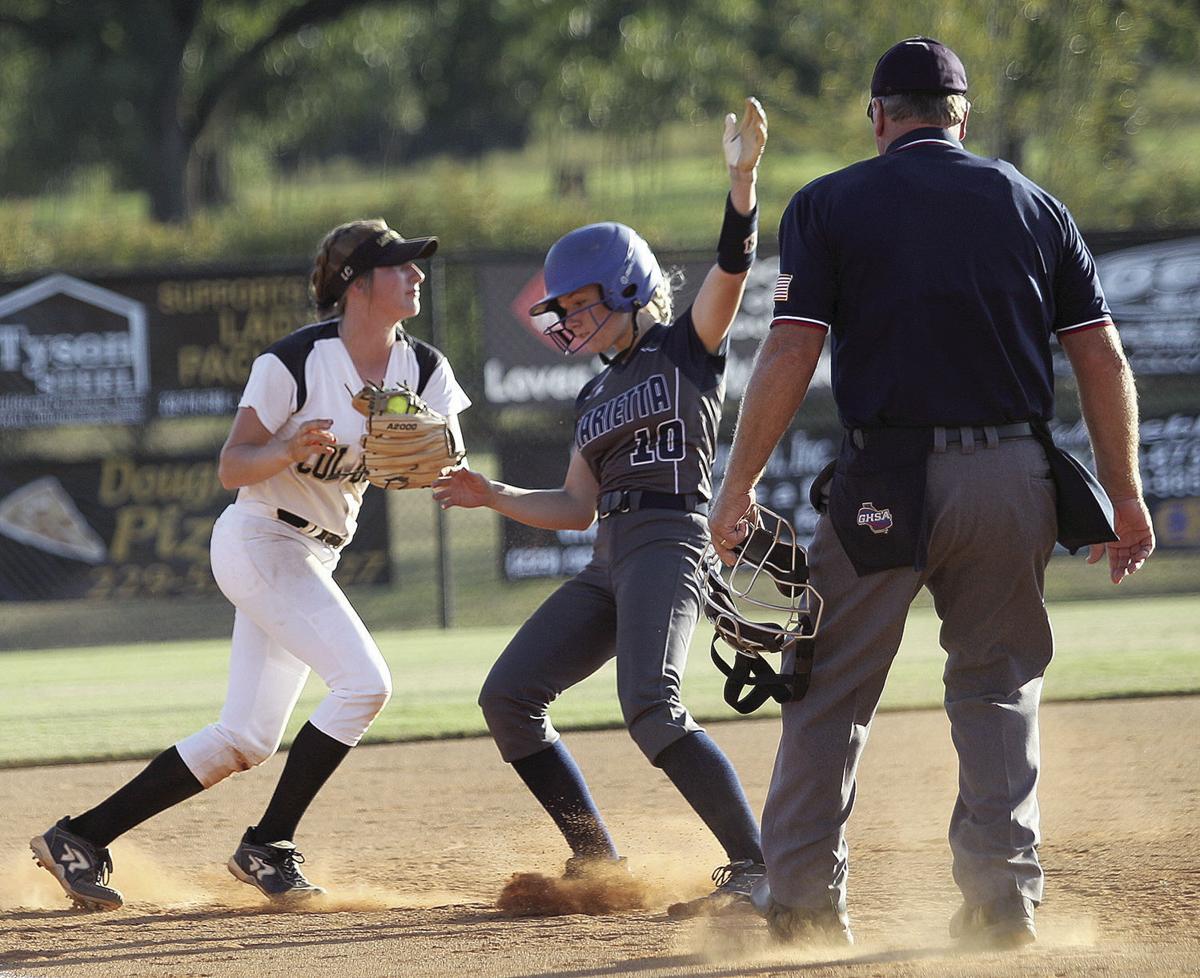 Packer junior infielder with a flawless day at third base vs. Marietta Wednesday. 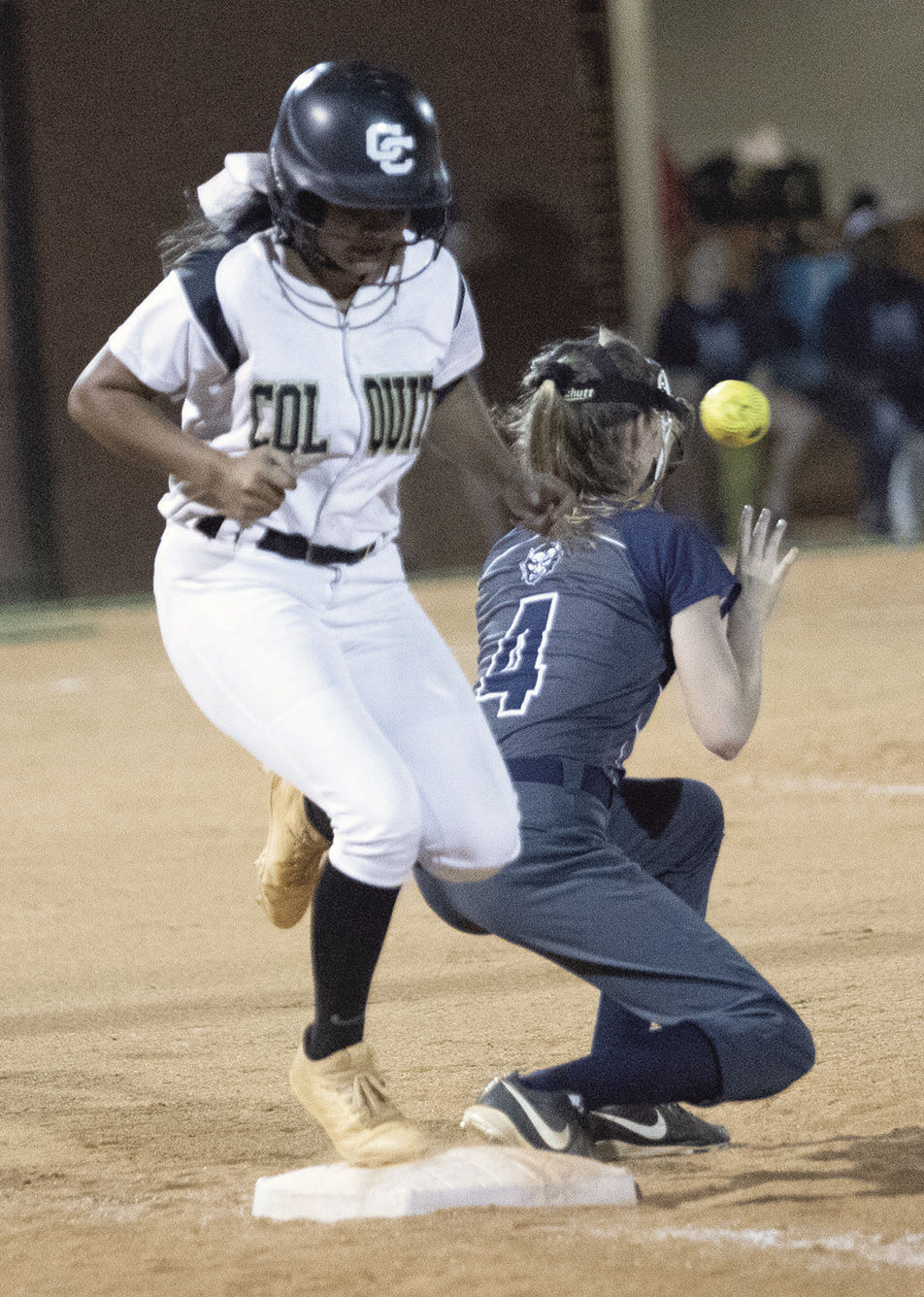 Packer senior shortstop beating out infield hit in Game 2 Wednesday. She had three RBI in the win. 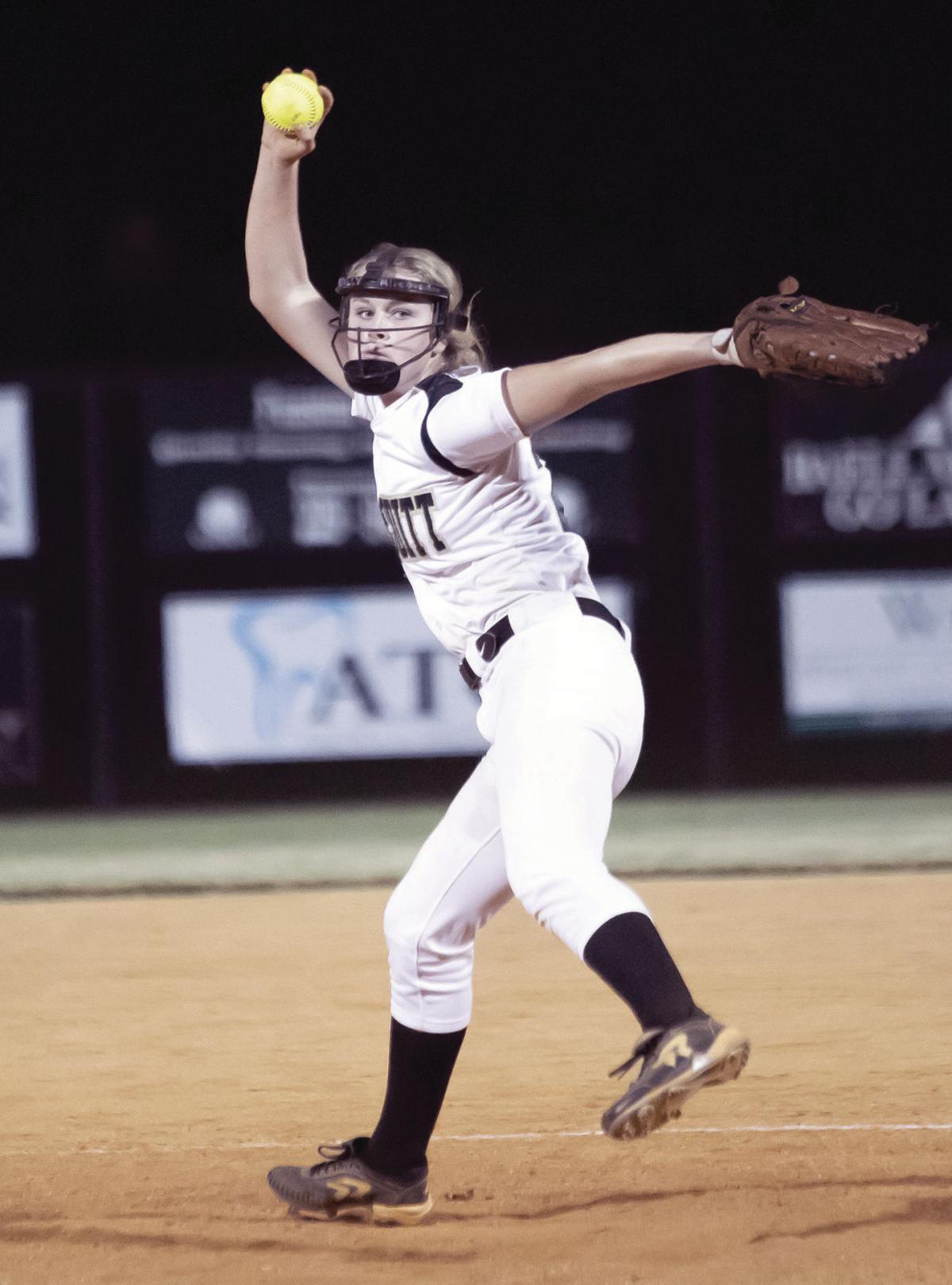 Packer junior infielder with a flawless day at third base vs. Marietta Wednesday.

Packer senior shortstop beating out infield hit in Game 2 Wednesday. She had three RBI in the win.

MOULTRIE – It’s just the way coach Chance Pitts scripted it Wednesday. Get seven RBI from two home runs by the No. 9 hitting freshman catcher to advance to the GHSA 7A second round.

With Madison Plymel – that 9th grade receiver – putting on a final exclamation point, Colquitt County High softball defeated Marietta High 16-5 in six innings Wednesday in Game 1 of their first-round series at Packer Park. Plymel hit a grand slam in the bottom of the sixth to end the contest.

She would go deep again in the nightcap for three RBI, and the Packers cruised behind 10 strikeouts from another freshman, pitcher Emily Allegood. The second game also ended in six innings, 14-5 the final.

“The work she’s put in, to be a freshman, and how she handled her first playoff atmosphere, it’s phenomenal,” said Pitts about Plymel. “She had some really good at-bats. She can hurt you when she puts the ball in play, especially over the fence. It’s great to have her in the lineup … both freshmen. Allegood pitched (great) and had some timely hits as well.”

Jade Horne pitched all six innings for the Packers getting the Game 1 win. Region 1-7A champions for the first time, Colquitt County overcame 10 hits from visiting Marietta. Two of those hits left the yard, but were only solo home runs.

Marietta was solid offensively both games but had its shortcomings in the field. That was not an issue for the Packers with the infield play of Madison’s older sister Abby at third base, ABAC-committed shortstop Kelsey Patel, Abeny Thomas (the top hitter of the day overall) at second and Marlie Wingate at first.

“That’s what they can do when they relax,” said Pitts about the picks, scoops and throws these girls made Wednesday. “It’s nice to have that core.”

Marietta led 2-0 on three hits after its first turn, but the Packers countered in their half. Thomas doubled, Abby Plymel singled and both scored on an error.

The hosts went ahead for good 5-2 in the bottom of the second using two more Marietta errors and Abby Plymel’s RBI single.

The Packers led 5-3 after three complete. The Lady Blue Devils scored one time in the third inning even as Madison and Abby paired for a caught stealing out.

Marietta was hitting throughout the game, seven safeties in the books after the top of the fourth. But third base seemed to be a good place for Colquitt to get more key outs, like when Callie Faircloth fired the ball to Abby in time from centerfield.

It was in the Packer half of the fourth that Pitts called for the squeeze bunt no less than three times. Each time, it was another Colquitt County run. Thomas brought home Faircloth, then Allegood squeezed her home after two stolen bases. Wingate also bunted the ball in play, and in all three cases the teammates beat the tag home.

With another Marietta error tacked on in the home fourth, Colquitt led 10-3.

Zoe Adams and Patty Ann Frierson each hit home runs for Marietta, Adams’ coming in the top of the fifth and Frierson in the sixth. Allegood, though, had the rare assist from right field to first base, so the score was 10-5. Allegood and Kelsey Patel drove in sixth-inning runs before the Madison slam.

As the guest on the scoreboard, the Packers were able to stake the early lead of 2-0 in the top of the first. It was another case where the Blue Devils misplayed and dropped softballs, so Thomas circled the bases on her lead-off hit. Thomas had three hits overall in Game 2.

The lead for Colquitt held until the third when Adams hit her second home run of the day. McKaela Walker, starting pitcher for Marietta, was on base with a single, and so things were knotted at 2-all.

That got the Packers’ attention, and they responded with three runs in the top of the fourth … three runs as in Madison Plymel’s second home run. They added three more in the fifth, all with two outs as Patel beat out an infield single to earn an RBI. Katlynn Powers stepped and delivered her first big hit, a home run to make it 8-2.

The heart of Marietta’s order still made some noise one last time, that in the bottom of the fifth. Walker crushed a first-pitch double to right putting two Blue Devils in scoring position. Wingate did a little hopping to catch the second out, but then Adams ripped the ball down the third-base line. With a double steal to follow, Marietta pulled to within three, 8-5.

Pitts’ lineup had too much left to show, and on five hits the Pack scored six times in the top of the sixth. With one out, Thomas doubled and Abby Plymel singled her home. Allegood’s double brought in the 10th run, and after more miscues gave Colquitt the lead at 11-5, Patel drove in two more on a single. She had a three-RBI game, and so did Powers when her gap double plated Patel.

On Tuesday, Norcross High defeated Lambert in a doubleheader sweep, so it’s Norcross who will play at Packer Park next week (Wednesday, according to Pitts) with the winner going to the Elite 8 in Columbus.

“One series away,” said Pitts. “But we are not overlooking Norcross. They are a tough opponent. If we play our game, the way we’ve played the second half this year, there’s no doubt we can wind up in Columbus. We are just looking forward to having another home playoff game, packing the stands out again. The fan support was phenomenal. Everybody in the community has either reached out or is here. It’s great to have the girls feed off that.”