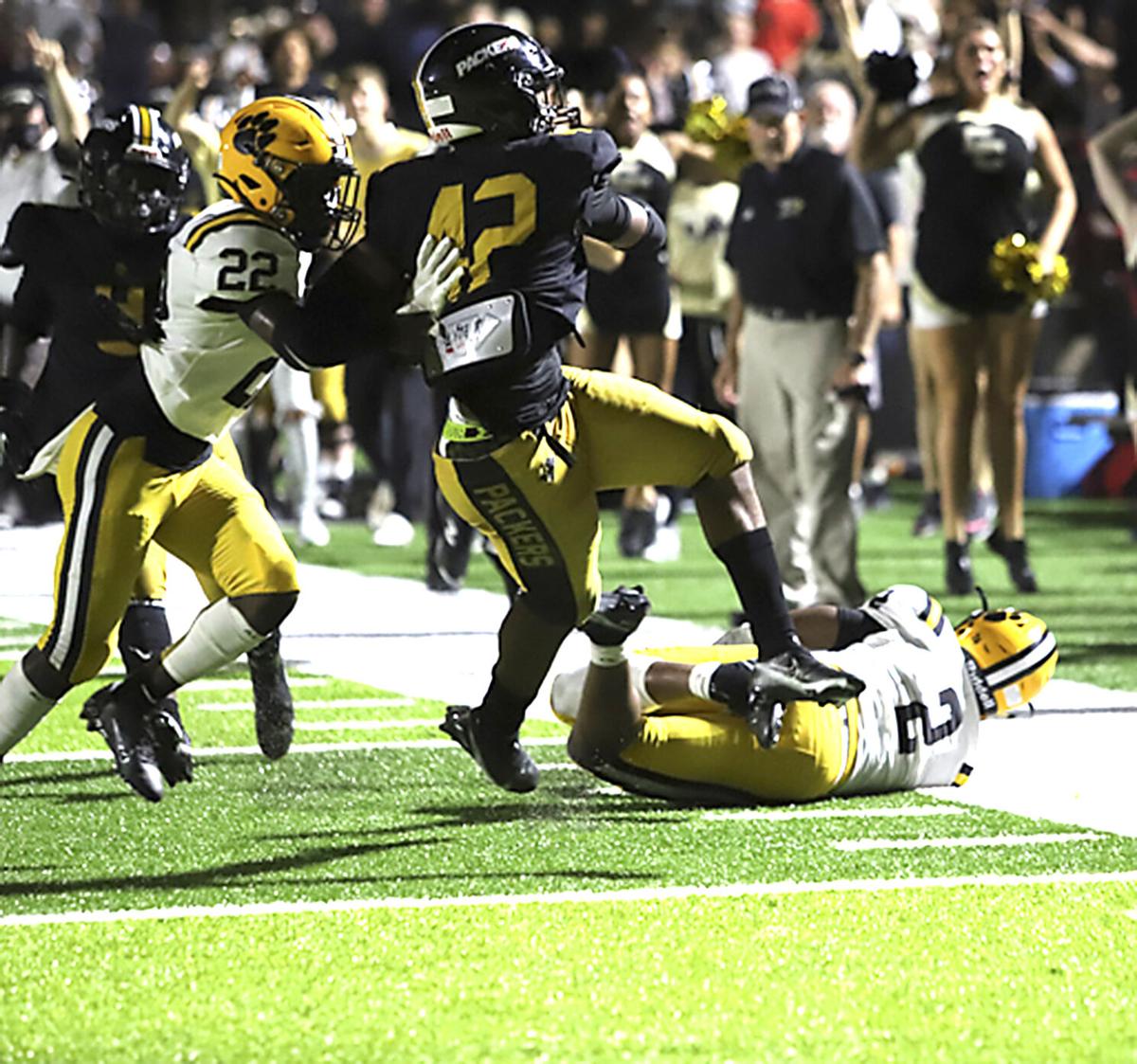 Colquitt County linebacker Gamal Wallace (42) heads to the end zone after intercepting pass in the Packers' 24-10 victory over Valdosta on Friday on Tom White Field at Mack Tharpe Stadium. 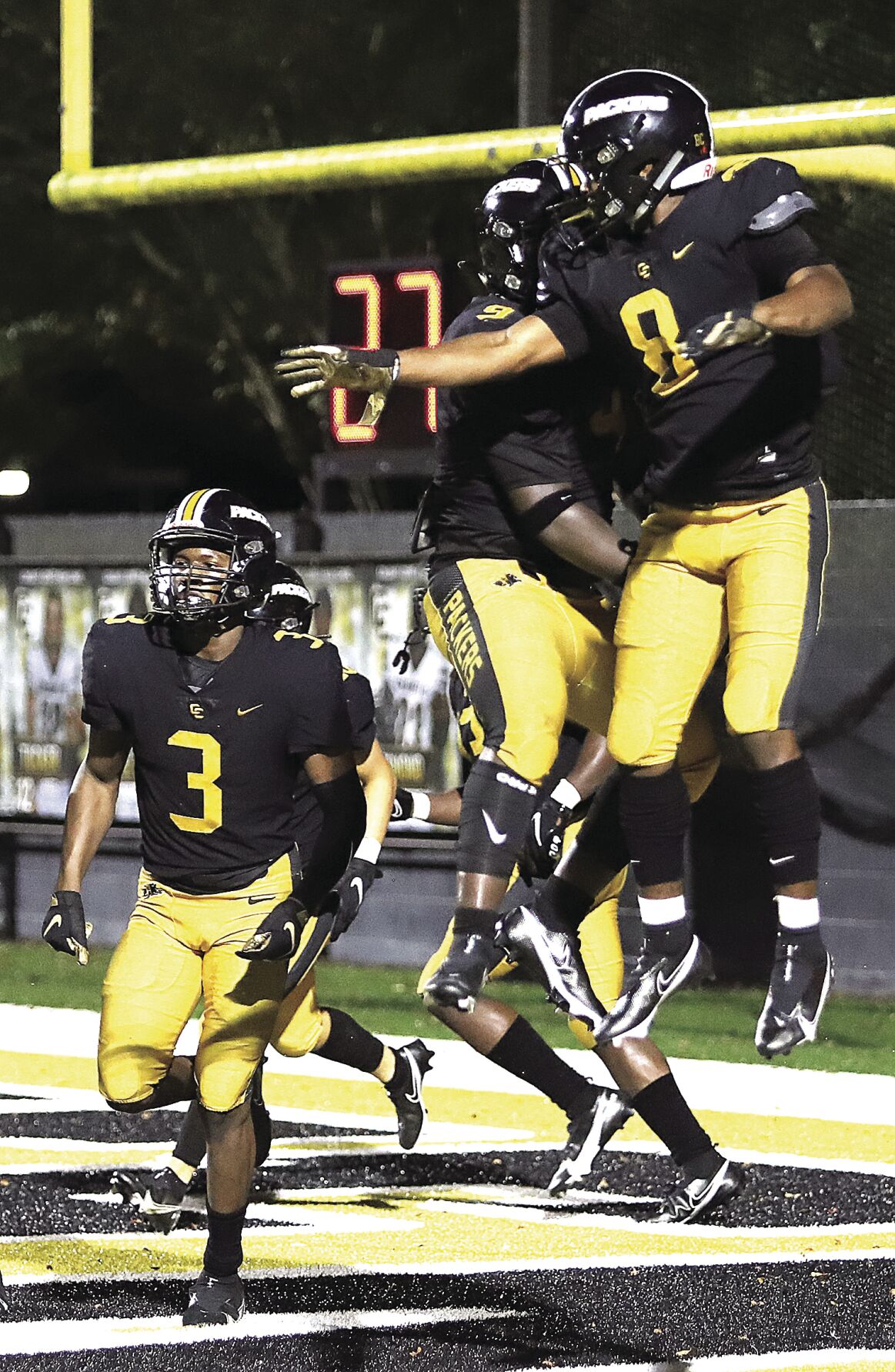 Colquitt County's Baby D Wheeler (3), Antwan Daniels (9) and Zy Brockington (8) celebrate after Daniels picked up a punt blocked by teammate TJ Spradley and ran it 22 yards for a touchdown in the 24-10 win over Valdosta on Friday.

Colquitt County linebacker Gamal Wallace (42) heads to the end zone after intercepting pass in the Packers' 24-10 victory over Valdosta on Friday on Tom White Field at Mack Tharpe Stadium.

Colquitt County's Baby D Wheeler (3), Antwan Daniels (9) and Zy Brockington (8) celebrate after Daniels picked up a punt blocked by teammate TJ Spradley and ran it 22 yards for a touchdown in the 24-10 win over Valdosta on Friday.

MOULTRIE – Colquitt County co-defensive coordinator Alan Rodemaker said his players were “gassed” at halftime on Friday with the Packers and visiting Valdosta knotted at 7-7.

The Packers looked anything but weary in the final two quarters, however, holding the Wildcats to just a field goal and four first downs and coming away with a satisfying 24-10 victory.

The game had garnered statewide interest as first-year Valdosta head coach Rush Propst was making his debut on the visitors sideline on Tom White Field at Mack Tharpe Stadium where he had led the Packers to 119 victories and two state championships from 2008-2018.

His tenure at Colquitt County had featured high-production offenses and second halves in which his Packers characteristically out-performed their opponents.

Neither of those phenomena occurred Friday night.

Valdosta, 2-0 and ranked No. 1 Class 6A going into the game, scored a touchdown with 21 seconds left in the first half and added a field goal with 1:39 left in the third quarter.

Other than that, the Wildcats had little to offer, especially in the final two quarters.

Before its final possession, which came with Valdosta trailing by 14 with 35 seconds remaining, the Wildcats had managed just two first downs, 15 passing yards and had thrown a pair of interceptions, one of which Colquitt County linebacker Gamal Wallace returned for a touchdown, since halftime.

Rodemaker, who was the Wildcats head coach the last four seasons before being unceremoniously and inexplicably dumped after going 10-3 last year, said he still expects the Wildcats to do well the rest of this season.

But he also conceded that the Packers’ victory was just a little sweeter.

Packers head coach Justin Rogers said he knew going in that the Packers were good defensively, but would struggle on offense.

“And we did struggle, but the defense bowed their back and bailed us out,” he said.

Valdosta rushed for 136 yards and threw for 155 more, but the two interceptions, a lost fumble and two blocked punts showed that a Packers team that had been in quarantine two weeks ago was further ahead of the curve defensively and on special teams than their top-ranked opponent.

The game, played in front of one of the largest crowds at The Mack in recent years, started slowly with neither team scoring in the first quarter, although the Packers got the first break when Wallace blocked a Valdosta punt in the closing seconds, giving Colquitt a first down on the Wildcats 10.

But the Packers were unable to capitalize and the Wildcats stopped Packers quarterback Xavier Williams short of the end zone on a fourth-and-goal from the 1 on the second play of the second quarter.

The Wildcats fumbled the ball away later in the quarter, but, again, the Packers were unable to make use of the turnover.

The Packers finally broke through when T.J. Spradley blocked a punt with 3:07 left in the first half. Sophomore linebacker Antwan Daniels picked the ball up and ran 22 yards to the end zone.

Emmanuel Perez added the extra point and the Packers had a 7-0 lead.

But Valdosta quickly countered, driving 90 yards to what would be its only touchdown.

Quarterback Amari Jones had two big completions in the drive, one an 18-yarder to Nevin Spivey and the other a 33-yarder to Aalah Brown.

Jones capped the drive with a 9-yard touchdown strike to Javonte Sherman and Angel Martinez tied the game with the extra point with 21 seconds left in the half.

As it would happen, Jones completed just four passes for 50 yards for no touchdowns and two interceptions the rest of Valdosta’s frustrating night.

But Colquitt held, forcing a 25-yard Martinez field goal that gave the Wildcats a short-lived 10-7 lead with 1:39 left in the half.

Williams and Lemeke Brockington had just missed connecting twice earlier in the game on passes that appeared destined to be long touchdowns. Both fell incomplete.

But on a second-and-5 from the Packers 38, Williams hit the Packers streaking receiver in stride in front of the Valdosta bench for a 62-yard score that helped put the Packers up 14-10 with 13 seconds left in the third quarter.

The Packers sacked Jones twice on Valdosta’s next possession and after a punt and a 31-yard Williams run, Colquitt pushed its lead to seven points on a 25-yard Perez field goal with 8:41 left in the game.

Perez then kicked off into the end zone and the Wildcats set up shop on their 20.

Jones was stopped for no gain on first down and on second down attempted a short pass to the right flat.

Wallace was the only player in either color jersey in the vicinity and he grabbed the ball and took it 17 yards, bowling over a pair of Wildcats, to the end zone.

Perez added the final point of the game to give Colquitt a 24-10 lead with 7:55 remaining.

Valdosta punted away its next possession without making a first down and a diving interception by Colquitt’s Omar Daniels ended the next with 1:37 left in the game.

The Wildcats got the ball one more time, but only 35 seconds were left before it was time to get on the bus.

Rodemaker couldn’t say enough about his troops. He said Valdosta knew what defense he was likely to employ and often used two backs and a tight end to attack it.

“I really thought they did an excellent job,” he said of his former team. “But we were fortunate and somehow, we kept getting off the field.

“And in the second half, we really did get after them.”

He seemed pleasantly surprised the Packers were able to play as well as they did without the practice and conditioning they would normally have had at this time of the year.

The Packers held Jones to just 10 completions in 28 attempts.

Williams finished 13-for-20 for 188 yards and the touchdown strike to Brockington. He threw two interceptions, but the Packers defense made sure they didn’t matter.

A senior in his first year as a starter, Williams also was the Packers leading rusher with 48 yards on 13 carries.

Colquitt had 96 net rushing yards, but was more effective on the ground in the second half, especially when Williams carried the ball.

The Packers, now 2-0, will travel to Dothan, Ala., to play the Wolves next Friday.

“We’re not any closer to winning a region title or a state title, but it’s always good to beat your rival,” Rogers said.

PACKERS NOTES: Valdosta did not use heralded quarterback Jake Garcia, who transferred from his California high school when it decided not to play football this fall. Garcia completed 22-of-34 passes for 332 yards and two touchdowns in the Wildcats season-opening victory over Warner Robins, but did not play against Bainbridge last week because of an injury.

Garcia’s transfer is being investigated by the Georgia High School Association.

The game was the 106th meeting between the Moultrie/Colquitt County and Valdosta and was the Packers 31st win.

Colquitt now has won seven of the last eight meetings in the rivalry that started in 1913.

The Packers now have extended their home winning streak to 19 games. The last loss on Tom White Field came in October of 2017 against Tift County.

Brockington’s touchdown catch was his 20th as a Packer.

Tajh Sanders, who started for the Packers at wide receiver last year as a sophomore but transferred to Valdosta this year, was held without a pass reception. He was Valdosta’s leader heading into the game with 10 catches.