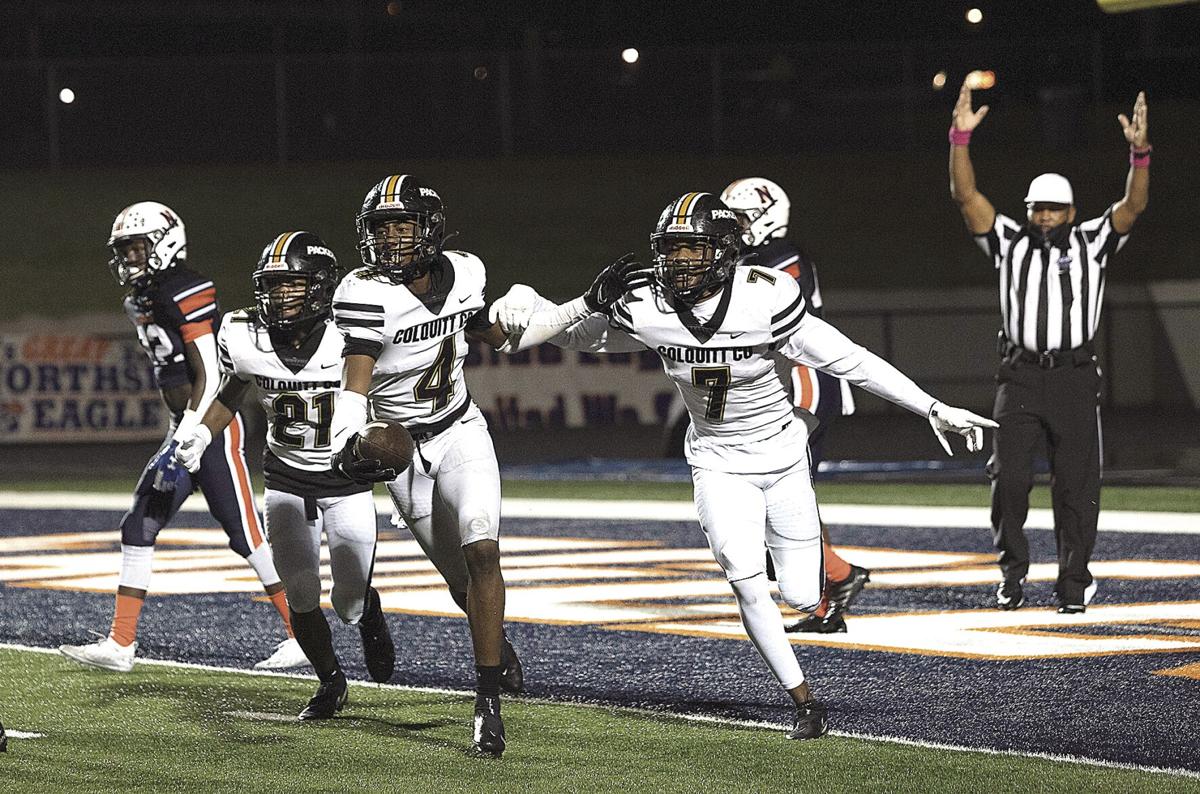 Colquitt County's Jaheim Ward (4) celebrates with teammates Traveon Tuff (21) and Ontavious Carolina (7) after scoring a touchdown when he recovered a blocked kick in the victory over Northside-Warner Robins.

Colquitt County freshman tight end Landon Thomas (86) heads to the end zone to score his first varsity touchdown after catching a pass from quarterback Xavier Williams in the 63-14 victory over Northside-Warner Robins.

Colquitt County's Jaheim Ward (4) celebrates with teammates Traveon Tuff (21) and Ontavious Carolina (7) after scoring a touchdown when he recovered a blocked kick in the victory over Northside-Warner Robins.

Colquitt County freshman tight end Landon Thomas (86) heads to the end zone to score his first varsity touchdown after catching a pass from quarterback Xavier Williams in the 63-14 victory over Northside-Warner Robins.

MOULTRIE – If Colquitt County is unable to find an opponent to fill this Friday’s open date and there are no more cancellations, the Packers’ 63-14 victory over Northside-Warner Robins last Friday marked the halfway point in an eight-game regular season.

Packers head coach Justin Rogers was hoping to find a school to play and give the Packers another tune-up before the three-game Region 1-7A part of the schedule kicks on Oct. 30 when Camden County visits.

But if not, the Packers will get a chance to let some bumps and bruises heal and get over the mental fatigue built up over the last few frustrating months.

It also provides a time of reflection over the performance of a relatively young and inexperienced team that has defeated Banneker, Valdosta, Dothan and Northside on successive Friday nights in a season that started four weeks later than anticipated because of the pandemic.

When asked if he was pleased with where his team is, he replied, “Under the circumstances, yes.”

He pointed out that like every other program in the state, the Packers missed spring and summer practices, had a restrictive schedule beginning June 8 and did not have a preseason scrimmage game.

Then, unlike many other, although not all, football programs in the state, his team was quarantines for three weeks, costing the Packers games against Marietta and Brookwood.

“So, we are progressing,” he said. “But we’ve still got a lot of fundamental things to work on.”

The lack of preparation for the season caused a delay in determining who the team’s starting quarterback would be.

Senior Xavier Williams transferred from Ola High School in Henry County, where he was the team’s backup as a junior last year.

The competition between the two was keen and it just a few days before the opener against Banneker that Rogers decided on Williams.

Rogers said that teams that had returning quarterbacks had a true advantage this year.

“Teams that didn’t have a quarterback coming back are just starting to see them settle in,” Rogers said.

And Williams has been no different.

“You can see his poise now,” Rogers said. “He is starting to feel comfortable. You know, there’s just substitute for experience.”

Through four games, Williams has thrown for 857 yards and 12 touchdowns, including four in each of the last two games.

Touchton has not appeared intimidated in his appearances either and has completed 10-of-14 for 160 yards and had his first touchdown passes of the season against Northside.

Another question mark was the offensive line, where only Trey McCoy was back, and he was moved from center to left tackle.

“They are coming along,” Rogers said. “They are doing a great job with assignments and identifying different fronts. And there have been very few mental breakdowns.”

Because a lack of experience before this season, there are some fundamental issues the group is working on.

“We’re still working on pad level, feet movement and hand placement,” Rogers said. “Coach (Buck) Hansen is doing a great job with those guys and they continue to get better.”

Running back Jamaree Hill and the Pace brothers — Charlie and Nick — have run hard and have been solid.

With Lemeke Brockington and Baby D Wheeler, the Packers have two of the top receivers in the state. They have been reliable and productive.

Emmanuel Perez has been perfect on extra point attempts, can reach the end zone on kickoffs and been adept with his punts.

The defensive front and secondary have been as strong as predicted.

Senior outside linebacker Gamal Wallace has been a big-play maker and provides another veteran, steadying influence.

Perhaps the biggest surprise in the early going has been the contribution of four freshmen: Daniels, running back Nick Pace, tight end Landon Thomas and punt returner Ty Lamar.

After the homecoming game against Alcovy on Oct. 23, the level of competition will increase, especially with home games against Camden County and top-ranked Lowndes.

But Rogers said he expects his players to continue to play hard and perform well.

“We’ve got guys who grew up here, who love the community and want to be Packers,” he said. “They have a pride in their uniform.”