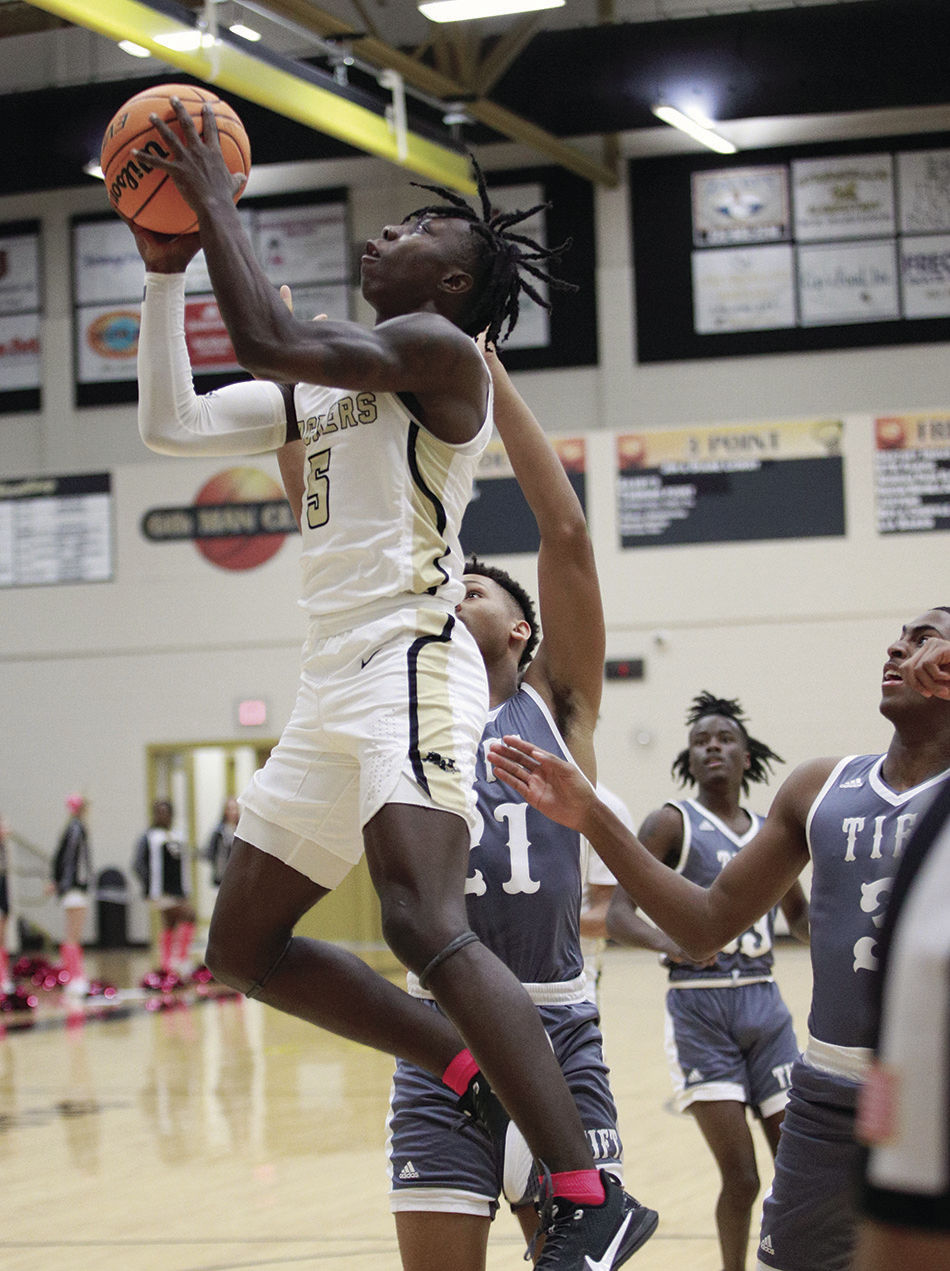 Omarian Daniels had a big weekend off the bench in two Colquitt County High Region 1-7A basketball wins. 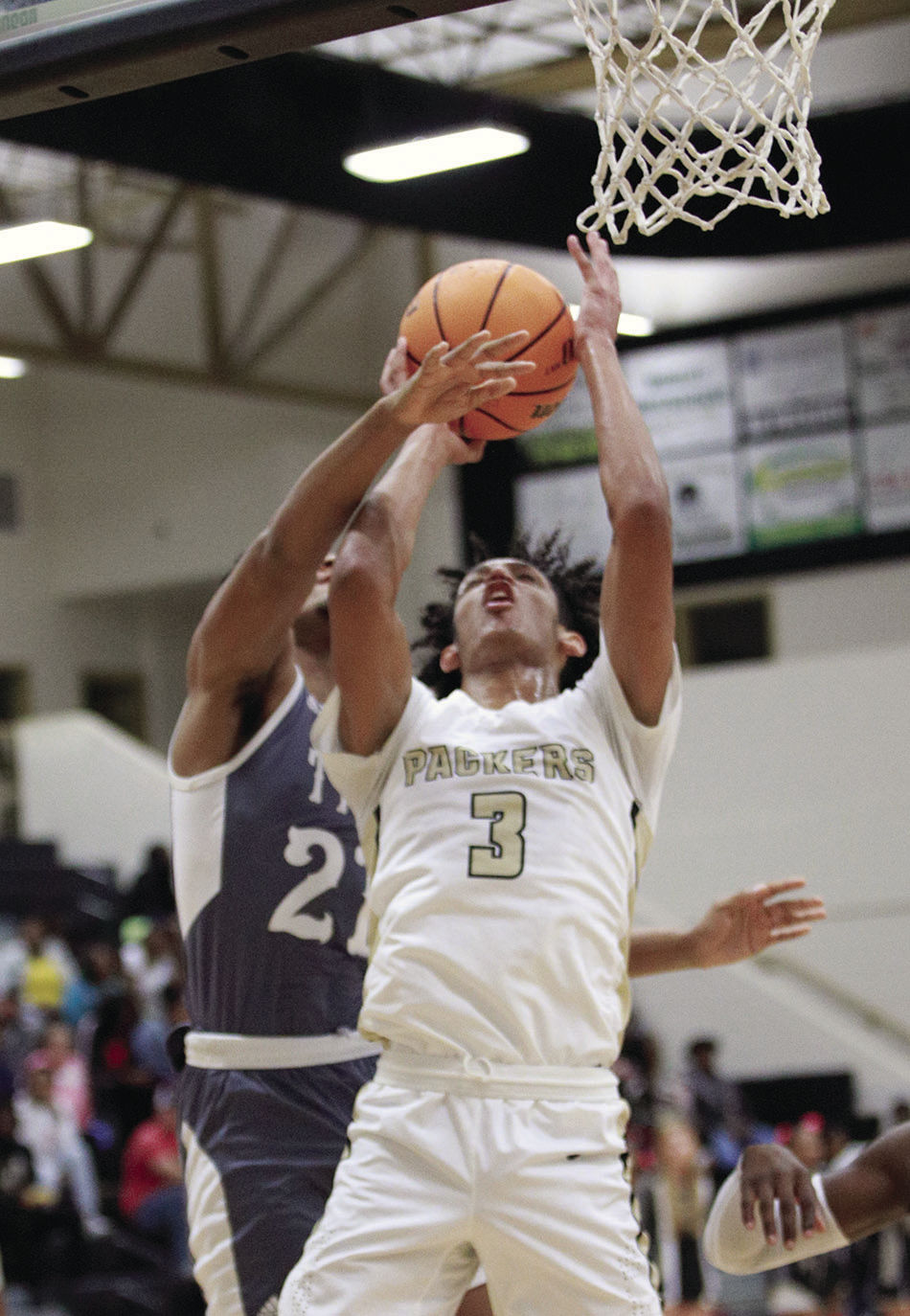 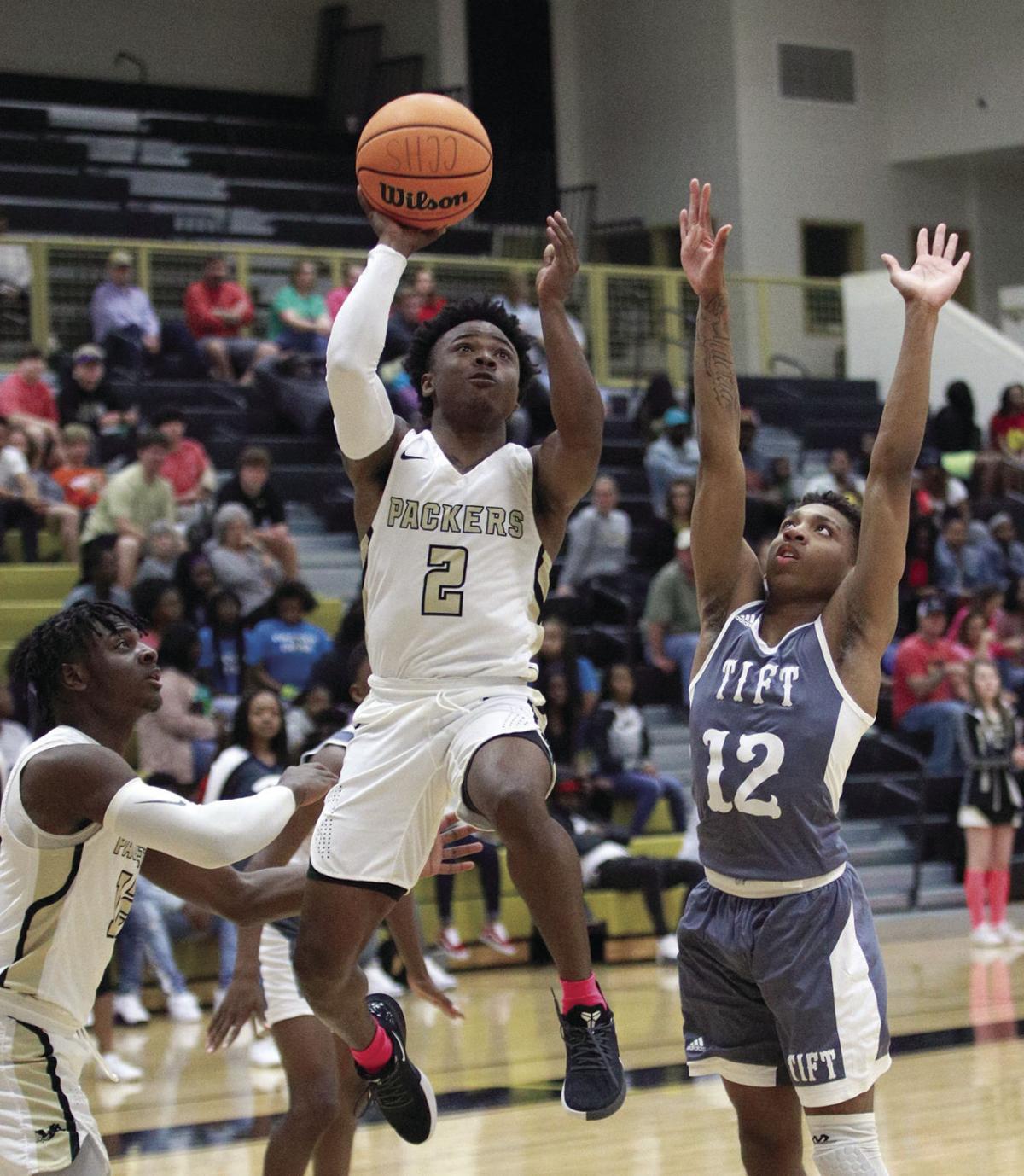 Montavious Ponder made the defensive play of the game for Colquitt Saturday knocking away Tift County's chance at a tying 3-pointer. 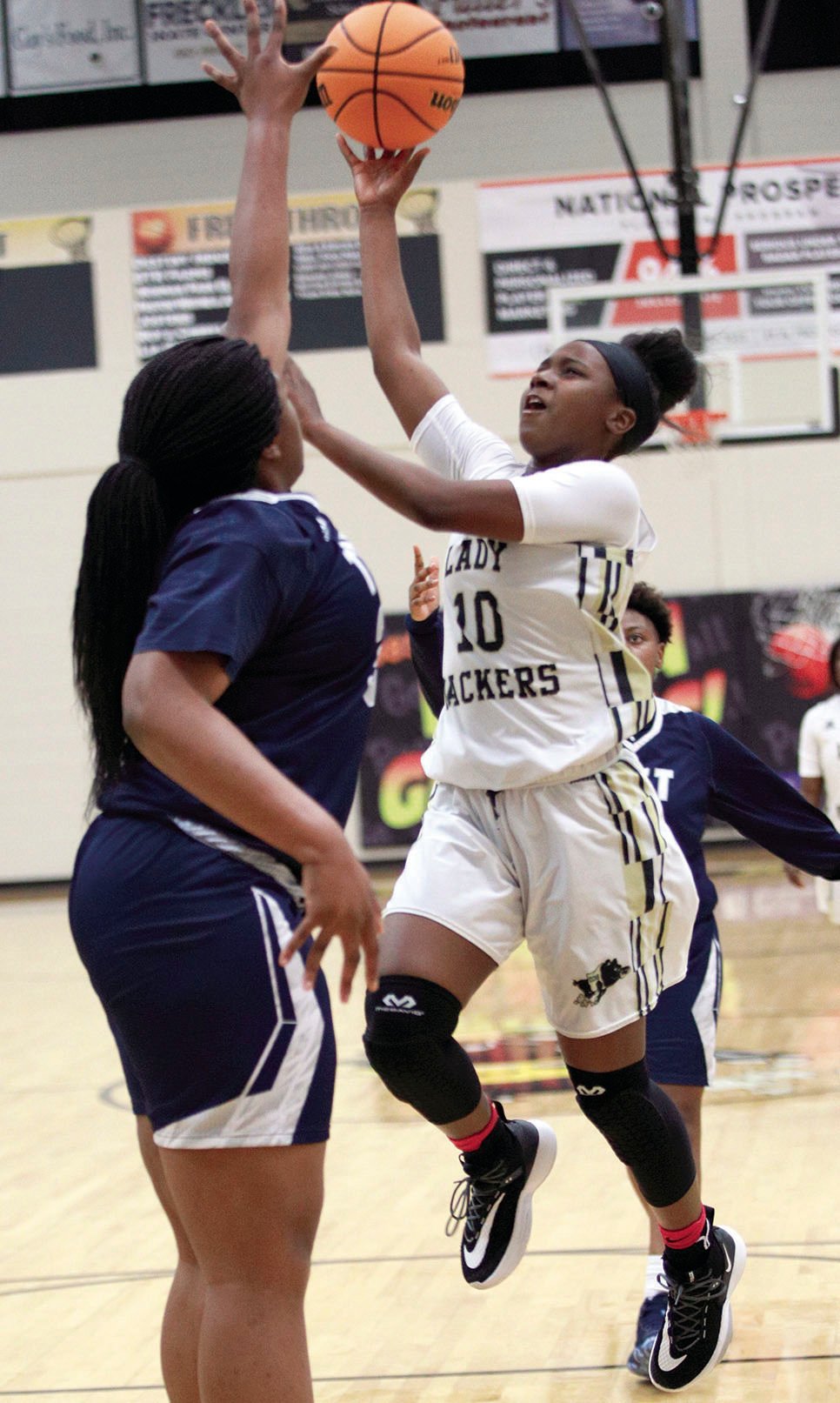 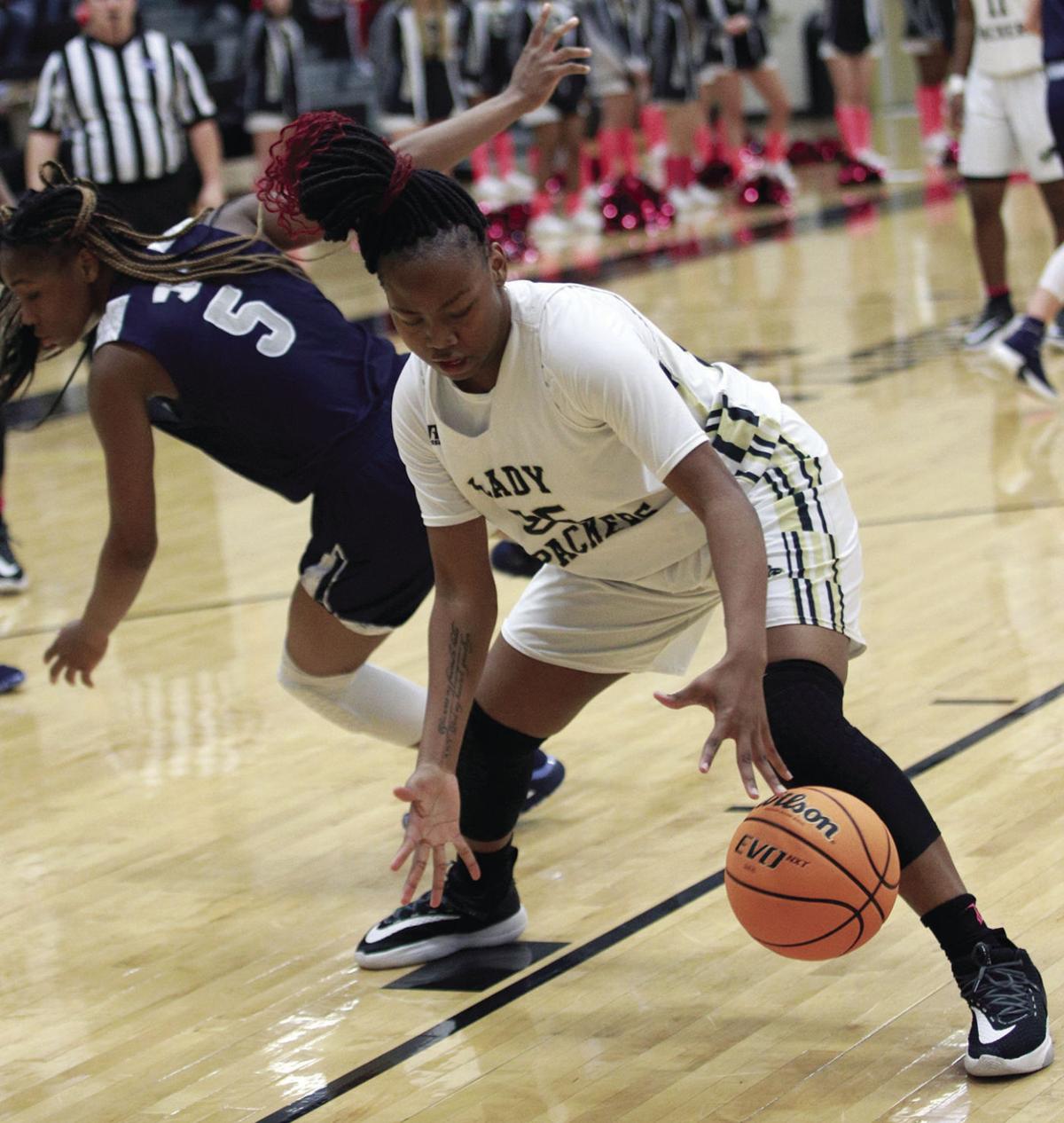 Keyana Harper inside for the Colquitt girls Saturday.

Omarian Daniels had a big weekend off the bench in two Colquitt County High Region 1-7A basketball wins.

Montavious Ponder made the defensive play of the game for Colquitt Saturday knocking away Tift County's chance at a tying 3-pointer.

Keyana Harper inside for the Colquitt girls Saturday.

MOULTRIE – A decade was just completed with no Colquitt County High boys basketball victories against Tift County. Before that, most of the previous decade ended with a whole lot of Blue Devil triumphs on the hardwood from Moultrie to Tifton.

Then, on Saturday, Montavious Ponder put in an early candidate for Play of the 2020s Decade, if not for the year 2020. Ponder broke up Tift County’s chance for a tying 3-pointer in the final seconds on William Bryant Court, and Colquitt County defeated the Blue Devils for the first time since early in the 2000s decade 63-60.

It also put the Packers of coach Tremaine Facison at 2-1 in Region 1-7A. Tift County was coming off a home loss to Camden County on Friday and dropped to 1-2 in the region.

While Colquitt County never trailed in Saturday’s contest, the Blue Devils fought back from a 15-point deficit. In the fourth quarter, J.T. Warren’s three-point play tied the game 46-46. There was 4:25 remaining in regulation time, and Colquitt County – which hadn’t been much of a free-throw shooting team for most of the game – used the charity stripe to create another margin as wide as eight points.

Ponder scored the go-ahead basket answering what Warren did, and then he and Elijah Scott sank four foul shots in a row. When Tift tried a full-court press, Ponder found Di Williams wide open up court, and he staked the Packers to a 55-48 advantage.

But after adding six more to the total from the line, Colquitt missed six in a row. Tift County would go on a 7-0 run capped by Tyler Parker’s 3-pointer with 11 seconds on the clock. Parker single-handedly kept his club in the game with a strong fourth quarter, including six points in the early going.

The Blue Devils, down 61-60, put Tyler Walker on the foul line with eight seconds to go. The first one good, the second one off the mark but rebounded by teammate Aaron Long in the lane. Facison got a quick timeout called, and then Scott was fouled taking the inbound. He was also 1-for-2 in this trip, but it’s why the Blue Devils had to try a quick 3 in a little over five seconds.

Scott finished the game with 19 points and Ponder had 17.

For Scott, it was one of his more aggressive games around the rim with about all of his scoring damage done inside. As Williams contributed a 3-pointer, Scott fought for an offensive rebound basket in Colquitt’s opening 9-2 run. Williams assisted Scott’s next inside hoop to make it 13-5.

Omarian Daniels was on the end of a successful press break by the Packers, who took a 22-11 advantage into the second quarter.

Ponder and Walker scored off steals as the Packers took the biggest lead of the night, 33-18. Daniels found open space to go to the rim and make the score 35-20. That was his team’s last field goal of the half, though Colquitt possessed the basketball most of the time. They also caused a turnover by Tift with three seconds on the clock and took a 37-24 lead into the half.

Where Colquitt’s offense was when the second half began is a mystery. The defense showed up, three steals by Williams alone and Daniels’ shot block. Tift still managed seven points in a row with intentional foul free-throws and Warren’s put-back. Ahead 37-31, the first points for Colquitt were at the line at the 4:08 mark. The first basket before the clock hit 3:00 as Scott penetrated and put back his own miss with the kind of intensity he showed in the first half.

Dijmon Wheeler, getting playing time with Lemeke Brockington – fellow football receiver – out to attend an all-star gridiron game, used glass for a second-chance basket. It was only the second for Colquitt in the period, so the lead was down to eight, 43-35, for the fourth quarter. The Packers only had one FG for 3:35 of the last quarter, that on Scott’s baseline dribble.

With four of the Lady Blue Devils scoring in double figures – and Colquitt County leading scorer Janiah Ellis held without a second-half field goal – Tift County stunned the Lady Packers of coach Rondesha Williams 63-45 in Region 1-7A action. It sent Colquitt’s girls to 2-1 in the region, and it raised Tift’s record to 2-1 as it was coming off a home loss to Camden County the night before.

Colquitt freshman Carliss Johnson led all scorers with 19 points while Ellis, who made all of her free throws in the second half, had 15. Tift was led by Shakiria Chaney’s 16 points. Nicky Jones and Cali Conner each scored 12, and center Jamia Level – a matchup nightmare inside for Colquitt – scored 11.

The Lady Packers were about shooting the 3 for most of the first quarter. Ellis’ only make was her first attempt, and Camille Singletary hit as Ellis reversed the basketball in her direction. But as Daejah Bailey of Tift penetrated and scored, the visiting team led 9-6.

The game moved inside as, at 1:28, Gracie Belle Paulk converted Singletary’s pass to the post. Level, however, put back an offensive rebound and went to the opposite end to block a shot. That led to a fast break, Conner assisting Jones in the end. Ellis used Paulk’s screen to score, but the Lady Packers were looking at the wrong end of a 13-10 score at the quarter’s end. It was also one full of giveaways by Colquitt even as Keyana Harper stole two passes inside.

With the first possession of the second period, Johnson connected for long range to tie the game. She answered Level’s low-post basket with 3 and Colquitt’s only second lead of the game, 16-15. As Tift County went cold from the outside, Ellis went end-to-end from a rebound, but hers was Colquitt’s last make of the half.

Bailey put back a shot from Conner’s steal and, with 2:55 still to play in the half, the Lady Blue Devils went back ahead 20-18. Chaney converted Bailey’s pass inside, and despite missing four foul shots in a row to close out the half, Tift County was up 22-18.

Johnson threw in five points in a row for the Lady Packers to open the second half. Level was missing shot after shot inside, but Chaney and San Graddic put back her misses for a total of five Tift points. Colquitt was next to go on a streak of seven straight with 3 by Johnson.

But the Lady Blue Devils didn’t just have the 6-1 Level. 6-2 freshman Janie Ragsdale came off the bench and seriously impacted the second half. She took a lob feed from Chaney inside for 2, then blocked Colquitt on the other end. This jumpstarted a fast break finished by Chaney.

Chaney was fouled on the play, missed her free too, but Conner rebounded and earned her own three-point play. This was part of a 13-0 Tift run capped by Level’s offensive rebound bucket. Though Harper’s put–back was the last scoring of the third, it was the Lady Blue Devils in control at 40-32.

GROVETOWN, Ga. - Kim Singletary Land died Saturday, January 18, 2020 at her residence in Grovetown. Funeral services are pending at this time. Cobb Funeral Chapel has been entrusted with arrangements.

Mr. Leonard G. Lindsey, Jr., 91, of Adel, Georgia, passed away January 17, 2020 at the Legacy Village in Moultrie, Georgia. He was born April 10, 1928 in Colquitt County to the late Leonard G. Lindsey, Sr. and Opal Harrison Lindsey. Mr. Lindsey lived most of his life in Cook County and was t…

Mr. Raymond Pinkard Howell, 76, of Sumner, died on Thursday, January 16 , 2020 at his residence. The funeral service will be held at 2:00 PM on Tuesday, January 21, 2020 at Damascus United Methodist Church, interment will follow in the Damascus Cemetery. The Rev. Chuck Knight and Rev. Ronnie…